EgyptAir, a member of the Star Alliance, announced the launch of the new “Comfort Class” on its international flights for its recently-acquired Airbus A220-300 aircraft.

Tickets for this class will be offered on the front seats available in this model – from the first row of seats to the third row.

Customers traveling on this degree will enjoy many advantages during their trips, which include the completion of travel procedures through business class counters, carrying two bags weighing 32 kilograms each, in addition to a handbag weighing a maximum of eight kilograms, having the priority of boarding and other advantages, the EgyptAir Holding Company Chairman Ahmed Adel said on Tuesday.

Tickets will be available at lower prices than the Business class tickets that were available on this model, he added.

The Comfort Class tickets have been made available starting Tuesday on a number of EgyptAir international destinations, including Beirut, Istanbul, Sharjah, Moscow, Qassim, Amman, Erbil, and Muscat.

It will also be available during the coming period on other destinations such as Vienna and Athens. 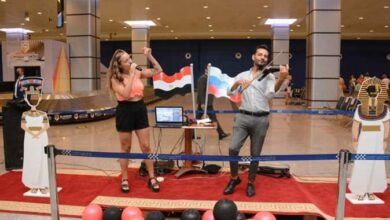