The Arab African International Bank (AAIB) is the first Egyptian financial institution to adopt the Equator Principles, a set of voluntary guidelines to ensure that banks lend money in an environmentally and socially responsible manner. AAIB signed a commitment last year to follow the principles and is currently implementing changes to conform their banking practices.

"If money is power, you have to make sure money is well allocated to people who respect the environment and social morals," says Dalia Abdel Kader, the head of marketing and communications for AAIB.

The principles only apply to project finance, money given to a borrower for a specific project, as opposed to working capital, money for day-to-day operations.

Critics see this as a major loophole. For example, banks could lend money to a tobacco company to fund its business operations and still adhere to the principles because the money is not classified as project finance.

"To say we cannot [fund] tobacco on a project finance basis but that we can finance them on a working capital basis is really a distinction that does not fit in the spirit of the Equator Principles," said Cornelis Koops, AAIB’s head of Risk Management. "If you don’t touch tobacco, you don’t touch tobacco. It’s that simple. That’s the way I see it."

The idea for the Equator Principles started in 2002, when a group of commercial lenders approached the International Finance Corporation (IFC), the private sector arm of the World Bank operating in developing countries. A year later they developed the principles based on IFC performance standards. The IFC, unlike commercial banks, follows these guidelines universally.

"Some organizations are asking commercial banks to go beyond project finance," says Greg Radford, director of the environment and social development department for the IFC. "At IFC we apply our performance standards to all our lending."

Currently, AAIB is in the process of implementing the standards, which could take years to reach maturity. Koops explains that in a big institution a large change takes time to filter through to all the different departments. He says it will be important for sales teams and individual branches to learn the principles because potential clients need to know early on that they will be scrutinized for the environmental and social impact of their project.

"The big challenge is an internal one to get everyone to understand these principles and to actually think along these lines," he says.

Like at many banks, the responsibility for the Equator Principles at AAIB falls within the risk department. This is because a project will be analyzed for its social and environmental impact, in much the same way it would be analyzed for its financial risks.

The first step in the analysis, according to Koops, is a baseline assessment on the potential impact of a project. Since banks are not experts in these issues, they usually hire consulting firms to conduct the analysis for them.

The impact is determined both in terms of the environment and people. For example, the influence of a project on migratory birds is considered, as is forced displacement of the local population. The project will be classified as an A, B or C, with A being a heavy impact and C being low impact.

Following the Equator Principles will not guarantee eliminating negative social or environmental effects. Instead, the principles aim to minimize detrimental impacts. For example, if the construction of a factory displaces local residents, the principles are supposed to make sure they are moved in a humane way.

After the impact is determined, the department in the bank that oversees the principles will analyze the assessment and decide if the borrower can feasibly conduct the project in accordance with the principles.

Although AAIB is the first Egyptian bank to sign the principles, it is not the only bank in Egypt using them. Many foreign banks have signed on from abroad and have a compliance officer to ensure their subsidiaries follow corporate rules.

AAIB expects, however, that other local banks will now sign them as well. The bank, along with the IFC, held a workshop last October for other banks about the Equator Principles, which it said was well attended.

"From a banking perspective you have to make sure your profit is sustainable,” says Abdel Kader, who also spearheads corporate social responsibility for AAIB. “And what we’re saying is if you lend to someone who undertakes social or environmental violations, it is quite probable that you’re not going to get your money back.”

Sisi directs to proceed with comprehensive development of Sinai 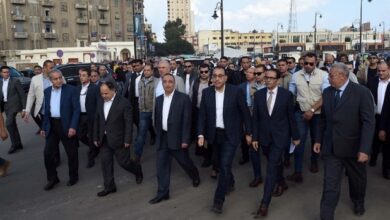 PM visits Alexandria to follow up progress of development projects