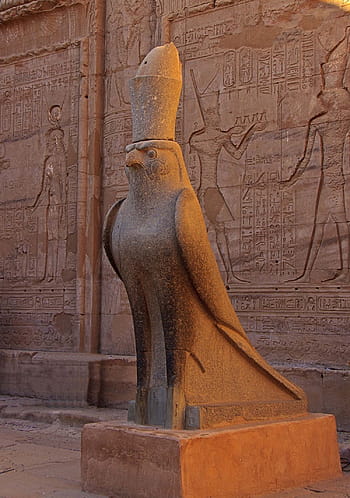 The Egyptian-German joint archaeological mission operating in the Koam al-Hetan area of Luxor’s west bank has discovered a “huge” statue of Horus, during excavations at the site of the remains of The House of Millions of Years temple for Amenhotep III.

The statue, which depicts the god Horus standing in his kilt in the shape of a falcon, is made of black granite and measures in at 1.85 meter long, Director General of West Luxor Antiquities Fathy Yassin, said in a statement on Thursday.

The statue is without legs and has broken arms as well, he added.

The discovery comes in the context of a long-term restoration project of the statue of Memnon and the Temple of King Amenhotep III, which began in 1998 under the supervision of the Ministry of Antiquities and the German Archaeological Institute.

The aim of the project is to preserve the remains of the temple and rebuild it again, said co-head of the Egyptian-German mission Horig Sorosyan.

She stressed that the discovered statue was in good condition and of an important artistic, scientific and archaeological value, as it would contribute to presenting the full image of the temple, especially after its collapse after a devastating earthquake in the twenty-eighth century BC.

Stones were used to build temples and other royal statues in the Ramesside era, she pointed out, adding that the statue in question is currently undergoing restoration.

The mission, meanwhile, will continue to search for the missing legs of the statue.

The Egyptian-German archaeological expedition previously discovered a number of large statues depicting deities, Amenhotep III, and his wife Queen T, in addition to a significant number of statues of the goddess Sekhmet.

Amenhotep III accumulated various Sekhmet statues in his temple The House of Millions of Years in order to protect it from danger.