When Radwa Rostom was just a civil engineering student at Cairo’s Ain Shams University, she participated in various charitable activities for underprivileged communities in the city’s informal settlement of Ezbet Abu Qarn. After finishing her studies, the young woman returned with a small team, with aims of bringing more than just food: she wanted to greatly improve the quality of life for the local residents, many of whom live in poverty.

Immediately after graduating Rostom trained with environmental engineering companies, seeking to acquire the technical skills to make her dreams a reality. She would later work for an environmental consultancy firm, a solar power company, and a Belgian construction firm operating in areas affected by desertification.

Rostom, who started her first housing rehabilitation project in 2015, realized she would need to set up her own company to bring her ideas to life. The following year she founded “Hand Over”, an Egyptian social enterprise integrating construction into community development.

This year, it was nominated for the Aga Khan Award for Architecture.

Lamenting the reality of expenses for most buildings, Rostom says “Many companies design and build grand apartments, airports and buildings using traditional methods, which only a certain category can afford.”

“My dream has always been different – I wanted to build ‘humane’ housing for the marginalized, using eco-friendly materials.”

She embraced an old method brought back by environmental experts known as “rammed earth construction,”, utilizing local Eco-friendly materials such as gravel, mud, sand and a small quantity of cement. It’s this method that Hand Over uses to build houses and community buildings such as schools and hospitals in ancient and traditional Egyptian architectural styles, such as mud brick Nubian vault houses.

Not only is this technique safer than modern construction methods, it’s 25 percent cheaper. It also reduces heat and dampness within a building so that residents consume less energy, reducing CO2 emissions by as much as 30 percent while benefiting from a healthier environment all year round.

Hand Over’s team started working in the Ezbet Abu Qarn slum, identifying the most disadvantaged families and the houses in greatest need of rebuilding.

“Many people refused because they were afraid,” Rostom says. “They weren’t keen because the houses looked simple and unusual.”

But one family accepted, and their house became the company’s first project.

Ahmed Abdul Raada, the owner, said “You couldn’t live in my house – each winter, snakes and rain came inside. That’s why I agreed to the project immediately. They took a year to build it, and meanwhile, they rented an apartment nearby for my three children and me.”

Three years later, he says his house is still sound. “If you touch the walls you’ll feel they’re cold, despite the fact that it’s 40°C outside.”

The company’s second project was a multi-specialist clinic in the remote village of Wadi Gharba in South Sinai, in collaboration with an NGO called “Catherine Exists”. A group of young doctors offered to work and live in the village alongside volunteer builders who regularly collaborate with Hand Over’s projects. Rostom also lived in the area for more than four months until the project was complete. 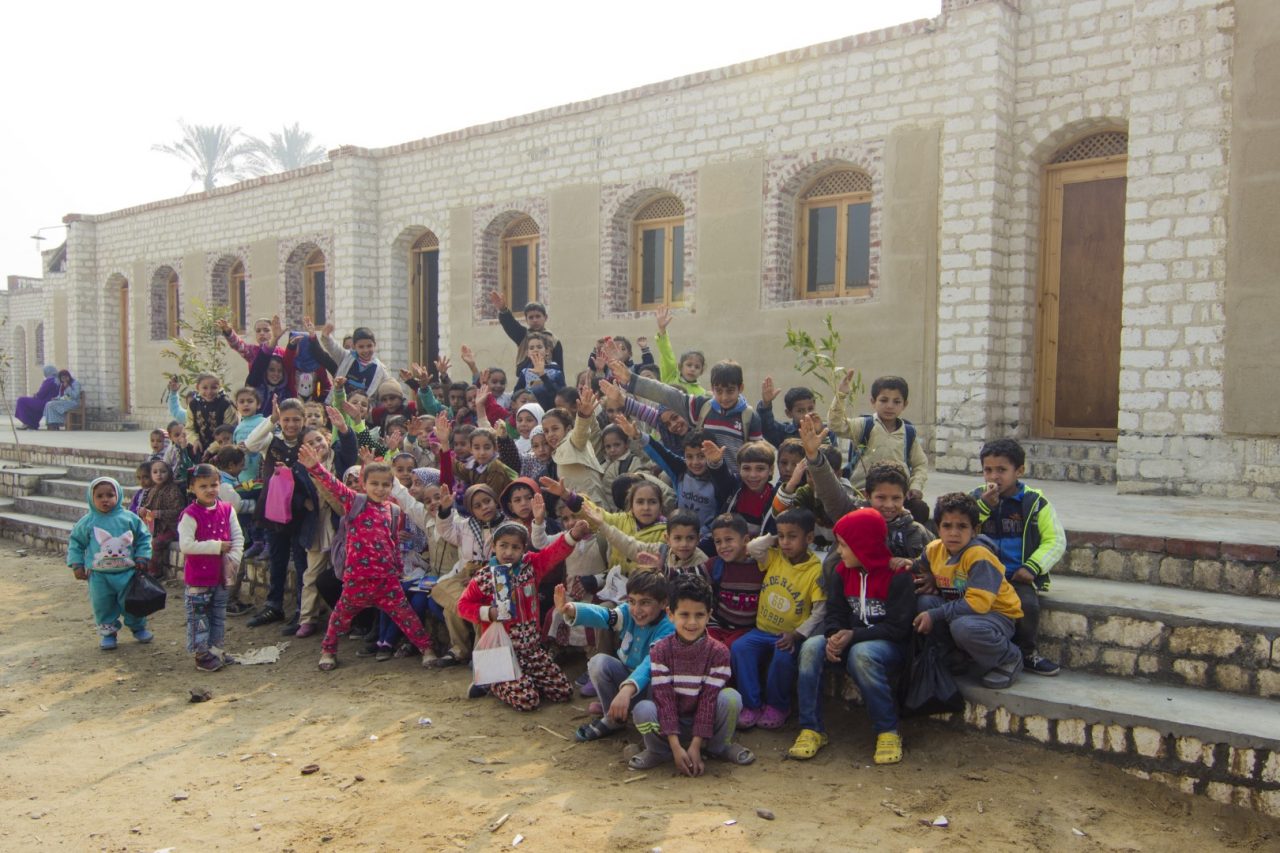 Hand Over often collaborates with NGOs and local volunteers for community construction projects. This was the case for the company’s third project – a school for 300 pupils in Abu Ghadan, a village 80 km from Cairo, built last year in partnership with the social charity Man Ahyaha.

From the beginning, Hand Over has trained architecture and civil engineering students to work as volunteers with local communities on the design and execution of new buildings using the earth construction method. According to Hand Over’s estimate, more than 1,000 people —between students and folks in need of affordable housing— have benefited from these projects.

Architect Abdullah Mekkawi started working at Hand Over after participating in one of the company’s workshops. Now he supervises the firm’s construction projects. “For me, it’s more than just earning a salary – I am both giving and gaining something,” he says.

Explaining their methods, Mekkawi says “We build houses using a method that reduces the need for air conditioning, fans or heaters in summer or winter, thereby reducing electricity consumption. For example, a school’s walls would normally be 12 centimeters thick; we make them 40 centimeters.”

Hand Over is now working on its fourth project, to build services and administrative buildings in Abu Galum Protectorate in Dahab, South Sinai.

“We have finished the design and we’ll start construction in collaboration with the Ministry for the Environment and the UNDP,“ Rostom said. “They understand the concept because we’re building with eco-friendly materials in a nature reserve. The buildings will provide services for visitors, as well as places for protection of the coral reef and administrative offices for workers in the area.”

This article is being published as part of 7.7 Billion, an international and collaborative initiative gathering 15 news media outlets from around the world to focus on solutions for social, economic and civic inclusion.