An Egyptian-Italian archeological mission excavating at the Aga Khan Mausoleum on Aswan’s west bank have unearthed a rock-cut tomb of someone called “Tjt”, dating back to the Greco-Roman era according to an official statement by the Ministry of antiquities.

Mostafa Waziri, General Secretary of the Supreme Council of Antiquities, explained that the mission discovered fragmented parts of two coffins; one painted while the other features hieroglyphic texts and bears the name of its owner.

The texts also display prayers for the gods of the First Cataract Khnum, Satet and Anuket as well as the Nile god Hapi. The statement reads that that the tomb consists of a stair leading to a side chamber housing a sculpted coffin in the stone blocks, according to the head of the ancient Egyptian sector Ayman Ashmawy.

The mission also found several mummies in poor condition and three niches sculptured in the wall, in another front chamber.

Patrizia Piacentini, head of the mission stated in the press release that they also found numerous treasures from the Greco-Roman Period including a considerable collection of cartonnage, such as one of the tomb’s owner’s feet wearing a gold sandal while another is painted white.

Another cartonnage is topped with a painting of the sun in addition to two gold painted funerary masks and two statues, among which one is in good condition preserving the Ba-bird, a being that represents the soul of the dead, with all its decorative details.

The mission found many amphorae as well as two vessels made of pottery containing embalming substances.

Piacentini added that the archeological mission has successfully mapped the whole site of 226 tombs from the burial site located in the area. 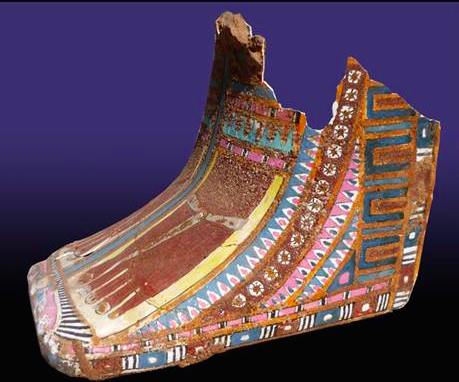 Photos’ credit: Official statement by the Ministry of Antiquities