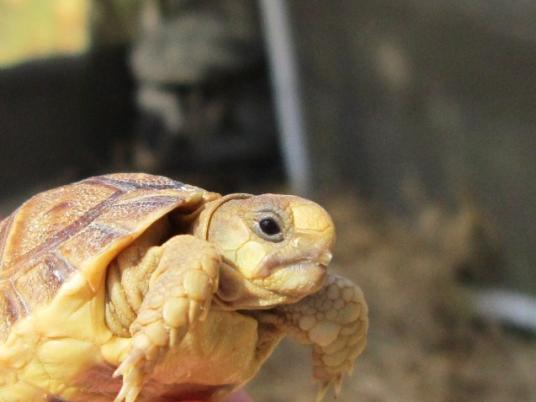 A mammoth problem facing the rather miniscule Egyptian tortoise, muses one veteran conservationist, is that it is obscenely cute. One of the world's smallest and most endangered species of tortoises, its numbers have been whittled down by the insatiable global demand for the tiny-shelled reptiles as exotic pets.

About the size of a one-pound coin at birth, and seldom exceeding 10cm in length at maturity, customs officers have found these diminutive desert creatures hidden in smugglers’ suitcases, stuffed inside toilet paper rolls, and clumsily disguised as sacks of potatoes. Thousands of Egyptian tortoises are captured and smuggled each year to light up the faces of adoring boys and girls ― and adults who should know better. It's hardly surprising, then, that so few are left.

“There are far more Egyptian tortoises in captivity than there are left in the wild,” says Omar Attum, a biology professor at Indiana University Southeast who is working to conserve the species. “Collection for the pet trade has greatly reduced the tortoise’s numbers, but unfortunately that’s not the only threat they face.”

The Egyptian tortoise (Testudo kleinmanni) historically inhabited the scrub desert and coastal dunes of North Africa in a swath running from Tripoli to Rafah, and up to 100km inland. But not anymore. An extensive field study carried out in 1994 revealed a sizable population in Libya's Jebel Akhdar region, but failed to locate even a single wild tortoise anywhere in Egypt, its historic heartland.

"I didn't find any tortoises in Egypt and at the time it seemed there were none left," says environmental consultant Sherif Baha Eddin, the ecologist who led the survey. “The species was presumed to be extinct here.”

But in 2000 a Bedouin came across a lone Egyptian tortoise traversing the undulating dunes of northern Sinai. Since then, several dozen wild individual tortoises have been spotted in the region and biologists now estimate that at least a hundred still exist in Egypt. But it is a tenuous existence at best, as the slow-maturing, long-lived species produces few offspring and its wild population could be wiped out in a single natural or manmade event.

"This species of tortoise is extremely sensitive to changes in its ecology," explains Baha Eddin. "Even slight variations in temperature, vegetation and ground cover can seriously affect it."

Human activities, particularly agriculture and the expansion of tourism, have stripped Egypt’s Mediterranean coast of its most suitable tortoise habitats. There is increasing competition with herders for the sparse vegetation on the land that remains.

“The tortoises need open areas with a diversity of plants to eat, and bushes that provide shade from the summer heat,” says Baha Eddin. “Without that, they die.”

Man has also inadvertently introduced new predators. Farmers' dogs mistake the tiny tortoises for chew toys, rats gobble down the babies and gnaw off the forelimbs of the adults. And the construction of buildings and telephone poles in otherwise treeless areas has provided nesting opportunities for ravens, which find the hatchlings a tantalizing delicacy.

The Egyptian tortoise’s mottled brown and yellow shell provides a degree of camouflage from predators, but poachers filling pet store orders for cute, exotic critters are continuously scouring the desert and peering under shrubs as if on Easter egg hunts.

“The Egyptian tortoise has three strikes against it,” declares Attum. “They’re small, so everybody can keep them; they’re cute, so everyone wants them; and they’re relatively inexpensive ― even for an endangered species ― so most people can afford to buy them.”

International legal protection has done little to dampen their appeal. The Egyptian tortoise is recognized as “critically endangered” on the International Union for Conservation of Nature (IUCN) Red List of Threatened Animals, and is protected under the Convention on International Trade in Endangered Species of Wild Fauna and Flora (CITES), which prohibits any international trade of the animal except for scientific purposes.

Libya, where 99 percent of smuggled reptiles originate, does not include the Egyptian tortoise on its outdated list of nationally protected species. Egypt is only marginally better. A widely-ignored ministerial decree signed in 1990 prohibits the collection or killing of the animals in the wild, and outlaws their possession and sale except ― oddly enough ― for "touristic purposes." Environment Law 4/1994 and its amendments outline broad measures to protect endangered species, including tortoises. Egypt is also a signatory of CITES, though its mandate is haphazardly enforced.

Since the late 1990s, customs seizures and periodic raids of illegal pet markets in Cairo and Alexandria have turned up thousands of Egyptian tortoises smuggled in from Libya, where local herders and migrant Egyptian laborers catch and sell them for about LE5 apiece to supplement their meager incomes. The tortoises retail for LE20–40 in Cairo pet markets, or are exported to the US, Europe and Asia, where they can fetch the equivalent of LE4000 apiece.

The exponential value has fueled a small but vibrant smuggling ring believed to be controlled by a handful of exotic animal traders. Some operate using front companies and private mailing lists; others brazenly advertise on the internet.

“Egypt is a major conduit for smugglers,” says Attum. “Operators in Cairo are very organized and have a network of local people in Libyan towns who collect the tortoises and arrange to ship them to Cairo. Egyptian authorities almost certainly know who they are.”

The Arab Spring brought smuggling operations to a halt, leading to temporary dry spell in worldwide pet markets. But with the Libyan conflict now settling down, and the country’s economy in shambles, there could be intense pressure to resume collection. There is also fear that poachers could target the Zaranik Protectorate in North Sinai, which holds Egypt’s last viable wild population.

While captive breeding programs exist, efforts to reintroduce Egyptian tortoises to the wild have stumbled. An early project aimed to release hundreds of liberated pet tortoises into the wilds of Zaranik, but fell through after scientists discovered a native population there and feared crossbreeding would weaken its genetic substrate. A similar attempt to release captive tortoises in the Omayed Protectorate, 80km west of Alexandria, fizzled after the tortoises began turning up dead.

“Wildlife reintroduction generally fails,” says Attum. “The reason is, when you let an animal go into a new habitat it tends to quickly get lost. Instead of breeding with other individuals, which they can’t find, the animal spends a lot of time moving around [the unfamiliar terrain] looking for food and refuge. The excessive movement results in higher mortality.”

The focus of conservation efforts, he stresses, must be on protecting the Egyptian tortoise’s dwindling wild population from habitat loss and poaching. This requires enforcing protective legislation, preserving favorable habitats and involving the local community.

In the Zaranik Protectorate, for instance, a community-based initiative employs local Bedouin to collect data on the diets, movement and breeding activity of the 70–100 wild Egyptian tortoises in the reserve. The approach encourages the local community to support conservation by “providing a more sustainable form of income than collecting the animals for the pet trade,” Attum explains.

In this way, potential poachers become the tortoise's protectors.