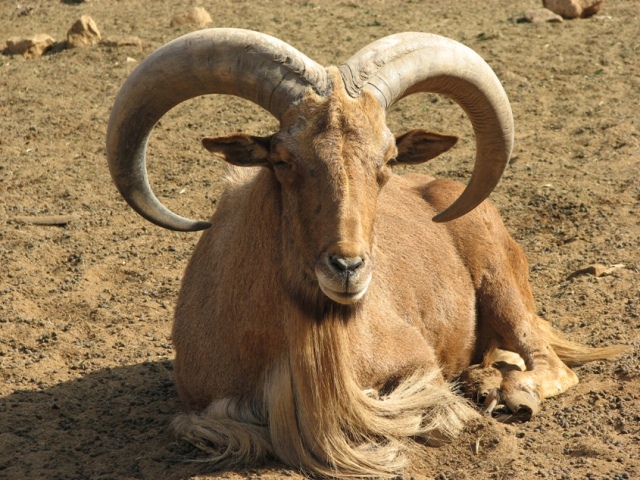 Just 10 years ago, the Barbary sheep was widely believed to be extinct in Egypt, and although scientists have proved that the sheep still exists here outside of the Giza Zoo, its small population remains threatened.

The animal once resided across North Africa’s mountainous areas, but the indigenous population is now confined to small, mostly isolated pockets. The sheep used to cover nearly all of Egypt except Sinai, but since the mid-1900s their habitat has been confined mainly to the southwest near the Libyan border and the southeast near the Sudanese border.

Barbary sheep, which have large curved horns and are sandy or reddish brown colored, have also been introduced to Spain, Mexico and the southwestern United States but are still classified as vulnerable by the International Union for Conservation of Nature.

Leading conservationist and environmental consultant Sherif Baha el-Din estimates only a few hundred remain in the wild in Egypt. Between 1997 and 2000, he and several other scientists visited remote areas of the Western and Eastern deserts and in 2002 published a report proving that the sheep still existed in a country where they were thought to be extinct.

“In 2007 I went to the same place [near the Libyan border] and found them, but in smaller numbers and this year they were also found,” Baha el-Din says.

However, Baha el-Din, who has never been fortunate enough to see the sheep in the wild, says he spotted at least 10 tracks during the 1997 trip and only one when he went back to the Western Desert in 2007.

Their greatest threat is hunting and poaching – from locals, Libyans who cross the border, and Egyptian soldiers in the area, Baha el-Din says.

Aside from hunters and poachers, years with low rainfall can also harm the population as the vegetation the sheep rely on for food becomes even sparser, according to wildlife biologist Francesco Germi.

Although the Gilf Kebir plateau in the Western Desert was recently declared a national park, hunting bans are rarely, if ever, enforced, according to the scientists.

The sheep, also known as the aoudad, can survive for long periods without fresh water and negotiate rocky terrain that is difficult for humans.

“They do live in very very remote areas, especially the ones in the Western Desert. They’re difficult places to visit with permits and logistics like water,” Baha el-Din says. “They’re very far from anywhere and that’s why they do exist there because it’s difficult for people to get there.”

Over the past two years, Germi has trekked through Gilf Kebir and the Uweinat mountain range at its southern end to search for and study Barbary sheep.

“We found a surprising presence in the area, it’s very difficult to estimate numbers … the only thing I can say is anywhere there is a suitable habitat with vegetation there are Barbary sheep around,” said Germi, who has been working on the project independently while applying for support from Egypt and international funding.

“It’s mostly a matter of focusing the search, which is something nobody had done before. All the previous expeditions had been with the aim of surveying the general area; we were going there only to locate Barbary sheep and going at the right time of day and the right place.”

However, despite seeing a number of sheep and finding their tracks and droppings, Germi says he also saw plenty of evidence of hunting.

Neither Germi nor Baha el-Din was aware of any local conservation programs specifically targeted toward the sheep.

“The new national park has no patrol of rangers and of course the region is so big and remote that it’s difficult to enforce patrolling. It’s very difficult to protect the animals in the wild,” Germi says.

American Harv Hollek, whose high-end travel company Quinn Rafferty & Co organizes hunting trips to exotic locales, would like to establish a joint conservation and hunting program for the sheep.

His website lists a $27,500, 13-day hunting trip for Barbary sheep and Nubian ibex in Egypt as coming soon. But the 80-year-old former Marine says he has put the proposal on hold since the revolution.

Hollek, who lives in Florida, declined to say what local organizations or government officials he may have consulted in Egypt, but plans to make a trip here when things settle down to see if his contacts are still interested.

“We’d start with a business proposal about how the sheep population could be made sustainable,” he says, adding that the plan would likely involve building housing and hiring Bedouins and biologists to help capture and breed the sheep in some sort of reserve.

“The Barbary sheep isn’t a very healthy herd and I would guess the government doesn’t have enough money to really make it work,” says Hollek, who believes a revenue-generating tourism-hunting market would provide incentive for the government to protect the animal.

This marks the first time Hollek has attempted to organize a trip to Egypt, but Kyrgyzstan, Vietnam and Azerbaijan are among the locations his company offers.

“I’ve been in this business for 25 years and have done everything from rehabilitation, to new breeding,” he says of conservation programs he’s worked on in other countries.

“The one thing that most governments cannot stop is poaching, which produces food for very hungry people who deserve to eat,” he wrote in a follow-up email. “When you have a managed program where in this case it's sheep, the sheep has a value besides becoming a meal. A managed program produces work for the same people who would poach.”

Germi says such a program could work in theory, but he’s skeptical.

“This has been done in other countries in Africa, but here we are talking of countries where wildlife management is at a very advanced stage. This is not the case of Egypt,” he says. “Moreover, at Giza Zoo there are already more than 100 animals in captivity, so there will be absolutely no need of removing other animals from the wild.”