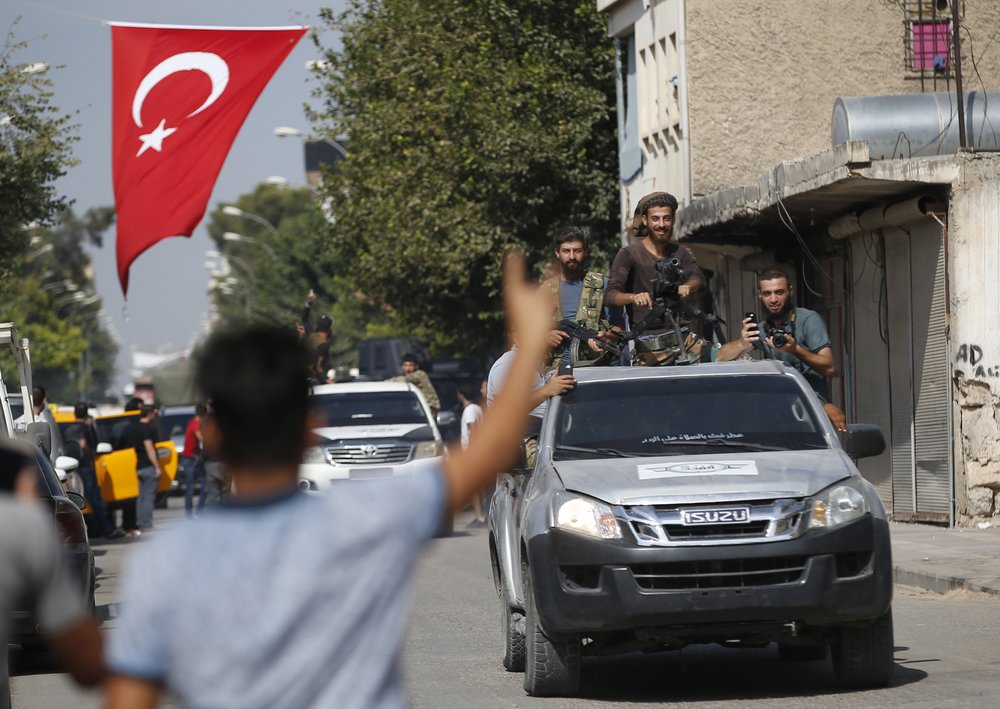 BEIRUT (AP) — The Latest on Turkey’s invasion of northern Syria (all times local):

The European Union has unanimously condemned Turkey’s military move into northern Syria and asked all member states to stop selling arms to Ankara.

Spanish Foreign Minister Josep Borrell said in an interview with The Associated Press that the 28 member states “have unanimously decided to condemn — that is the verb, not concern, not worry — but to condemn in strong terms what in the end is a military attack.”

Borrell said the EU called on Turkey “to stop immediately these military actions.” He said that at the meeting of EU foreign ministers, the member states “call also (on) all member states to stop selling any kind of arms” to Turkey.

Despite the criticism from its NATO allies, Turkey showed little sign of relenting its military offensive against Kurdish groups in northern Syria, in its sixth day.

A French diplomatic official says his country has no choice but to pull out its troops from Syria, following the U.S. decision to withdraw amid the Turkish offensive in the border area.

The official stressed Monday that France only has a small number of troops on the ground that cannot stay in the current conditions.

The official, speaking anonymously, was not allowed to disclose publicly the sensitive information.

French President Emmanuel Macron said overnight that “security measures” were to be put in place in the coming hours for French military and civilian personnel in the zone. Some French aid workers are also present in the region.

France has deployed an estimated few hundred special forces in the battle against the Islamic State group in Syria, but its military never comments on its special forces. The country has also contributed to coalition airstrikes, mostly through reconnaissance.

Hulusi Akar said Monday the prison was the only one holding IS militants located in the border strip east of the Euphrates River targeted in Turkey’s military offensive.

Hundreds of Islamic State families and supporters escaped from a holding camp in Syria amid the fighting between Turkish forces and the Kurds. It was not immediately clear if Akar was referring to that camp.

Turkey’s cross-border incursion, now into its sixth day, has raised the specter of an IS resurgence.

Turkey says it is determined to fight the IS group in addition to the Syrian Kurdish forces that it considers a threat because of their links to outlawed Kurdish rebels in Turkey.

The Kremlin says Russia and Turkey have been in close contact about the Turkish offensive in northern Syria.

Moscow has taken a careful stance on the Turkish operation, emphasizing the need to respect Syria’s territorial integrity but also noting Turkey’s right to secure its border.

Asked if there is a danger of a clash between Russian and Turkish forces in Syria, Peskov said “we don’t want to even think about that,” adding that there is a link between the two militaries to prevent any incidents. He wouldn’t comment on the Syrian army’s move north against Turkish forces.

Turkish President Recep Tayyip Erdogan has criticized NATO allies which are looking to broaden an arms embargo against Turkey over its push into northern Syria.

Speaking in Istanbul on Monday, Erdogan said he had spoken to Germany’s Angela Merkel and Britain’s Boris Johnson, adding that both leaders did not “know the truths” about Turkey’s operation and were under a “serious disinformation pressure.”

Erdogan said: “We are a NATO ally. Please note that these countries are all NATO countries.”

He added that Turkey was threatened by “terror” organizations in Syria, referring to Kurdish groups that Ankara considered a threat for links to a long-running insurgency within its own borders.

Syria’s Kurds were key allies in the U.S.-led coalition’s fight against the Islamic State group.

The president of Ireland is urging Turkey to stop its offensive in northern Syria in favor of pursing diplomacy.

Michael Higgins expressed his “deep concern” over Turkey’s unilateral intervention in Syria amid concerns over the possibility of a humanitarian disaster.

He says the possibility of a forced return of Syrian refugees in northern Syria is “appalling” and “unacceptable.”

The Irish president says any attempt at demographic change in that part of the country “must appall the international community.”

The Irish president’s appeal comes as Syrian government forces are reportedly moving against Turkish forces in the north of the county following an agreement with besieged Kurdish forces.

Syria’s state news agency says government forces have entered the northern town of Tabqa, as they move north against Turkish forces in the country.

SANA said Monday that in addition to Tabqa and its air base that carries the same name, Syrian troops entered several other villages on the southern parts of Raqqa province.

Tabqa was previously a stronghold of the Islamic State group, and is on the road to the city of Raqqa, which was IS’ de facto capital, until it lost both in 2017.

The move toward Tabqa and nearby villages came a day after Syria’s Kurds said Syrian government forces agreed to help them fend off Turkey’s invasion — a major shift in alliances as U.S. troops withdraw from the northern border area.

Turkish President Recep Tayyip Erdogan has signaled that Turkish troops and their Syrian opposition allies are ready to launch an assault on the Syrian-Kurdish held city of Manbij.

Erdogan told reporters on Monday: “We are about to implement our decision on Manbij.”

He added that Turkey’s aim would be to return the city to Arab populations whom he said where its rightful owners.

Earlier, Turkish television reports said Turkey’s forces were preparing for an operation on Manbij and were positioned at the city’s edge.

Syria’s Kurds have struck a deal with Syrian government forces to fend off the Turkish invasion, as their former ally, the U.S. has ordered a withdrawal from the northern border zone.

European Union leaders are looking to broaden an arms embargo against NATO ally Turkey to protest its offensive against Kurdish forces in neighboring Syria.

Blok was speaking at the EU foreign ministers meeting in Luxembourg.

Germany, France and the Netherlands have already suspended arms sales to Turkey.

French Foreign Minister Jean-Yves Le Drian said that he also wanted a “a strong position on the export of arms to Turkey.”

But Le Drian also called on the United States “above all” to call for a meeting of the international coalition against the Islamic State group, over alarm that the chaos caused by the Turkish offensive was reviving the threat of IS.

Syria’s Kurds were key allies in a U.S.-led coalition against the Islamic State group.

SANA said Monday morning that the Syrian army moved into the area to “confront the Turkish aggression,” without giving further details.

The report says residents of Tal Tamr that is about 20 kilometers (12 miles) from the Turkish border welcomed the troops.

It did not say from which area the Syrian army marched toward the town.

The move toward Tal Tamr came a day after Syria’s Kurds said Syrian government forces agreed to help them fend off Turkey’s invasion — a major shift in alliances that came after President Donald Trump ordered all U.S. troops withdrawn from the northern border area amid the rapidly deepening chaos.

As options narrow on Syria, Trump prepares to drop sanctions hammer on Turkey