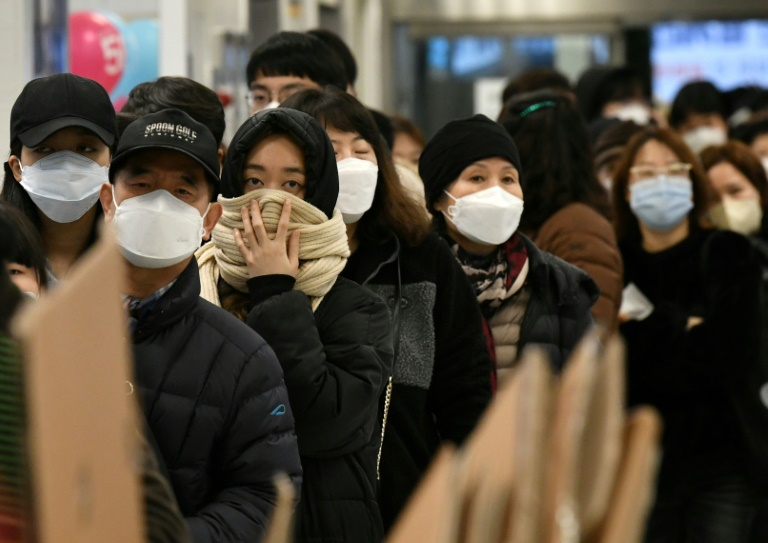 European stock markets fell further on Tuesday but declines in midday trading were far less than during a major sell-off a day earlier.

More deaths and a surge in new coronavirus cases in Iran, Italy, Japan and South Korea has fanned fears of a pandemic.

Other Asian equity markets recovered a bit meanwhile, with increases in Hong Kong and Seoul.

After rebounding early on Tuesday, major European markets then headed lower once again, although with much less momentum compared with their losses of between 3.0 and 4.0 percent the day before.

“Equity markets in Europe enjoyed a rebound in early trading in the wake of yesterday’s bloodbath of a session, but the positive move was short-lived,” said CMC Markets UK analyst David Madden.

“The brutal losses endured yesterday coaxed a few buyers out of the woodwork, but given that equity benchmarks are back in the red suggests that sentiment is still sour.

“The coronavirus crisis in Italy remains at the forefront of traders’ minds,” Madden added.

Italy has seen a serious jump in cases — from six to 229 since Friday — and now has the biggest number of confirmed infections in Europe.

The rapid spread abroad came as the World Health Organization said the epidemic had peaked at its epicenter in China, where it has killed more than 2,600 people and infected more than 77,000 others.

But the situation has worsened elsewhere with nearly 2,700 other cases and more than 40 deaths globally, prompting restrictions on travellers from infected nations, the cancellation of football matches and national efforts to isolate suspected carriers.

“What was largely a Chinese issue to resolve has soon become an international problem, with European eyes transfixed on Italian efforts to curb the spread of the virus,” IG analyst Joshua Mahony said.

“Fears over a potential coronavirus contagion throughout Europe is likely to provide substantial risk-off sentiment for days and weeks to come, with significant pressure on the Italians to stop this outbreak from spreading throughout the continent.”

Italian Prime Minister Giuseppe Conte blamed the management of a hospital in northern Italy for an outbreak there.

Oil prices, which tanked by around 3.8 percent on Monday, remained in negative territory owing to concerns that the global economy would require less crude in the days and weeks to come.

Image: AFP / Jung Yeon-je While the World Health Organization said the outbreak had ‘peaked’ in China, it warned about a possible pandemic

WHO warns of pandemic risk after virus peaks in China