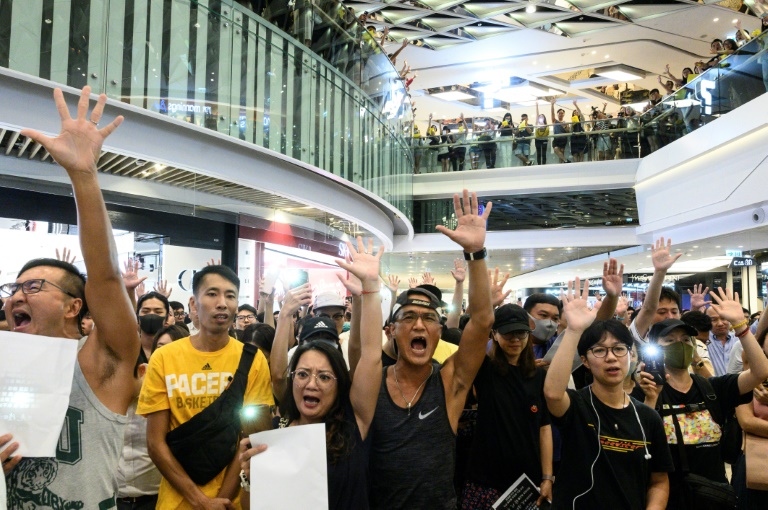 One of Hong Kong’s most prestigious sporting tournaments on Friday became the latest victim of the huge protests convulsing the city as a growing roster of events and entertainment acts pull out of the financial hub.

Organisers of the WTA Hong Kong Open women’s tennis tournament said they were postponing next month’s competition because of the “present situation” after months of sometimes violent pro-democracy protests.

“After extensive discussions with our key stakeholders, we conclude that a smooth running of the tournament can be better assured at a later time,” the Hong Kong Tennis Association said in a statement.

Hong Kong’s protests were triggered by alarm over a controversial bill, since scrapped, to allow extraditions to mainland China.

Millions of people have taken part in demonstrations over the last three months which have morphed into calls for democracy and complaints against the erosion of freedoms under Beijing’s rule.

Street battles between riot police and small groups of hardcore protesters have become a weekly occurrence, hammering the already struggling economy and undermining the city’s reputation for stability.

In recent weeks, a growing number of stars have cancelled or postponed events, from prominent K-Pop acts such as Daniel Kang and GOT7 to the popular US-based comedian Trevor Noah.

A large global wellness summit also moved its location to Singapore because of the unrest.

On Thursday, producers behind the award-winning musical Matilda — based on the children’s novel by Roald Dahl — announced they were scrapping a planned month-long run in the city that was supposed to kick off next week.

The theatre where the production was meant to take place is near the city’s police headquarters which has become a frequent flashpoint between protesters and the authorities.

“Sadly the 14 weeks of civil unrest in Hong Kong have decimated ticket sales, and more importantly we cannot guarantee the safety and wellbeing of our international company, which comprises a large number of young children,” said James Cundall, the CEO of Lunchbox Theatrical Productions, which was bringing the show to Hong Kong.

The International Tennis Federation told AFP that a Davis Cup tie between Hong Kong and Taiwan planned for this weekend would still go ahead.

The cancellations are compounding misery for the city’s tourism sector which has been battered by the protests.

On-year tourist arrivals fell by 40 percent in August, the city’s financial secretary Paul Chan revealed this month, with hotel occupancy rates down by around half, causing knock-on impacts on the retail and dining sectors.

Earlier this week Hong Kong-based airline Cathay Pacific reported an 11 percent yearly drop in passengers for August, during which two occupations of the airport caused hundreds of flight cancellations.

The city’s economy was already struggling through weak global demand and the year-long trade war between Washington and Beijing.

Seasonally adjusted economic growth dropped by 0.4 percent in the second quarter, most of which fell before the pro-democracy rallies began.

The protest movement — which is leaderless and largely organises online — has said inflicting economic damage is the only way to pressure the city’s leaders after years of peaceful rallies failed to win concessions from Beijing.

Despite the economic hardship, the movement is still able to muster huge crowds, although not at the same scale seen earlier on.

Under a deal signed with Britain ahead of the city’s 1997 handover to China, Hong Kong is allowed to keep its unique freedoms for 50 years.

But democracy activists accuse Beijing of reneging on those promises by ramping up political control over the semi-autonomous territory.

After weeks of taking a hard line, city leader Carrie Lam made the surprise move last week to fully scrap the loathed extradition law — but the gesture was dismissed by protesters as too little, too late.

Activists and analysts say the movement will only end when some of the other key demands are met such as an inquiry into the police, an amnesty for the nearly 1,400 people arrested and universal suffrage.

Hong Kong leader tells US not to 'interfere' after fresh protests