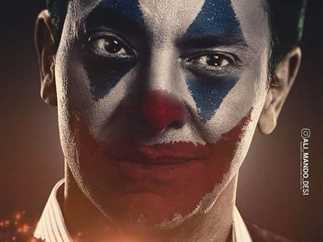 Fathy Abdel Wahab said that his role in the “Joker Masr” movie would be significantly different from that of the main character in the American movie Joker, currently screening in the United States and around the world, reports a source close to actor.

The idea of ​​the film came about when a Twitter user tweeted to ask about the best Egyptian actor to play the role of Joker, the source explained. Most responders selected Abdel Wahab, after which the actor received two offers from two production companies for the role.

This was not the first time that the public has asked Abdel Wahab to play a role similar to that of the Joker, said the source. The actor came to be known for such roles after his success playing the similar role of a character named Samir Spot in “Bahebak W Ana Kaman” (I Love You, I Love You Too; 2003.

For the second week in a row, “Joker” (2019 directed by Todd Phillips) has maintained its lead in US and international box offices, including in Egypt.

Audiences in Egypt, primarily young people, stood for hours to book tickets for the movie, an unprecedented phenomenon for an American movie in the North African country.

The film grossed more than half a billion dollars after 12 days of screening, with total revenues standing at US$543.9 million.