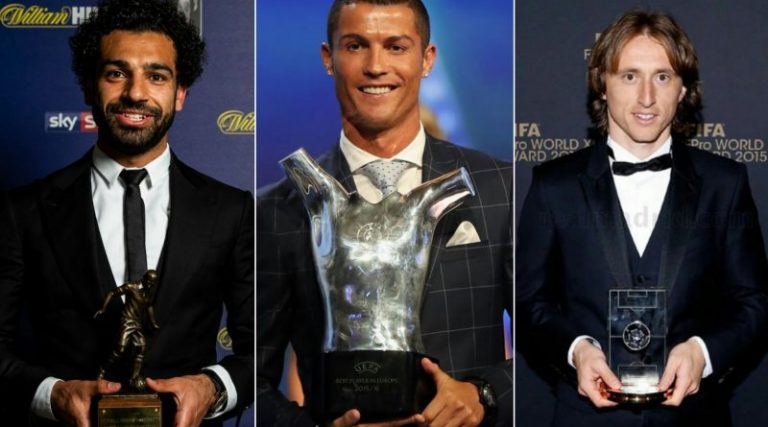 The stars of the ceremony will be received on the green carpet at 6 PM London time, and 7 PM Cairo time, FIFA announced through its official Twitter account.

Celebrations will commence at 7:30 London time, and 8:30 Cairo time.

Finally, the winner will be announced at 9:00 pm London time, and 10 pm Cairo time.

The ON Sport channel will broadcast the ceremony live.

This year, Salah became first Arab ever to compete for the FIFA Men’s Player Award.

To many, his nomination comes as no surprise; the Liverpool forward emerged as the top scorer of the Premier League and has swept almost every major award, from the prestigious Golden Boot to BBC’s African Player of the Year (2017).

In this year’s FIFA World Cup, Salah became a national treasure after single-handedly leading Egypt to the cup finals, for its first time since 1990.

Meanwhile, Ronaldo comes in with two consecutive “FIFA Men’s Player” awards already under his sleeve, from 2016 and 2017.

Moreover, the 33-year-old boasts an incredible season, having won 2018 Champion’s league in May before moving from Real Madrid to Juventus.

Luka Modric was crowned the Champion’s League winner, and was indispensable to World Cup runner-up Croatia.

The midfielder also recently won the “UEFA Player of the Year” award ahead of Salah and Ronaldo, in addition to swooping the World Cup’s 2018 “Golden Ball” award after a stellar performance, which helped bring Croatia to its unexpected World Cup final against France.

The top ten candidates for the FIFA Men’s Player Award were chosen by a panel of esteemed FIFA players and experts. The winner will be determined through a vote by team captains, coaches, esteemed journalists and fans.

Each group of voters will account for 25 percent of the vote.

EFA criticizes Sport Minister for ‘ignoring’ it in Salah discussion