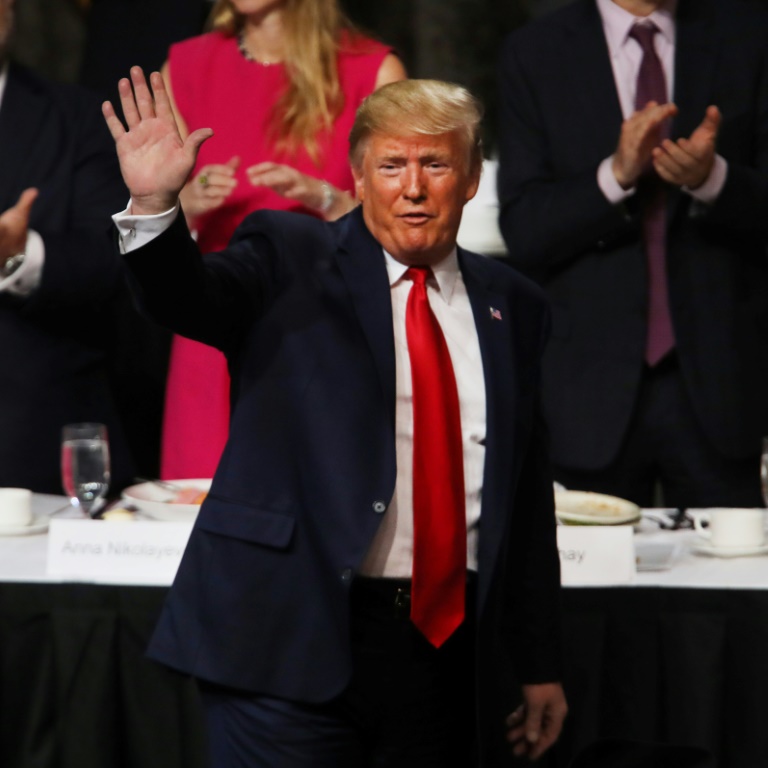 Donald Trump faces the most perilous challenge of his three-year presidency as public hearings convened as part of the impeachment probe against him open under the glare of television cameras on Wednesday.

Democrats in the House of Representatives plan to prove over several weeks of hearings that the US leader abused his office by seeking Ukraine’s help for his 2020 reelection campaign, and sought to extort his Kiev counterpart into finding dirt on Democratic rival Joe Biden.

Trump says the inquiry is “corrupt” and “illegal,” and maintains he did nothing wrong.

“Democrats in Washington would rather pursue outrageous hoaxes and delusional witch hunts, which are going absolutely nowhere. Don’t worry about it,” he said confidently Tuesday in a speech to the Economic Club of New York.

But the investigation threatens to make him only the third US president to be impeached, after Andrew Johnson in 1868 and Bill Clinton in 1998, and placed on trial in the Senate for possible removal from office.

“On the basis of what the witnesses have had to say so far, there are any number of potentially impeachable offenses: including bribery, including high crimes and misdemeanors,” House Intelligence Committee Chairman Adam Schiff, who will lead the hearings, told NPR radio Tuesday.

Neither Johnson or Clinton was convicted and removed. But in 1974 Richard Nixon resigned in the face of certain impeachment and removal from office for the Watergate scandal.

Hearings are expected to be fiery as a series of government officials take the stand to testify on Trump’s Ukraine machinations during the middle of this year.

Both sides have spent the past several days rehearsing for the showdown. Coming just one year before national elections, the hearings carry great risks for both parties and no certain reward, with the US electorate deeply divided and weary of Washington infighting.

But they also show that Trump’s sizable voter base, which delivered his shock victory in 2016, rejects the allegations. Trump has focused his personal defense on ensuring Republicans in Congress heed their views.

Republicans have accused the soft-spoken and prosecutorial Schiff of an unfair and unconstitutional process, and they have attacked witnesses as biased against the president.

They have also sought, in closed door depositions over the last six weeks, to refocus attention on Biden’s link, through his son, to Ukraine, and on the widely discredited theory Trump apparently believes that Ukraine assisted Democrats in the 2016 election.

But Schiff said in a letter Tuesday that he will not put up with attempts to hijack the hearings and turn them into a political circus.

The inquiry “will not serve as venues for any member to further the same sham investigations into the Bidens or into debunked conspiracies about 2016 US election interference,” he said.

Democrats have amassed evidence that Trump sought to leverage Ukraine President Volodymyr Zelensky’s desire for a meeting between the two leaders and for some $391 million in aid to get Ukraine to find dirt on Biden, who could face Trump in next year’s presidential election.

The key evidence is the official White House transcript of a July 25 phone call showing Trump pressuring Zelensky to open investigations into Biden and the 2016 conspiracy theory.

The White House has refused to hand over other records on Ukraine policy or allow top Trump aides involved in the decision to pressure Zelensky to testify.

On Tuesday Trump’s chief of staff Mick Mulvaney — who has publicly confirmed the broad outlines of Democrats’ allegations — rejected a subpoena to appear before the committee.

The first witnesses Wednesday will be William Taylor, the top US diplomat in Ukraine, and George Kent, Deputy Assistant Secretary of State for European and Eurasian Affairs

Both have already testified in private that Trump clearly used his power and aid to pressure Zelensky for investigations that would help him in the 2020 vote.

“I had concerns that there was an effort to initiate politically motivated prosecutions that were injurious to the rule of law, both in Ukraine and the US,” Kent told investigators.

On Friday, Marie Yovanovitch, the US ambassador to Ukraine whom Trump removed earlier this year, will testify.

Democrats on Tuesday unveiled the schedule for public testimony next week by eight more witnesses, all of whom previously testified behind closed doors.

House Republicans are preparing to argue that Trump was within his rights, given Ukraine’s history of deep corruption.

“Democrats want to impeach President Trump because unelected and anonymous bureaucrats disagreed with the President’s decisions,” they said in a strategy memorandum over the weekend.

“The federal bureaucracy works for the president…. and President Trump is doing what Americans elected him to do.”