The French government on Friday announced it would recall its envoys from the United States and Australia.

The move came after Australia on Thursday broke off a submarine deal worth at least $40 billion (€34 billion) with France to build diesel-electric submarines to instead buy nuclear-powered ones from the US.

What did France say?

In a written statement, Le Drian emphasized the French decision “is justified by the exceptional seriousness of the announcements.”

The French government has expressed anger at the US-Australia deal, which also includes the UK. Macron has not commented on the issue since US President Joe Biden made the announcement Wednesday.

The recalling of France’s ambassadors to the US and Australia, close allies is unprecedented.

How has Washington responded?

The White House said Friday that it regrets France’s decision, but that will work to resolve the major diplomatic spat.

In a statement, State Department spokesperson Ned Price called France “a vital partner and our oldest ally,” saying that high-level talks would likely take place during the UN General Assembly meeting next week.

While China was not mentioned in his announcement of the defense alliance, Biden did speak of “rapidly evolving threats” as a reason for the so-called AUKUS alliance of Australia, the UK and the US.

The French Embassy in Washington also called off a gala to celebrate bilateral ties at its ambassador’s house that had been scheduled for Friday. 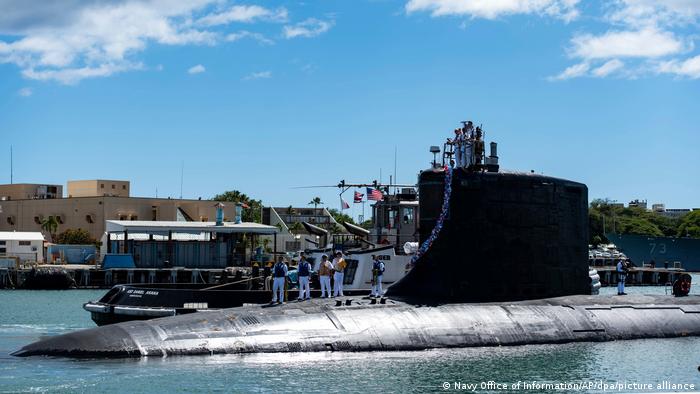 Under the new defense alliance, Australia will now acquire nuclear-powered US submarines

Why did Australia break off the deal?

Australia’s Foreign Ministry said Canberra regrets France’s move to recall its ambassador, but said it would continue to work with France on other issues.

Australian Prime Minister Scott Morrison acknowledged the damage to bilateral ties with France but insisted he told French President Emmanuel Macron of Australia’s plans in June over a lengthy dinner in Paris.

Morrison told an Australian radio station the choice was made in “the new strategic environment we’re faced with.”

France has pushed for years for a collective European political, economic and military strategy for the Pacific region. This week, the EU unveiled its plans for the Indo-Pacific.

What is a suspected Chinese spy balloon doing above the US?