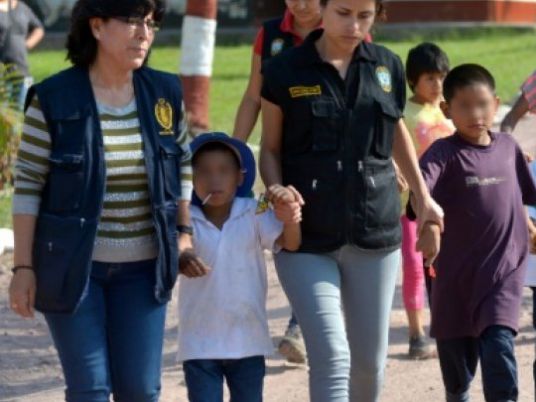 He doesn't know exactly how much time has passed since Shining Path guerrillas kidnapped him and put him to work on a slave-labor farm deep in the Peruvian jungle.
The recently rescued man, who cannot be named for security reasons, knows he was about 18 when the Maoist rebels abducted him from his rural village. He is over 40 now, with a son and daughter born in captivity who are still in the guerrillas' hands.
The Ashaninka indigenous man is one of 54 people, most of them children, rescued by the army last month from Shining Path labor camps in a densely forested corner of the Amazon known as VRAEM — the Valley of the Apurimac, Ene and Mantaro Rivers.
After being flown out by helicopter and placed under protection at a military base in the central town of Mazamari, they tell horror stories of stolen lives spent in slavery.
"I was there against my will. I lived in fear," the traumatized indigenous man said through a translator.
"Shining Path did a lot of harm, killed a lot of people. I wanted to escape, but I was afraid they would kill me," said the man, who was put to work farming crops to feed his fellow captives.
Others were forced to farm coca for cocaine production — now Shining Path's main activity — and to have children with guerrillas, who were then inducted into the rebels' ranks, according to officials.
Shining Path, whose war against the Peruvian government left 69,000 people dead in the 1980s and 90s, was mostly dismantled after the capture of its leader Abimael Guzman in 1992.
But its remnants remain active in coca-growing regions, a fact underlined by the dramatic rescue of the 54 captives.
The government estimates Shining Path today has some 350 members, including 80 armed fighters.
Officials say the rebels are still holding 60 to 80 more children.
"The children start out working in the coca fields. When they're 12 or 14 years old, they join Shining Path's operational forces," said Defense Minister Jakke Valakivi.
"It's incredible how the kids who were born and grew up in the camps can track a person in the jungle, figure out how long ago his footprints were left and smell someone from outside by his deodorant or his soap," one soldier who took part in the rescue operations told AFP.
'Pol Pot strategy'
Many of the hostages have no official identity, having been born in captivity. The adults often do not know how old they are.
One Ashaninka woman remembered she was eight years old when she was kidnapped. She calculated she must be over 30 today.
Another former captive who now helps the army find Shining Path labor camps recalled being kidnapped as a child with his family.
A guerrilla killed his father before his eyes and forced him to kill a friend. Then the rebel raped and impregnated his mother and sister.
The head of the commando unit that rescued the captives, General Cesar Astudillo, said the rebels use a "Pol Pot strategy" like the brutal Khmer Rouge regime in Cambodia in the 1970s.
"They divide up captured families and put them in different camps. Then they threaten to kill them if they escape," he said.
Locating the remaining captives is challenging in a remote region where the trees can grow up to 40 meters (130 feet) tall and the view from the sky is of a vast, unbroken carpet of green.
"In the jungle, it's very difficult to detect someone from above," said one soldier setting out for a helicopter patrol.