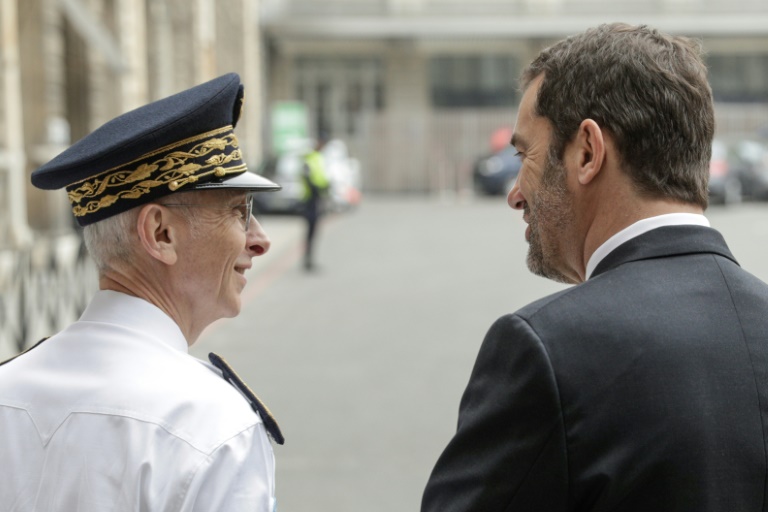 Thousands of police fanned out across central Paris and other French cities Saturday ahead of planned “yellow vest” protests, with the government vowing to prevent a repeat of the rioting and looting seen in the capital last week.

Authorities have banned demonstrations in a large area in the west of the city, including the Champs-Elysees, the scene of last week’s rampage by hundreds of black-clad agitators.

Dozens of police vehicles, including armored trucks and water cannons, encircled the Arc de Triomphe at the top of the iconic avenue, with officers searching people’s bags and patrolling in front of boarded-up storefronts.

At the opposite end of the avenue access was completely blocked to the Place de la Concorde, near the presidential palace and the National Assembly, and two drones were flying over the capital to help officers track any protesters’ movements.

Yellow vest organizers had called on social media for protests elsewhere in Paris, including the Trocadero square in front of the Eiffel Tower at the Place de la Republique, though both areas were calm early Saturday.

But banks and other businesses remained shut in several parts of the city, their windows protected with planks of wood, and some schools had cancelled Saturday classes in anticipation of further violence.

Protest bans were also in effect in the centres of Toulouse, Bordeaux, Dijon, Rennes and the southern city of Nice, where Chinese President Xi Jinping is to meet his French counterpart Emmanuel Macron this weekend.

Macron is under pressure to avoid a repeat of last week’s sacking of the Champs-Elysees, where over 100 shops were damaged, looted or set alight during seven hours of rioting by mainly masked, black-clad protesters.

The government has redeployed soldiers from its Sentinelle anti-terror force to guard public buildings on Saturday, freeing up the 6,000 deployed police in Paris to tackle any flare-ups of violence.

The move has drawn fierce criticism from opposition parties, who have accused the government of playing with fire.

In a YouTube post, truck driver Eric Drouet called on protesters not to try to return to the Champs-Elysees.

“It’s a very, very bad idea. You know what image they’re trying to create of us,” he said, predicting a “quiet Saturday”.

Macron’s government drew fierce criticism over its handling of last week’s protests, when police appeared to hang back during the wave of rioting and vandalism that swept the Champs-Elysees.

Analysts say the authorities may have been reluctant to engage the rioters after the dozens of injuries sustained by participants in previous protests.

But this week officials vowed “zero tolerance” for more violence.

“He needs to show the world that the government has a handle on the country and on the capital,” said Sylvian, the leader of a team of repair workers still clearing away debris on the avenue on Friday.

The Paris police chief was fired over his handling of the violence, which saw dozens of windows shattered by people hurling paving stones and wielding hammers and other makeshift weapons.

The protests began in rural France on November 17 over fuel tax increases and quickly ballooned into a full-scale anti-government rebellion that two months of public policy debates have failed to defuse.

In recent weeks, the protesters’ numbers have dwindled, falling from 282,000 nationwide on the first Saturday to just 32,000 last week, according to official estimates.

But those still on the streets appear more determined than ever to make their presence felt.

In a Facebook video this week, Maxime Nicolle one of the movement’s figureheads, explained the periodic rioting in Paris and other cities as the result of “40 years of being beaten psychologically and financially” by successive governments.

“It’s a bit as if a battered woman beats up her boyfriend and you say she’s the violent one,” he said.

The violence has cost the protesters much of the public support they enjoyed early in the movement, which seeks higher taxes on the rich and a greater say for ordinary people in the running of the country.

Some 53 percent of respondents said they either supported or felt a degree of sympathy towards the movement, down eight points in a week, according to a poll released Wednesday.