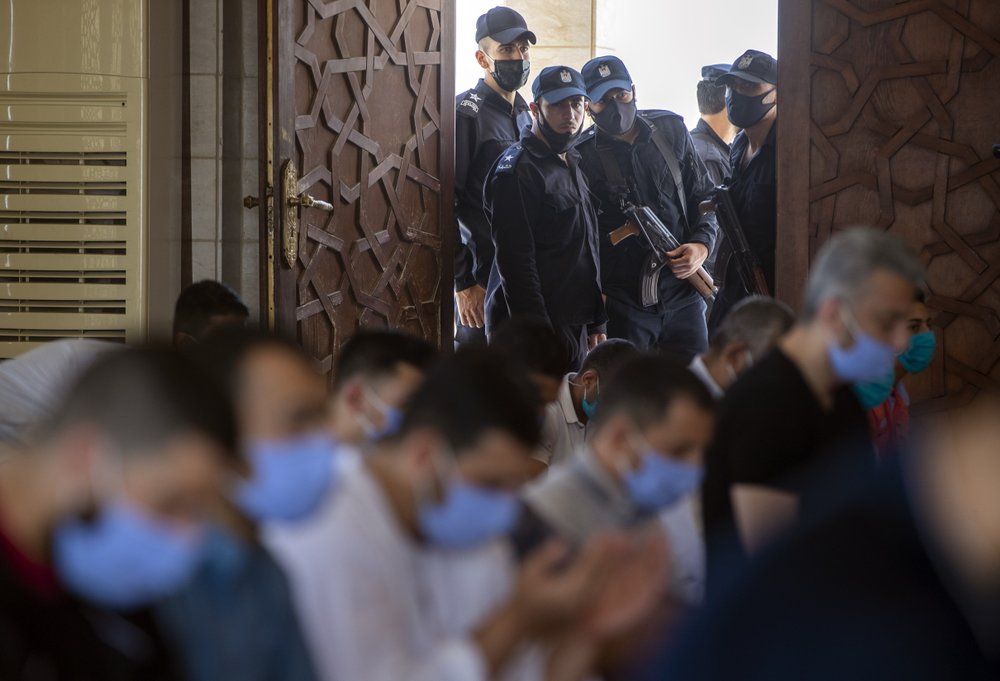 GAZA CITY, Gaza Strip (AP) — Gaza’s Hamas rulers allowed mosques to reopen for Friday prayers for the first time since March, despite a recent spike in new coronavirus cases within quarantine facilities in the isolated territory.

Worshippers were given hand sanitizer as they entered mosques. They brought their own prayer rugs, wore masks and kept space between themselves. The opening came ahead of Eid al-Fitr, a major holiday marking the end of the holy month of Ramadan.

Authorities in Gaza have reported 35 new cases in recent days, bringing the total number to 55. All the new cases were detected in quarantine facilities. But they have renewed concerns about a wider outbreak that could overwhelm the depleted health care system in the impoverished territory, which is home to two million people.

Israel and Egypt have imposed a blockade on Gaza since Hamas, an Islamic militant group, seized power from forces loyal to Palestinian President Mahmoud Abbas in 2007. Three wars between Israel and Hamas, as well as Palestinian infighting, have also taken a heavy toll on the health care system.

Gazans are only able to enter the territory through the Rafah crossing with Egypt and are immediately placed in mandatory quarantine for 21 days. Hamas said it would bar the entry of returnees until the end of June to allow health workers to deal with the new cases.

The virus causes mild to moderate symptoms in most people, who recover within a few weeks. But it is highly contagious and can cause severe illness or death, especially in older patients or those with underlying health problems.

In a separate development, the Palestinian Authority said it was not informed about a shipment of coronavirus aid sent by the United Arab Emirates to Israel earlier this week on the first known direct commercial flight between the two countries.

Palestinian Prime Minister Mohammed Shtayyeh said Thursday the Palestinian Authority, which governs parts of the Israeli-occupied West Bank, was not consulted about the aid shipment, which the UAE had said was bound for the Palestinian territories.

“We read about this in the newspapers,” he said. “We were not informed about this and there was no coordination with us on either end, with our ambassador in the Emirates or here.”

Palestinian Health Minister Mai al-Kailah said the authority cannot receive such assistance without prior coordination, “because what is important is that we have sovereignty here.”

The UAE said it delivered 14 tons of protective gear, medical items and ventilators to help curb the spread of the new virus in the Palestinian territories. Etihad Airways confirmed that it sent a cargo plane directly from Abu Dhabi to Israel ferrying humanitarian aid for the Palestinians.

The flight Tuesday came amid recent signs of warming ties between Israel and Arab countries that have long boycotted it over its occupation of land the Palestinians want for a future state. The UAE and Israel have no diplomatic relations but are widely believed to have forged back-channel security ties over their shared enmity toward Iran.

It was unclear where the aid went after it arrived at Ben Gurion International Airport. The Israeli military body in charge of civil affairs in the territories declined to comment.

The aid from the UAE will likely be sent to Gaza. The UAE hosts Mohammed Dahlan, a former senior Palestinian official and Abbas rival who has friendly relations with Hamas and has worked with it to provide aid to the territory, where he has a base of support.

The aid shipment could be further complicated by Abbas’ announcement earlier this week that he is ending security coordination with Israel over its plans to annex large parts of the West Bank in line with the Trump administration’s Middle East plan.

Annexation could also set back Israel’s efforts to cultivate closer ties with Arab countries. Saudi Arabia on Thursday affirmed its “rejection of the Israeli measures and plans to annex Palestinian lands in the West Bank” and reiterated its support for Palestinian aspirations.

Abbas said earlier this week that the Palestinians would no longer abide by agreements with Israel dating back to the Oslo accords in the early 1990s. Those agreements created the Palestinian Authority and underpin its political, economic and security relations with Israel. The Palestinians have made similar threats in the past, and it’s unclear whether they can follow through on them.

Senior Palestinian officials said commanders in the field have been instructed to cut all contacts with Israel. They said Palestinian forces have also withdrawn from areas near Jerusalem where Israel had granted them permission to operate in order to enforce measures to contain the virus outbreak. The officials spoke on condition of anonymity because they were not authorized to to talk to the media.

By FARES AKRAM and JOSEPH KRAUSS

Image: Palestinian Hamas police stand guard at the entrance of a mosque as worshipers attend the last Friday noon Prayer of the holy month of Ramadan, in Gaza City, Friday, May. 22, 2020. After nearly two months of closure due to the coronavirus, Gaza’s Hamas rulers decided to partially reopen mosques for the Friday noon prayer. (AP Photo/Khalil Hamra)