Egyptians know how to eat a mango. First, slice through the fruit horizontally and twist the halves apart. Next, twist the seed out with your teeth—a potentially dentally ruinous but effective practice—and scrape the flesh off, also with your teeth. The two remaining gouged halves are gingerly scraped clean with a teaspoon. Small mangoes are preferable, and they should be very ripe and soft.

But as easy as it is to find fruits and vegetables in Cairo, it is difficult to find vegetarians.

Alicia Rutherford, a native of Spain, has lived in Cairo for a year and half. A stalwart vegetarian and promoter of healthy living—her project, “Healthy Kitchen Egypt” supplies locals with a variety of prepared cleansing foods, and her Cairo Underground Supper Club is exclusively vegan—Rutherford considers Cairo a surprisingly easy place to be a vegetarian. Sticking to a meatless diet here is simpler than in Mexico, where she lived for some time and where staples like tacos are generally filled with meat or fish, albeit a bit more challenging than San Francisco, her home before Cairo. (Of course, that is like saying it’s harder to make a living selling umbrellas in Cairo than in London.)

The ease of finding vegetarian food has a lot to do with budget. Relative to vegetables, meat is expensive, and many of the local staples—ful, tamaya, koshari—are inexpensive, vegetarian fare. But adhering to a meatless diet by default does not make you a vegetarian. Nor does it make the notion of vegetarianism appealing. Quite the opposite is true; if meat symbolizes prosperity, people want it. Most Egyptians consider their daily diet incomplete without meat with at least one meal, usually lunch. When the price of red meat recently went up, Egyptians reluctantly started buying more chicken.

Giving up meat for ideological reasons—boycotting the industry, whether because of cruelty toward animals or environmental impact—has not caught on widely here, yet. The recent exploits of Peta activists in Cairo were lost in cultural translation (of course, Peta is not known for delivering messages with particular sensitivity). Vegetarianism seems to be largely considered a venture undertaken for health purposes, specifically weight loss. It’s a small irony, then, that the prevalent Egyptian vegetarian foods mentioned above are neither vegetable-based, nor healthy.

Samia Salim is an Egyptian professional who represents a population of young Cairenes who favor a plant-based diet, but have no intention of cutting out meat altogether. She researches health issues on the Internet, and seeks out organic, raw produce. Salim limits her meat intake to reduce her risk of disease and gain energy, but does not think that the ideology behind vegetarianism applies to Egyptian society, at least among the Muslim community.

“We are a Muslim society,” Salim explained, “and eating animals is permitted by Islam. People might actually think that avoiding meat is going against Islam. They might wonder, why not eat what God allows them to eat?” Muslims monitor the slaughtering of animals closely according to halal standards. The problem, then, is not in the quality of the slaughtering or the treatment of animals, but in what happens after the animal is killed.

This is the opinion of Hoda Baraka, a Egyptian raised in Latin America (and a contributing editor to Al-Masry Al-Youm) who only became vegetarian upon returning to Egypt six years ago (she still occasionally eats fish). After several encounters with meat that made her ill, she found that her body could no longer tolerate it, nor did she crave it. She suspects that this is due to unregulated and unhygienic methods of cutting, packaging, and transporting the meat.

But as vegetarianism grows more popular worldwide, it increases in Egypt, too. Baraka knows several Egyptian vegetarians herself, and thinks that reception toward her own dietary habits has gotten warmer. This is mostly along generational lines; older Egyptians still grapple with it, and Baraka’s advice to vegetarians living in the country is to “be flexible” and not expect to be automatically accommodated at restaurants or dinner parties.

With a little exploration, being a vegetarian in Cairo is as easy as pie other than Shepherd’s, in a crust made without animal fat, with a gelatin-free filling. Most restaurants serve a variety of vegetarian options, and Aubergine in Zamalek even has an exclusively vegetarian menu (it was originally conceived of as a purely vegetarian restaurant, but eventually began offering meat according to demand). Rutherford praises Maadi’s Ghenghis Khan, where vegetarians can enjoy the decidedly non-Egyptian protein, tofu. You can supplement your home cooking with goods from stores like Imtenan Health Shop and Health Harvest, and Wadi Foods will deliver produce to your home.

But the real advantage to being a vegetarian in Egypt is the seasonal, inexpensive produce. Mangoes are rich in vitamins A, C, and E, all antioxidants, as well as dietary fiber. And wrenching out that stubborn seed with your canines can make even the most abstemious vegetarian feel a little bit like a carnivore. Koshary, lentils and fuul, oh my! Vegetarian fare is a natural part of Egyptian cuisine 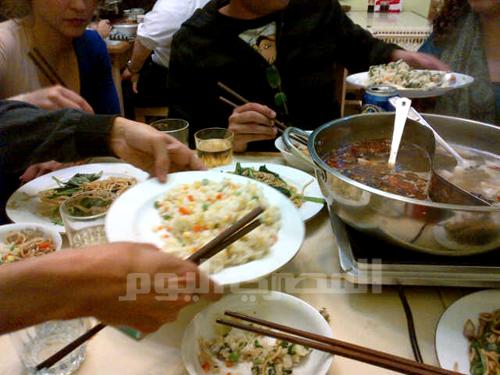