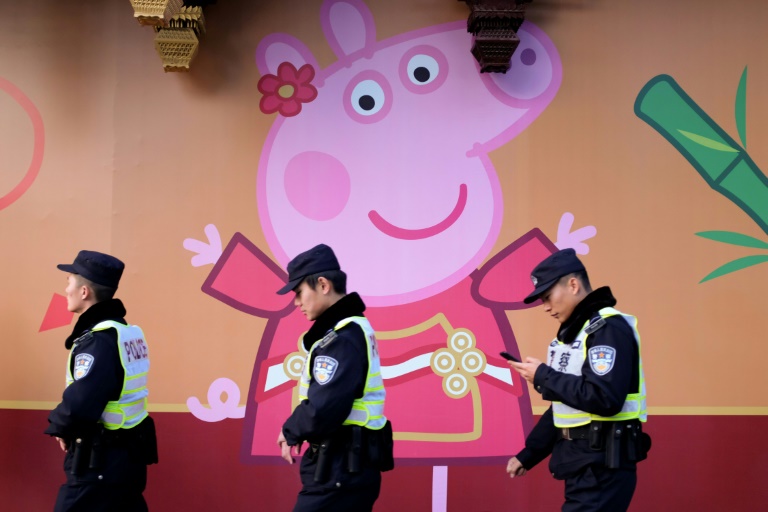 Roasted as a subversive symbol and chopped from a video streaming website in China, it seemed Peppa Pig, the loveable but imperious British cartoon character, faced a bleak future in the Communist-led country.

But her popularity has risen unabated, and now just months after state media slammed her as an emblem of the counterculture, she is playing a starring role as the country ushers in the Year of the Pig on Tuesday.

A new film titled “Peppa Pig Celebrates Chinese New Year” is being released on the first day of the holiday.

The animation, which follows the daily adventures of a bright pink piglet, her brother George and her parents, is hugely popular with Chinese children.

Last year, five-year-old twins Mi Ai and Mi Ni made a video asking to meet Queen Elizabeth II after seeing their porcine heroine visit the monarch in an episode.

The clip garnered more than nine million views and made such an impact that the pair were invited for tea by the British ambassador to Beijing and promised a tour of Buckingham Palace.

“It is really fun and the language is easy to understand”, their mother, Bella Zhang, said of the girls’ obsession with the show.

She added that the series was popular with Chinese parents because it teaches “the importance of love and cooperation”.

The cartoon’s focus on family values has resonated with Chinese parents who strictly monitor their children’s TV time, agreed Li Xin as she bought a Peppa toy for her four-year-old at a Beijing store.

Peppa Pig first broadcast in China in 2015 but last May some 30,000 clips of the cartoon were removed from a popular video streaming site, following criticism from state media.

Papers affiliated to the Communist Party wrote harsh columns about Peppa Pig being hijacked by gangsters and subversives to create videos that reject mainstream values.

Memes featuring the beloved children’s character had also started to take on dark undertones at the time, occasionally veering into violent or pornographic territory.

“No matter how gangster Peppa Pig becomes, it cannot be allowed to destroy children’s youth [or] break rules,” The People’s Daily said in an editorial last April.

The shows have been watched around 60 billion times on the country’s largest video streaming sites, including Tencent Video and iQiyi, since it first launched in China, said Jamie MacEwan from British TV analysts Enders.

“This figure is up from 24.5 billion by May 2017, showing how China’s appetite for Peppa has only increased,” MacEwan told AFP.

Now Entertainment One — the Canadian media company that currently produces the series — is banking on her popularity translating to the big screen.

A trailer for the movie, directed by Chinese film-maker Zhang Dapeng, has gone viral with the hashtag “Who is Peppa” being viewed more than 1.6 billion times on China’s Twitter-like Weibo, a spokeswoman for Alibaba Pictures Group told AFP.

The promotional clip shows a rural villager’s quest to find out what his city-dwelling grandson wants when he asks for “Pei Qi” — Mandarin for Peppa Pig — in a bid to create the perfect Chinese New Year gift in time for the boy’s annual visit.

The trailer struck a chord with Chinese audiences because it “showcases the same values highlighted in the movie -– family, reunion, harmony and love”, Zhang wrote on Weibo.

In a country where the pig is a symbol of wealth, Peppa merchandise is in high demand. There are even themed attractions — Peppa Pig World of Play opened in Shanghai in 2018 with another set to open in Beijing this year.

But the success of the Peppa brand has also brought headaches for the cartoon’s creators. Copycat merchandise — from cookies to pencil cases — can be easily found in corner stores in Chinese cities.

A spokesman for Entertainment One told AFP that in the last year more than half a million fake Peppa Pig items were seized and tens of thousands of online sale posts taken down.

He added: “In China, Entertainment One has a dedicated team working on this ongoing issue and have already successfully dealt with many infringements.”

Xi warns no one can 'dictate' China's path, 40 years on from reforms

China closes more than 13,000 websites in past three years