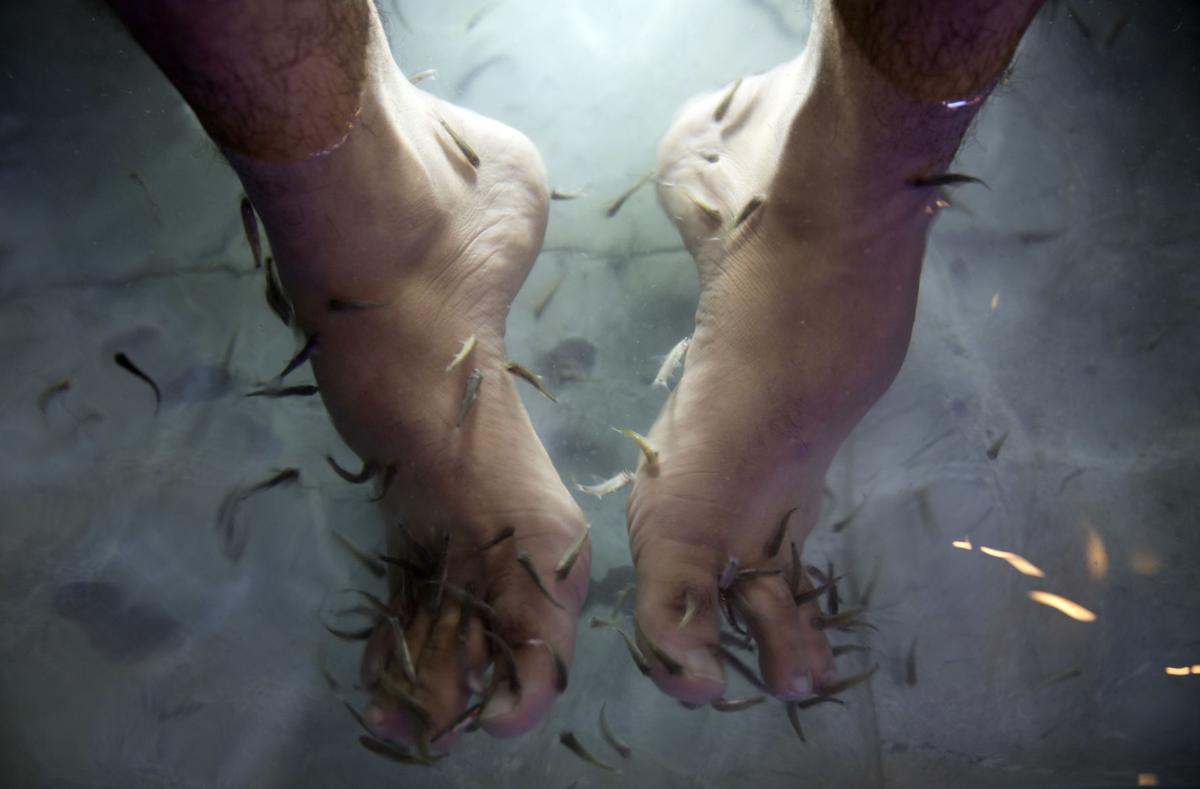 GAZA CITY, Gaza Strip (AP) — When Mahmoud Othman tried to figure a way to save his cafe business in the beleaguered Gaza Strip, he was amazed by online videos of tourists in Turkey getting fish pedicures.

That got him thinking and a unique idea was born.

After getting Israeli approval, he recently imported hundreds of Garra rufa fish, a species of small freshwater fish nicknamed “doctor fish,” from Turkey and added a fish spa section to his hookah bar and cafe in Gaza.

The fish, which feed off the top layers of the toughened, dead skin of the feet, have been used in spas as a peeling method for years around the world.

“We wanted to introduce a new idea and service at the cafe,” Othman said. “Doctor fish has remedial and recreational sides.”

Among the benefits, he believes the treatment “helps the body get rid of negative energy.”

A 30-minute session costs 30 shekels, about $8, a hefty sum for most of Gaza’s 2 million inhabitants. Gazans in the coastal territory are struggling to get by under an 11-year-old blockade by Israel and Egypt that has devastated the local economy.

The Israeli blockade has made it difficult to import many goods into the strip. Othman said it took him three attempts and over a month to get the necessary permits to bring the fish into Gaza.

He didn’t know what to expect but business has been surprisingly brisk — despite unemployment soaring over 50 percent and half of Gaza residents living under the poverty line.

Othman said he gets 30 to 40 customers a day. Many of them see the service not only as good for the health, but also as a small luxury and temporary escape from the difficult situation around them.

For four years, Mohammed al-Omari, 25, has suffered from warts that made it hard for him to wear shoes. Upon an advice from a friend, he tried fish pedicures and now believes the treatment works for his condition.

“The first time I tried it, I had a very beautiful feeling. I came for a second, third and today a fourth time,” he said after drying his feet and putting on socks. “When I find something to relieve the pain and improve my mentality, 30 shekels becomes nothing.”

On a recent evening, seven young men sat in a room lit by blue neon lights, pants rolled to the knee and feet dipped into glass tubs. As the tiny fish clustered around their toes, the customers chatted or touched and swiped their smartphones.

“It’s a beautiful thing,” said Mahmoud al-Dairi, who came for the leisure factor.

Many of those frequenting the cafe are unaware of widespread health warnings over fish pedicures — especially the high possibility of infections. Several US states and Canadian provinces consider the practice unsanitary and some animal rights groups denounce it altogether.

But Othman is aware of the pitfalls.

He said he has a strict set of procedures to sanitize the 16 tubs by giving the fish a respite of half an hour after every session and obliging the customers to wash their feet twice and apply sterilizers before dunking their feet.