Far out in the South Atlantic Ocean, invisible to the South African coastline, diver Pascal Van Erp surfaced with an abandoned lobster cage covered in algae and other marine organisms.

He pulled it up to the deck of the Arctic Sunrise, a Greenpeace vessel conducting research around Mount Vema, an underwater mountain located around 1,600 kilometers (almost 1,000 miles) northwest of Cape Town.

Underneath the layer of the dark algae was a green hard plastic cage used to trap lobsters, with a small white pot attached to it.

“We are a thousand miles off the coast of South Africa and finding abandoned fishing gear here… is extremely disgusting,” Greenpeace marine biologist and oceans expert Thilo Maack told AFP on board the ship.

Known as “ghost gear”, abandoned fishing objects make up a significant volume of plastic pollution in seas and oceans around the world and can trap large marine wildlife, causing them slow, painful deaths.

Nets, lines, cages, crayfish traps and gillnets are either lost or intentionally dumped in the ocean at an estimated average rate of one tonne per minute.

An underwater drone revealed Mount Vema, where the Greenpeace mission operated, had not escaped such pollution. Images showed a scattered array of fishing ropes and nets clinging to the 4,600-metre (15,000 foot) mountain, whose peak sits 26 meters below the surface.

Researchers on the three-week expedition could not determine how long the abandoned gear had been sitting there — but say it could have been there for more than a year given the state it was in.

The United Nations estimates that 640,000 tonnes of fishing equipment is discarded around the oceans each year, the weight equivalent of 50,000 double-decker buses, said Greenpeace.

They are estimated to account for 10 percent of the plastic waste in the oceans and seas globally, according to the UN Environment Program (UNEP) and the Food and Agricultural Organization (FAO).

But “in some specific ocean areas, fishing gear makes up the vast majority of plastic rubbish, including over 85 percent of the rubbish on the seafloor on seamounts and ocean ridges,” as well as in the Great Pacific gyre, a Greenpeace report said Wednesday.

From their underwater resting ground, discarded non-biodegradable materials continue to catch fish and crustaceans, and ensnare large mammals such as dolphins.

“(Ghost gear) is like a zombie in the water,” Maack said. “Nobody takes out the catch, but it’s still catching.”

Such pollution kills and injures more than 100,000 whales, dolphins, seals and turtles annually, according to UK-based charity World Animal Protection.

More than 300 endangered sea turtles were killed in a single incident last year after swimming into a what was believed to be a discarded fishing net in southern Mexico.

“It’s a huge problem because as they are initially set to trap and kill marine wildlife, they will do that for as long as they are in the oceans,” Greenpeace Africa’s campaigner Bukelwa Nzimande, 29, told AFP.

Plastic can take up to 600 years to break down, eventually disintegrating into harmful micro-particles that are ingested by fish and end up in people’s food.

But only one percent of the world’s oceans are covered by regional management bodies like SEAFO.

Around 64 percent of oceans lie outside national jurisdiction, according to the UN.

Environmental groups are lobbying the intergovernmental organization to come up with comprehensive governance systems that better protect marine life.

They are also pushing for stricter measures forcing fishermen to retrieve lost gear or pay for its retrieval.

Meanwhile, non-profit organizations have taken it upon themselves to do some cleaning of the seas and oceans.

“For me removing lost gear is the most exciting (thing),” said diver Van Erp, founder of Dutch-headquartered clean-up charity Ghost Fishing, which has been operating since 2012.

“When I find it I’m really thrilled,” said the 43-year old, his bright orange suit still dripping from his hour-long dive in the cold South Atlantic Ocean waters.

“It keeps catching,” said Van Erp. “It’s sort of a cycle of death.” 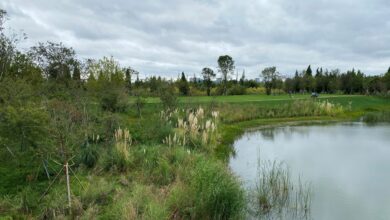