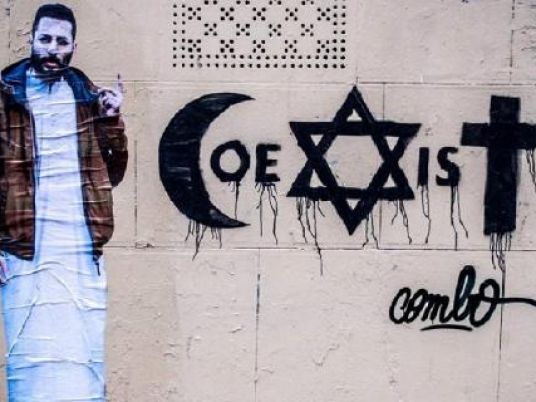 In the past week, the word “Coexist” has appeared on walls all over Paris. The graffiti messages are a show of support for Combo , a street artist who was attacked in the French capital on January 30 while hanging up a poster advocating coexistence between the world’s religions. Combo’s goal is to use art to incite reflection and combat stereotypes.

Born in the northern French city of Amiens to a Lebanese Christian father and a Moroccan Muslim mother, Combo’s interest in street art developed when he was about 16. Two years later, he started studying at Paris’s prestigious École des Beaux-Arts (School of Fine Arts). He was expelled after his first year. “People didn’t think highly of street art in those days”, he said.

Instead, Combo went into advertising. He worked in the sector for four years before returning to his first love in 2010.

“Making street art is like conducting a tiny coup"

Combo, 28, describes himself as an activist artist.

"Activism is at the heart of this art form because we display and exhibit our work in public spaces. This means that we have the floor to speak our minds… and we also have the power, in a way. I often say that street art is like conducting a coup on a wall," Combo explained.
"When you work in the street, the biggest challenge is that you have to do everything quickly. That’s why I use aerosol spray paint. I also print images on paper and then stick them to the walls. They dry very quickly. A complete work of art takes me no longer than ten minutes to put up on a wall. It’s better to work at night – it’s less risky. Very often I use well-known symbols and images, and then combine them with cartoons. It helps people to relate to the images and make them their own."

“I started a campaign called ‘jih-art’ in Beirut”
“My work reflects both current events and the place I’m in. For example, I went to Chernobyl to denounce nuclear energy, to Los Angeles to talk about legalising drugs and to Beirut to talk about jihadism," Combo said. [Editor’s note: During a trip to Hong Kong, Combo also posted images of Google pages censored by the Chinese Communist Party.] "The issues that I address vary according to the different places that I go, but they usually go beyond borders. My aim is to ask questions, though I don’t claim to have the answers."
"I spent about a month in Beirut in 2014. While there, I started a campaign called “jih-art,” he said. [Editor’s note: Combo tagged walls across the Lebanese capital with the slogan “Less Hamas, more hummus.”] "I distorted images of Daesh [also known as the Islamic State jihadist group] to mock their propaganda. Beirut is where I first created the images of myself dressed in a djellabah [a long tunic common in North Africa], which I printed to paste onto walls. Some people took the image literally, believing that I had become a jihadist. Actually, a lot of people stopped following my work at that point. However, my goal was to show that you shouldn’t judge a person based on their appearance."

Combo uses social media to gauge the success achieved by his work. Sometimes, he also hangs out for a few minutes near his artwork to watch the reactions of passersby.  “If a few people stop to look or take a photo, then I know I’ve succeeded,” he said.

After his time in Lebanon, Combo returned to France in early 2015. The attacks on Charlie Hebdo and the kosher supermarket in January inspired him to start using the slogan “Coexist,” first used by the Polish artist Piotr Mlodozeniec in 2001 in Jerusalem as a way to talk about the Palestinian-Israeli conflict. When writing the word on walls, Combo combines the symbols of the three major religions: the crescent of Islam, used for the "C," the Jewish Star of David for the "X," and the Christian cross for the "T."

Besides using the “Coexist” logo, Combo also posts questions, such as: “Did you know that Muslims finish their prayers with ‘amen’, just like Jews and Christians?”

He has also written, “In France, we have 50,000 Muslim soldiers protecting our country.” This last message, posted on a wall in Paris, was later covered up by a swastika.

"The events that happened in the wake of the attack on Charlie Hebdo – I’m talking about the Islamophobic and anti-Semitic acts – inspired me to use the slogan ‘Coexist.’ More than anything else, I wanted to break down stereotypes about Muslims – some of which they even believe about themselves – and replace those with a positive message," he said.

"I am not trying to defend religion, but I am trying to defend the people who suffer from stereotypes about their religion by bringing to the forefront a different understanding than what we see in the media, for example. In fact, I wasn’t given any kind of religious education as a child."

Since the attacks on Charlie Hebdo, my artwork rarely lasts on Paris's walls longer than two or three days before it’s removed. In the past, my artwork often lasted two or three years. Any message that is not “Je suis Charlie” [I am Charlie] seems to be erased very quickly, Combo pointed out.

He went on to say, "My written messages are often painted over in a very neat way, so I have a feeling that it’s the work of city authorities. However, I think that it is often individuals who destroy the printed images of me that I post on walls, because they are very often crudely ripped down."

Combo was beaten up by four young people in eastern Paris on January 30 while he was posting one of his images of himself wearing a djellabah next to the word “Coexist.” He said this was an attack “against the freedom of expression”. The result was a dislocated shoulder, bruises and eight days without being able to work. But Combo also received many messages of support that came from all over the world.

"I was surprised to receive so many messages full of support. I’ve been hassled by people before because I write on walls. But this was the first time that I was assaulted for my ideas and for the message that I was trying to get across," Combo said.

In reaction, Combo launched a campaign called “CoeExisTons” (“Let’s Coexist”) on February 8. On that day, 500 “Coexist” posters were distributed in front of the Arab World Institute in Paris as part of a campaign to cover the entire city with the message to “Coexist.”

Combo handing out "Coexist" posters in front of the Arab World Institute in Paris on February 8.

"The "Coexist" message wasn’t just posted around Paris. This morning alone, I got calls from Bordeaux, Chicago, Boston… Lots of people downloaded the slogan from the Internet and then printed it to post it around their own cities," he said.

The message "Coexist", spotted on a bridge in Paris.

Combo’s latest artwork is an image of two lovers – one Muslim, one Jewish, both men – kissing each other. He posted it around Paris on Valentine’s Day alongside the message, “Love is blind, and religion can blind us.” He expects it won’t last long either, but he doesn’t care: “I’m not trying to please everyone – I just want to make people think,” Combo concluded.