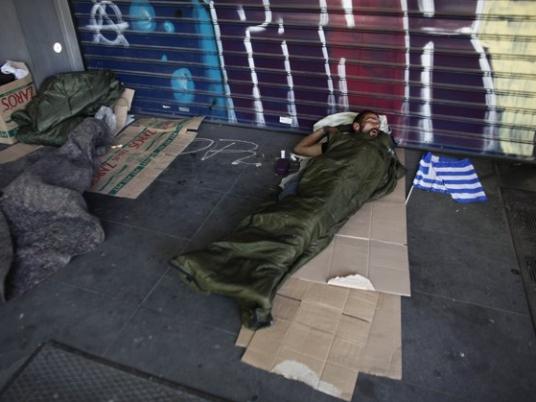 ATHENS, Greece — Greeks cast ballots on Sunday in their most critical — and uncertain — election in decades, with voters set to punish the two main parties that are being held responsible for the country's dire economic straits.

The stakes couldn't be higher.

Entirely dependent on billions of euros worth of international rescue loans from other European countries and the International Monetary Fund, Greece must impose yet more austerity measures next month, if it is to keep the money flowing and prevent a default and a potentially disastrous exit from the euro.

Thirty-two parties are vying for the support of nearly 10 million registered voters, many of whom, according to recent polls, were undecided on the eve of the election.

Abstention, once projected to reach historic highs but seen rising in recent opinion surveys, will be crucial to the final outcome. In the last national election, in October 2009, just over 70 percent of the registered voters went to the polls.

Such is the disillusionment with the socialist PASOK party and conservative New Democracy, which have been alternating in power for the last 38 years, that neither is expected to garner enough votes to form a government. Days of wrangling over forming a coalition will likely ensue, with the prospect — alarming to Greece's lenders and much of the country's population — of another round of elections if they fail.

Public anger has been so high that politicians have been forced to maintain low-profile campaigns for fear of physical attacks on the streets in a country battered by business closures and hundreds of thousands of job losses.

The last opinion polls published before a two-week blackout ahead of the election showed PASOK and New Democracy hemorrhaging support since the last election in 2009. Their support has reached historic lows, plunging to percentages last seen in the mid-1970s for the socialists and to historic lows for New Democracy, whose previous low of 33.47 percent was reached in the crushing defeat of 2009.

New Democracy leader Antonis Samaras is expected to come in first, benefiting from a bonus 50 seats in the 300-member parliament. But even with that he would fall far short of the 151 seats needed to form a government. Opinion polls projected him winning not more than 25.5 percent.

PASOK — which stormed to victory in the last parliamentary election in 2009 with 43.92 percent and George Papandreou at its helm — has seen its support collapse over the past two years. Now headed by former finance minister Evangelos Venizelos, it is fighting off a challenge by anti-bailout left-wing parties, with opinion polls projecting PASOK to win between 14.5 and 19 percent. If that happens, it would be the lowest since November 1974, when the party won 13.5 percent just two months after being founded.

"Sunday will decide whether we remain in Europe and the euro, and we stay on a course that is difficult but safe, after having covered most of the distance, to finally emerge from the crisis and [austerity]," he said during his final campaign rally in central Athens on Friday night.

"Or it will [determine] whether we embark on an adventure, sliding back many decades and taking the country to default, to leave Greeks facing mass poverty."

Repeated rounds of tax increases and reductions of salaries and pensions over the past two years have seen the country mired in a fifth year of recession and unemployment spiral to above 21 percent. The backlash has seen voters turn to smaller groups and mostly anti-bailout offshoots created by disgruntled deputies who rebelled rather than vote in favor of the measures.

"This whole situation has destroyed our dreams," said Haris Manolis, a worker at a steel factory where employees have been on strike for six months to protest layoffs and wage cuts. "We have no more dreams. We have one: to overturn them so that we can make new ones. That's it."

Up to an unprecedented 10 parties have been projected to win more than the 3 percent minimum threshold for a parliamentary seat. That includes the extreme right Golden Dawn, which has been riding high on the emotive issue of illegal immigration, promising to clean up crime-ridden, ghetto-like city neighborhoods and mine the country's borders to stop more migrants getting in.

"People are not choosing smaller parties because they believe in their agendas," political communications expert Spiros Rizopoulos said. "I doubt if anyone has ever read an agenda of a smaller party. It's because they want to protest a decision that has been made" that led Greece into the bailouts and the ensuing austerity.

For the past six months, New Democracy and PASOK have been uneasy bedfellows in a coalition government cobbled together under technocrat Prime Minister Lucas Papademos. The former European Central Bank head was appointed after Papandreou was forced to resign following a sudden decision to put the country's second bailout to a referendum.

The coalition, which initially also included a small right-wing party, was formed with the sole mandate of securing the country's second bailout and a massive bond swap deal with private creditors that wiped nearly €107 billion (US$140 billion) off the country's national debt.

With both secured in early April, elections were called.

Samaras has insisted he will not enter into a coalition with his Socialist rivals.

"It is not in the interest of the Greek people to have a power-sharing government of this kind to exist," he told supporters at his main campaign rally in Athens on Thursday night.

But the tactic is seen as an effort to drum up the maximum support before Sunday's vote, and an attempt to force new elections by refusing to cooperate with other parties is likely to anger even members of his own party who have openly supported sharing power with the Socialists.

"Whoever dares to torpedo the creation of a coalition government won't even receive his own vote in the next elections," Athens University political science professor Elias Nicolacopoulos said.