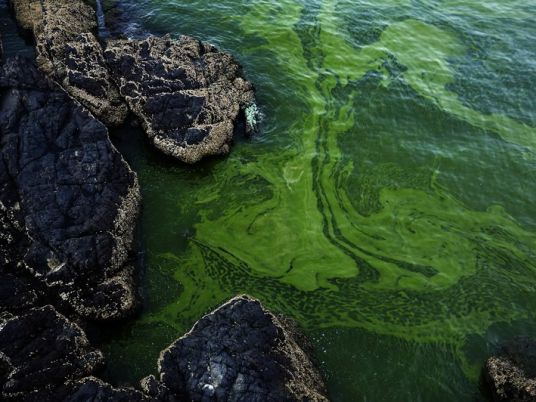 The Gulf of Oman turns green twice a year, when an algae bloom the size of Mexico spreads across the Arabian Sea all the way to India.

Scientists who study the algae say the microscopic organisms are thriving in new conditions brought about by climate change, and displacing the zooplankton that underpin the local food chain, threatening the entire marine ecosystem.

Khalid al-Hashmi, a marine biologist at the Sultan Qaboos University in Oman, wrinkles his nose as the research vessel nears the bloom. “Sea stench,” he says, referring to the algae’s ammonia secretions. “It’s here, you can smell it.”

He signals the boat to stop as it speeds beneath a gigantic rock arch off the coast of Muscat, the capital of Oman, an arid sultanate on the southeastern corner of the Arabian Peninsula. The captain kills the engine and drops anchor into a slick of bright green muck surrounded by crystal-clear blue water.

The swarms of microscopic creatures beneath the surface of the Gulf of Oman were all but invisible 30 years ago — now they form giant, murky shapes that can be seen from satellites. 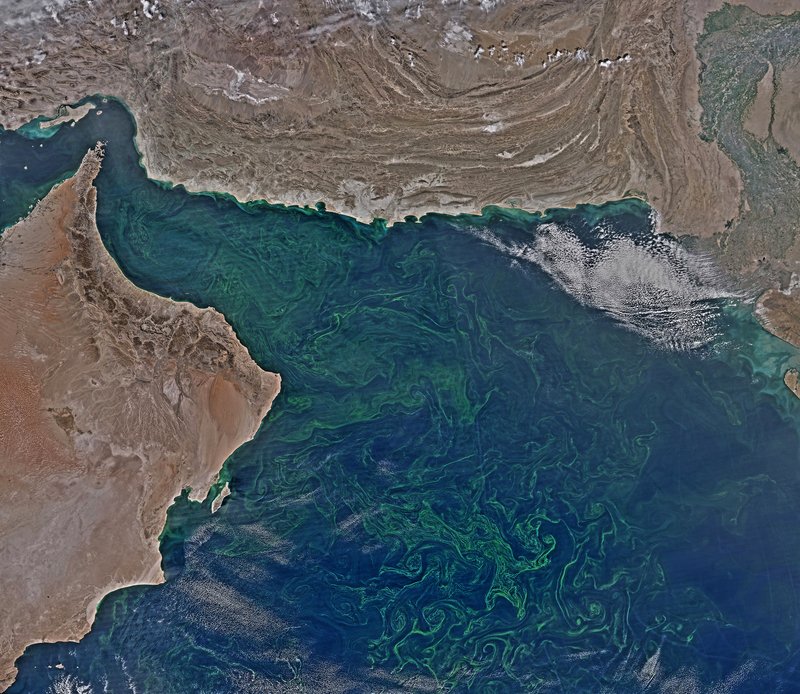 Composite image from the NASA Aqua-MODIS satellite, a mass of the algae noctiluca scintillans blooms in the Arabian Sea off the coast of Oman stretching past Pakistan to India (Norman Kuring/Courtesy of NASA, via AP)

Across the planet, blooms have wrecked local ecosystems. Algae can paralyze fish, clog their gills, and absorb enough oxygen to suffocate them. Whales, turtles, dolphins and manatees have died, poisoned by algal toxins, in the Atlantic and Pacific. These toxins have infiltrated whole marine food chains and have, in rare cases, killed people, according to the UN science agency.

In the Great Lakes of North America, Thailand and the Seychelles, the algae bloom green. In Florida they are red, in the North Atlantic they are chalky white, and in Puget Sound they are orange. The Irish call it the “sea ghost,” and the Taiwanese refer to the blooms as “blue tears.”

NASA uses satellites and floating robots to monitor the blooms, said Paula Bontempi, the manager for ocean carbon and biology projects at the US space agency. “It’s like a Van Gogh painting,” she said, referring to satellite images of swirls of chlorophyll spiraling across the world’s oceans. “Absolutely beautiful.”

It’s less attractive up close, where it can be “almost guacamole-like” in some lakes. “It smells bad, it looks bad,” she said. 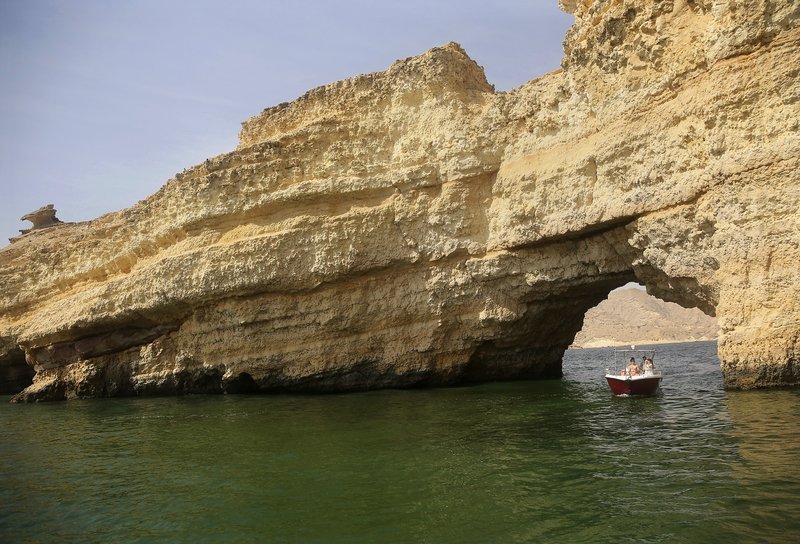 The satellite technology has enabled scientists to link the algae to higher levels of air and water pollution in recent decades, but Bontempi said questions remain. “We know that our Earth is changing,” she said. “It may be in a direction we might not like.”

Scientists based at the Lamont-Doherty Earth Observatory at Columbia University trace Oman’s blooms to melting ice in the Himalayas. Less ice has raised temperatures in South Asia and strengthened the Indian Ocean’s southwest monsoon. As this weather front moves across the Arabian Sea every year, it churned up oxygen-poor water thick with nutrients that have fueled the rise of a 1.2-billion-year old algae called noctiluca scintillans.

For the past 15 years, observatory biogeochemist Joaquim Goes, al-Hashmi and biological oceanographer Helga do Rosario Gomes have tracked blooms in the Arabian Sea using boats, satellites and remote sensors.

Goes said the blooms have caused a “short-circuiting of the food chain,” endangering other marine life.

“Normally these things happen slowly, usually we talk about tens of hundreds of years. Here it’s happening overnight,” he said. “The transformation is happening before our eyes.”

The algae blooms pose a number of threats to Oman, whose fishing and trading ships have plied these waters for centuries.

Thick blooms reduce visibility, making it difficult for divers to repair undersea gas infrastructure. It can also clog the intake pipes of the desalinization plants that produce up to 90 percent of the country’s fresh water.

Marine ecologist Ahmad al-Alawi adds these reports to four decades of observations before comparing them with satellite images of the swirling chlorophyll. He says the blooms are growing bigger and lasting longer, displacing the zooplankton at the bottom of the local food chain.

The algae has attracted more whale sharks — a major draw for divers — but many tourists have cancelled their trips at the sight of the green, murky waves, said Ollie Clarke, a dive instructor at the Bandar al-Rowdah marina near Muscat.

It also poses a threat to the country’s fisheries. An outbreak of a different kind of algae in 2008 led to the beaching of 50 tons of oxygen-starved fish, which rotted up and down the coast, al-Alawi said. 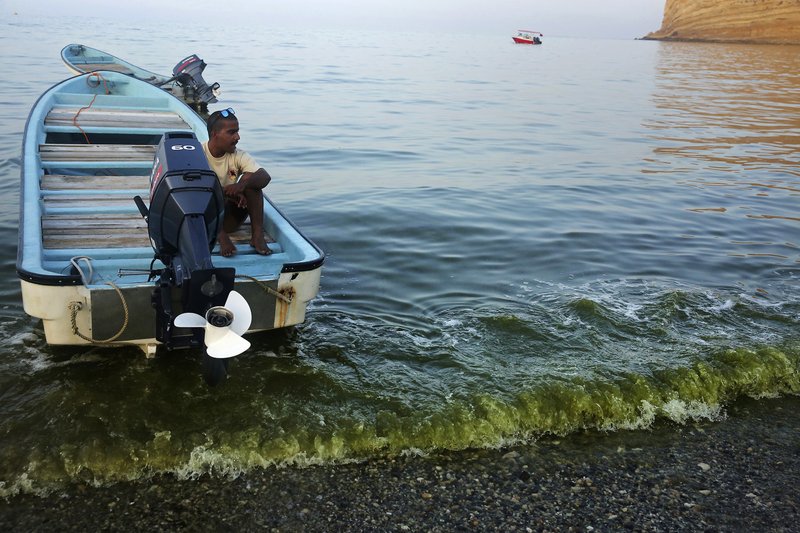 The researchers have found cause for both despair and hope by studying a live noctiluca culture in their lab: The blooms will likely spread as the Indian Ocean continues to absorb greenhouse gas emissions, but could be contained if they are sprayed with fresh water. Goes and Gomes hope to develop an early-warning system for Oman modeled on one operated by the U.S. National Oceanic and Atmospheric Administration in Florida

But Saleh al-Mashari, who learned to sail and fish as a boy in the small coastal village where he still lives, and who now captains a researcher vessel, said the damage is already done.

“The fish are migrating,” he said. “They can’t get enough air here.” 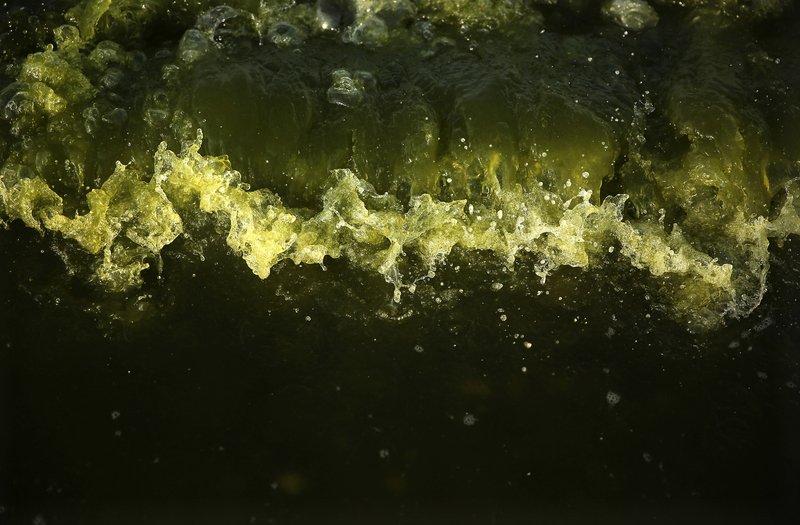 A wave colored with dark green algae washes on the beach of Bandar al-Jissah, Oman. Across the planet, blooms have wrecked local ecosystems (AP Photo/Sam McNeil) 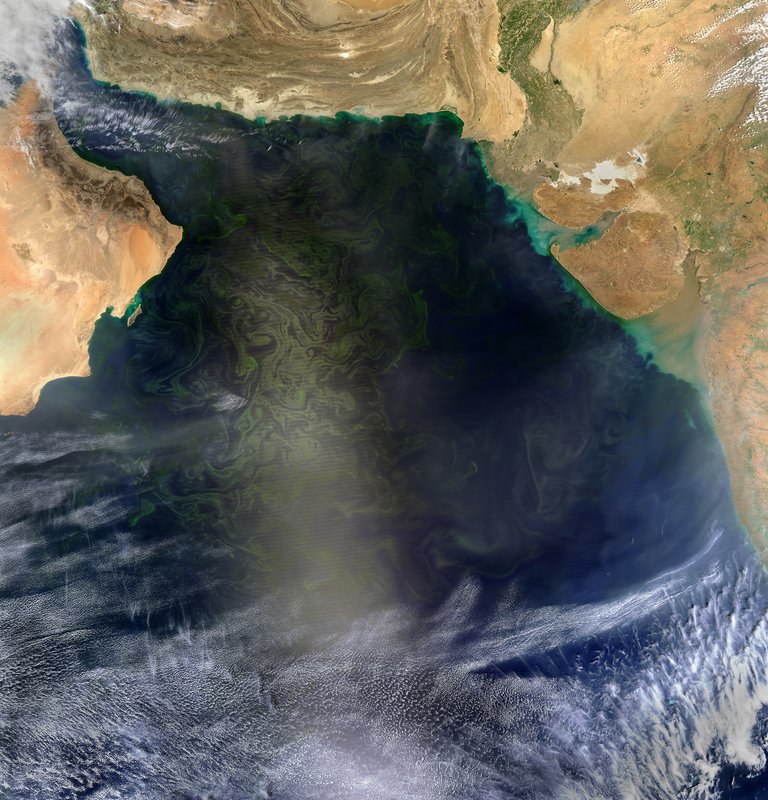 (Norman Kuring/Courtesy of NASA and USGS, via AP)