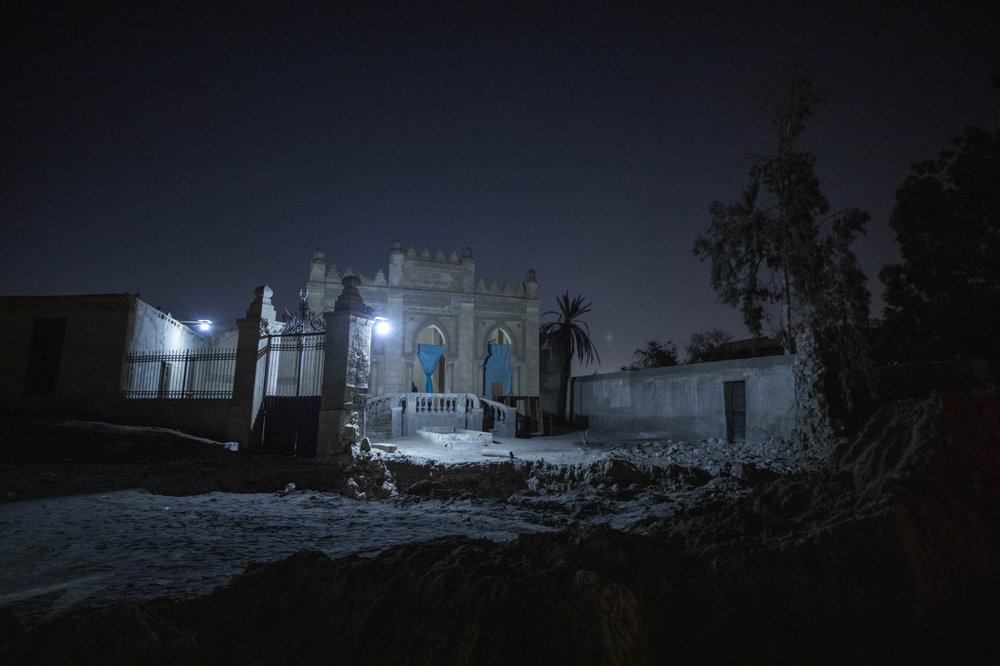 CAIRO (AP) — For centuries, sultans and princes, saints and scholars, elites and commoners have been buried in two sprawling cemeteries in Egypt’s capital, creating a unique historic city of the dead. Now in its campaign to reshape Cairo, the government is driving highways through the cemeteries, raising alarm from preservationists.

In the Northern Cemetery last week, bulldozers demolished walls of graves, widening a road for a new expressway. The graves are from the early 20th Century, including elaborate mausoleums of well-known writers and politicians. The ornate, 500-year-old domed tomb of a sultan towers in the construction’s path and, though untouched, will likely be surrounded on either side by the multi-lane highway. 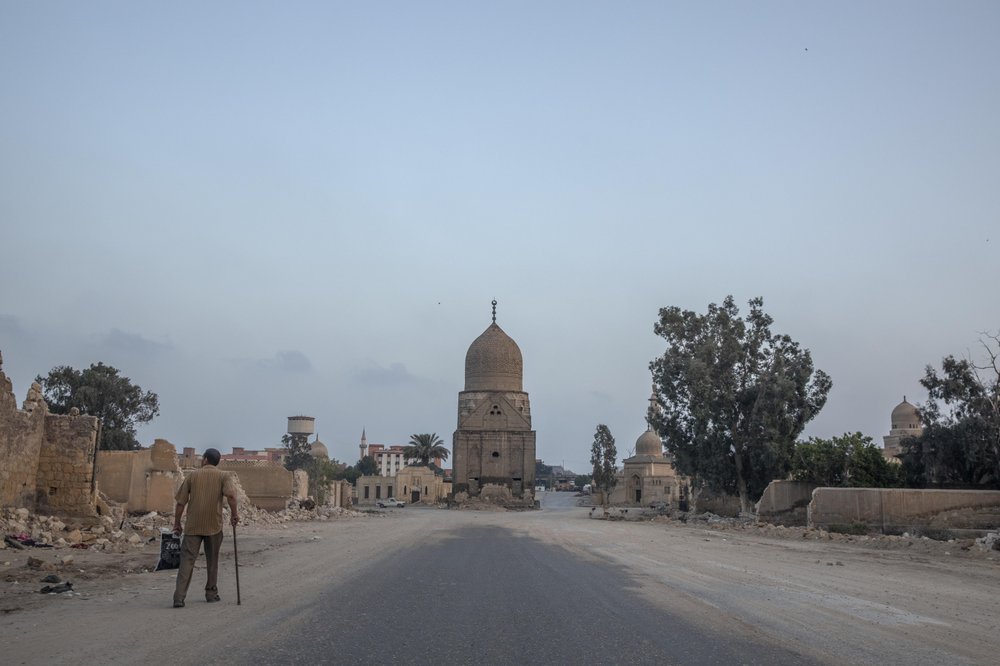 The 500-year-old domed tomb of a Mamluk sultan, Qansouh, which likely will be surrounded by freeway. (AP Photo/Nariman El-Mofty)

In the older Southern Cemetery, several hundred graves have been wiped away and a giant flyover bridge swiftly built. In its shadow sits the mosque-shrine of one of Egypt’s earliest prominent Islamic clerics, Imam Leith, from the 700s.

As bulldozers worked, families rushed to move the bodies of their loved ones. Others faced losing their homes: though known as the City of the Dead, the cemeteries are also vibrant communities, with people living in the walled yards that surround each gravesite.

Cairo’s governorate and the Supreme Council of Antiquities underlined that no registered monuments were harmed in the construction.

“It is impossible that we would allow antiquities to be demolished,” the head of the council, Mostafa al-Waziri, said on Egyptian TV. He said the affected graves are from the 1920s and 1940s, belonging to individuals who will be compensated. 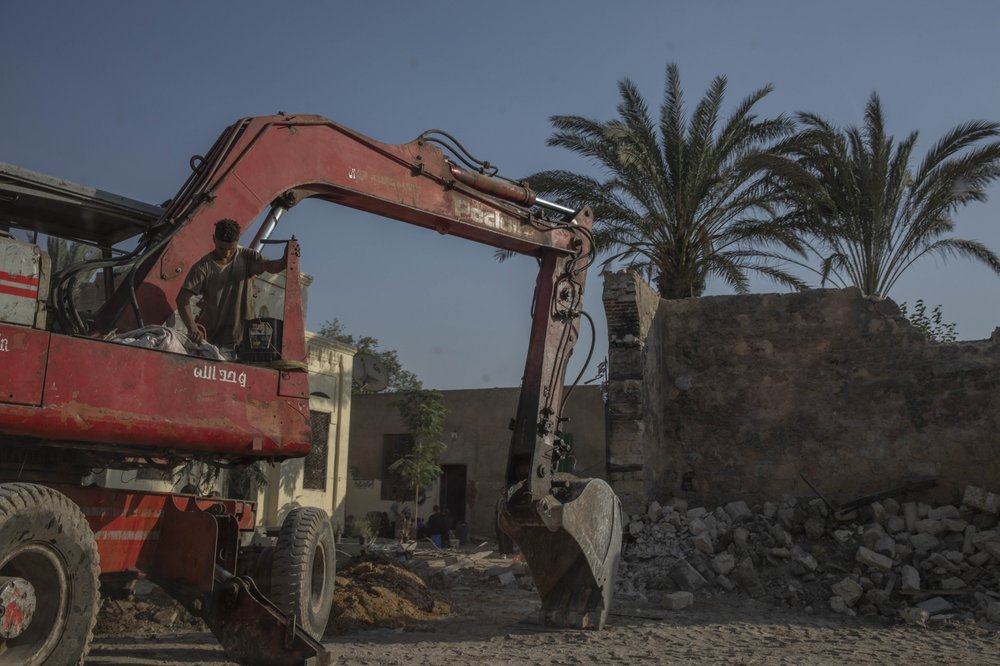 But antiquities experts said that’s too narrow a view. Among the wrecked graves are many that, though not on the limited list of registered monuments, have historical or architectural value. More importantly, the freeways wreck an urban fabric that has survived largely intact for centuries. The cemeteries are included in a historic zone recognized as a UNESCO World Heritage Site.

“It goes against the identity of the location itself. They (the cemeteries) have been an integral part of the history of Cairo since its inception,” said May al-Ibrashy, a conservation architect who chairs the Mugawara Built Environment Collective and has worked extensively in the Southern Cemetery.

The government has carried out a furious campaign of bridge and highway building in Cairo and around the country. Authorities say it is vital to ease traffic choking the city of some 20 million and better link regions, presenting the projects as part of a nationalist vision of a new Egypt.

That vision is solidly suburban. The bridges and highways mainly link up suburbs around Cairo, largely made up of upper-class gated communities, as well as a new capital being built farther out in the desert.

Critics say the construction at times has no regard for the neighborhoods of Cairo it passes through. In some cases, gardens and greenery have been torn down for bridges. One flyover was built almost the exact width of the street it runs down, and residents can literally step out of their upper-story windows onto the expressway. 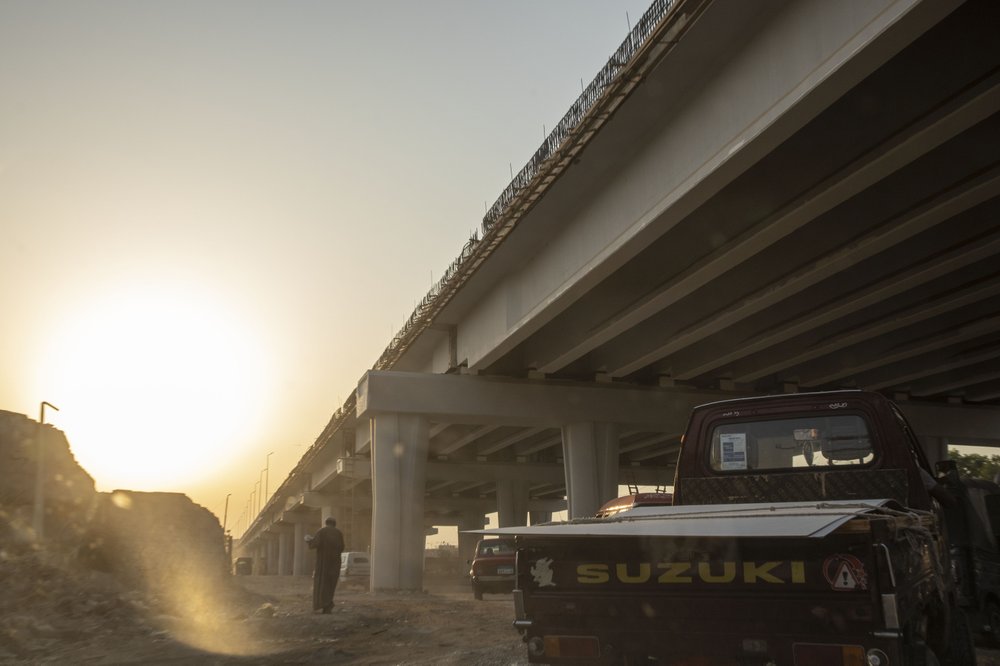 The new flyover arches through a swath of the Southern Cemetery cleared of tombs and graves. (AP Photo/Nariman El-Mofty)

The construction in the cemeteries, antiquities experts say, is a blow to efforts to preserve what is unique about historic Cairo: not just monuments spanning from Roman-era Christianity, through various Muslim dynasties to the early modern era, but also its cohesion through the centuries.

The two cemeteries extend north and south outside Cairo’s Old City, each at least 3 kilometers (two miles) long. The Northern Cemetery first began to be used by nobles and rulers in Egypt’s Mamluk sultanate in the 1300s and 1400s. The southern, known as al-Qarafa, is even older, used since the 700s, not long after the Muslim conquest of Egypt.

Until now, both have remained untouched by major road-building. Large Mamluk mortuary complexes create a skyline of domes and minarets over a landscape densely packed with graves and tombs from many eras.

“It’s a city of the dead, but it’s a living heritage. This continuity is very valuable,” said Dina Bakhoum, an art historian specializing in heritage conservation and management. “This urban fabric remained in place for a very long time,” as has its use and function — “you still have the hustle and bustle that you read about” in medieval texts.

Throughout history, people have lived in the cemeteries, and to this day people come regularly to sit at their loved ones’ graves. Sultans held sumptuous processions through the Northern Cemetery. During outbreaks of plague, Cairo’s population massed there for prayers pleading to God for relief. 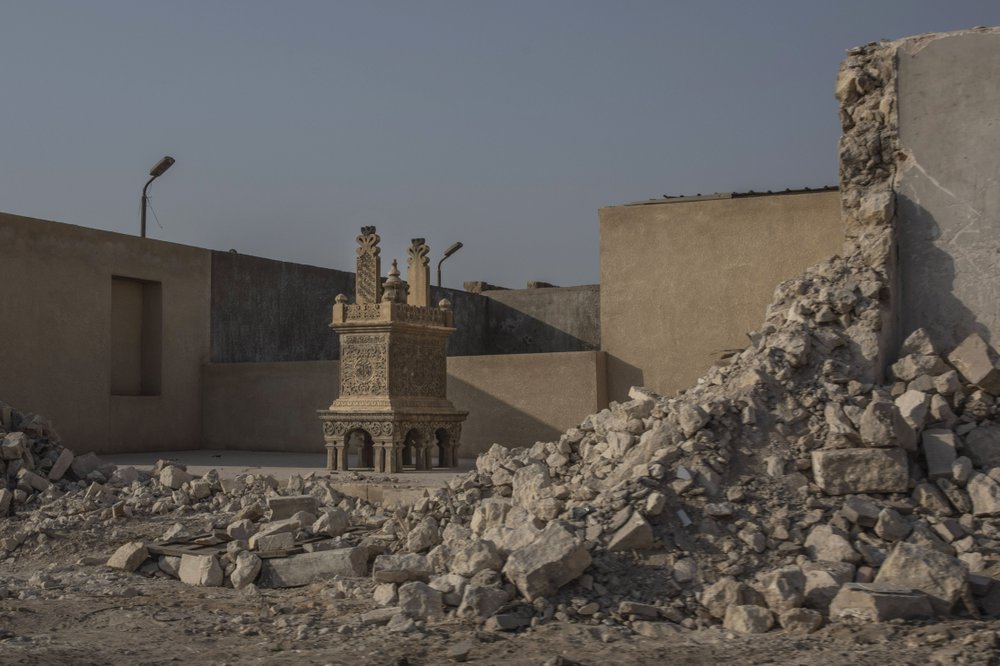 In the 14th century, the ruler of the Malian empire Mansa Musa and his entourage lived in the Southern Cemetery during a stopover en route to Mecca, giving away such fabulous amounts of gold that Egypt’s currency plunged. Mamluk texts tell of nobles riding through the cemetery at night and having visions of holy men or poets who speak, then vanish. Medieval guidebooks describe itineraries for pilgrims to tour tombs of beloved Muslim clerics and saints.

It is a testament to the cemeteries’ integrity that — seven or eight centuries later — al-Ibrashy could reconstruct those guidebooks’ itineraries in her doctoral research. Graves have been rebuilt or replaced across the eras, but largely adhering to the same pathways, sometimes preserving the original names, sometimes losing them to time.

“The thing about the cemetery is there’s a lot of hidden gems that no one knows about,” al-Ibrashy said. “You find tombstones from the Ottoman period. You find a shrine that looks modern but is actually a site mentioned in the ancient guidebooks.”

In the Northern Cemetery, the new “Firdos,” or Paradise, Expressway, will cut across its northern edge.

“I’ve lived here for 41 years, I married my husband here,” said a woman in her 60s at the mausoleum of a prime minister from the early 20th Century.

The mausoleum was intact, but bulldozers leveled its compound’s wall and the rooms that were her home. Her late husband’s family were the tomb’s guardians, and he was born and raised there. He is buried alongside the site’s owners in the mausoleum’s garden, shaded by mango and olive trees.

“We have a long connection to this place. They don’t respect the living or the dead,” she said, speaking on condition of anonymity for fear of reprisals. 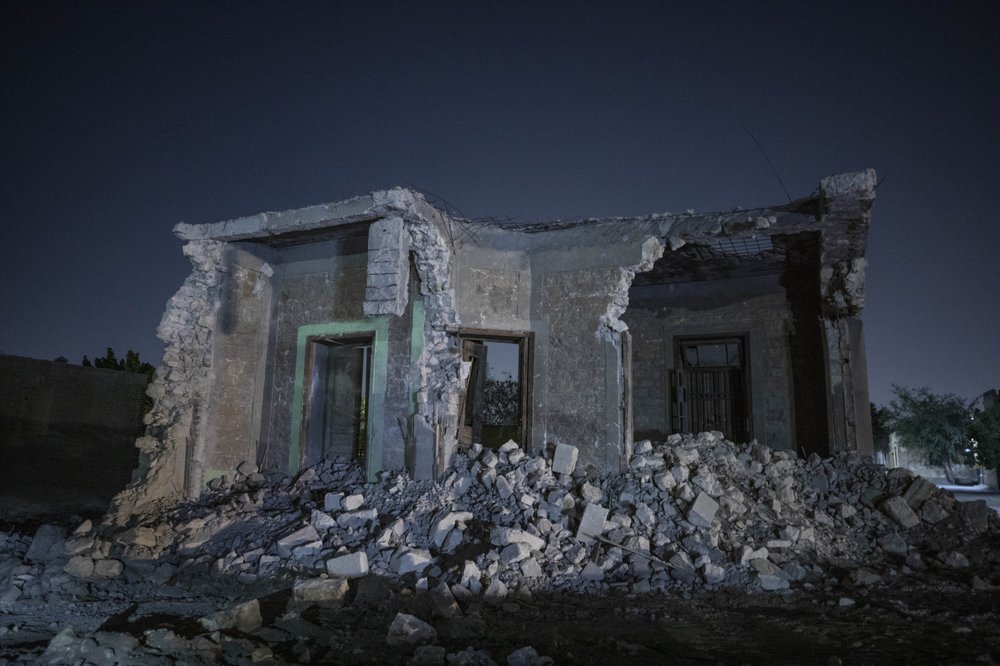 Authorities say no registered monuments were harmed in the demolitions, but preservationists are mourning the damage to the necropolis’ historic fabric. (AP Photo/Nariman El-Mofty)

In the Southern Cemetery, known as al-Qarafa, the new flyover plows through a nearly 1-mile swath once dense with graves. Underneath the span, the shrine of Imam Leith, a religious scholar who died around 791 is undamaged but now virtually hidden.

Visible a few hundred yards away is the towering dome of the Mausoleum of Imam Shafii, one of Egypt’s most beloved religious figures, from the 9th century. Shafii is said to have paid tribute at Leith’s grave, and this part of the cemetery was named after the two holy men: the Qarafa of the Two Imams. Now the bridge, soon to be thundering with traffic, separates them.

Antiquity experts said even if registered monuments were not damaged, the area is within boundaries of Historic Cairo set by Egyptian law that provides protections.

Bakhoum said some antiquities authorities in recent years have started to come around to a more comprehensive view on preserving historic areas’ broader character, not just individual monuments. The problem is, multiple government agencies have an interest and say in what happens in Cairo, responsibility is dispersed and decisions made without discussion.

What’s needed, she said, is greater consultation among all the stakeholders to find alternatives that allow development while preserving history.

“I think the real problem we have here is really how do we define what is heritage, what is valuable, and for whom.” 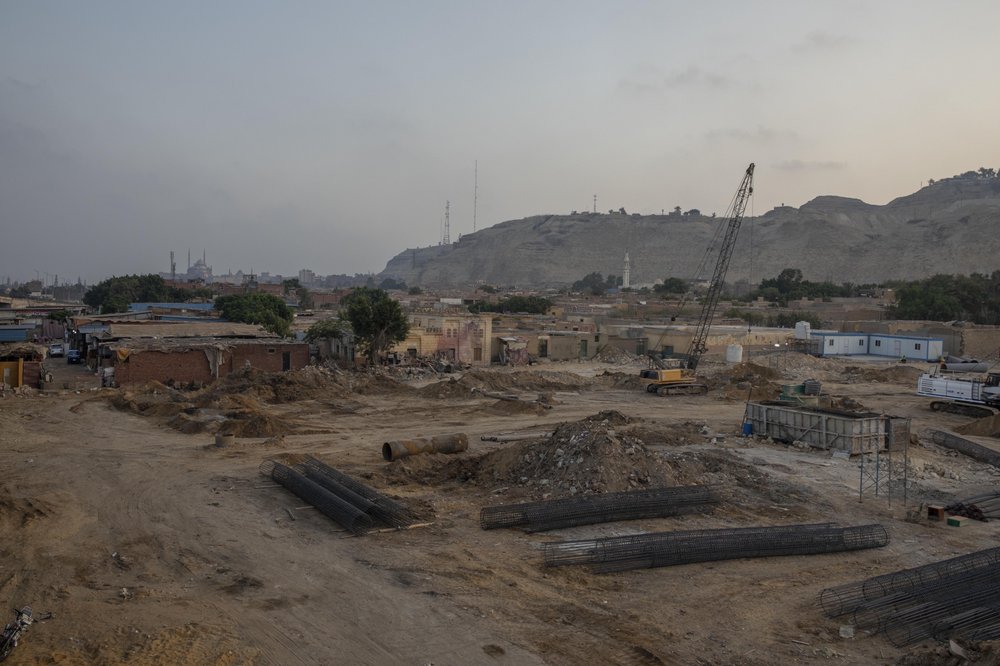 By LEE KEATH
Image: A tomb from the early 20th Century stands partially demolished amid construction of a new highway through the Northern Cemetery in Cairo, Egypt, Sunday, July 26, 2020. Dozens of graves have been partially or fully destroyed as the government builds two large expressways through the City of the Dead, a UNESCO World Heritage Site. Authorities say no registered monuments have been harmed, but preservationists have raised alarm that graves of historical value are being lost and that the multilane highways tear apart the fabric of a historic necropolis that has remained intact for centuries.(AP Photo/Nariman El-Mofty)