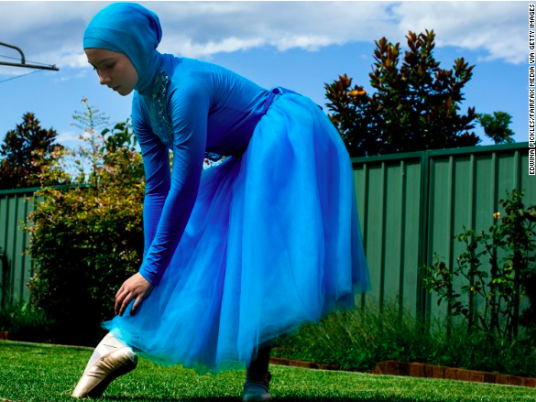 The only thing setting the Australian 14-year-old apart from every other ballet dancer? Her hijab.

Ignoring the haters, she's seeking to become the first professional ballerina wearing a hijab.
"Being Muslim makes me dance different," she explains to CNN. "Islam is really truthful and I feel more connected to God now."
Kurlow put on a tutu for the first time at the age of 2.
Growing up in the suburbs of Sydney, she dreamed of being a professional ballerina, of twirling onto the big stage.
Dancing through one pair of ballet shoes after another, she was on her way to realizing her dreams.
Then, when she was 9, Stephanie and her family collectively converted to Islam. Her Australian father, Russian mother and two brothers embraced the Quran and started praying five times a day.
Though it was a positive, unifying step for the family of five, Stephanie stopped dancing while she navigated her new faith.
That didn't last long, though. She missed the art of the dance, and she fell back into its rhythm.
Dressed in long tulle skirts and matching head coverings, she practices 30 hours a week.
"I've gone through four pairs of pointe shoes in three years," she says with a trace of pride in her voice.
When Stephanie came back to ballet, she became a regular at her mother's performing arts academy, which caters to Muslims, minorities and other people who simply want to dress modestly.
'Unique and beautiful'
Rather than seeing her religion or covered head as a hindrance, the teen says she feels she is better prepared to achieve her goals as a professional dancer.
She takes inspiration from the Chinese-Australian ballet dancer Li Cunxin, who she says "sacrificed a lot and suffered hardship to be a successful dancer."
For that reason, says Stephanie, she has started a LaunchGood fundraising campaign to be trained professionally and eventually start an academy open to all religions.
In the meantime, she wants to be a source of inspiration for young Muslim girls. She becomes animated as she explains that "some little girls are telling me they want to wear hijabs and feel unique and beautiful, too."
She says that she has received more encouragement than criticism from social media and email. She dismisses the naysayers and focuses on the beauty of ballet.
"A simple turn of your head or a move of your arm can express so much. I think it's really cool and amazing how ballerinas never show pain. We could be bleeding in our shoes and never show pain."