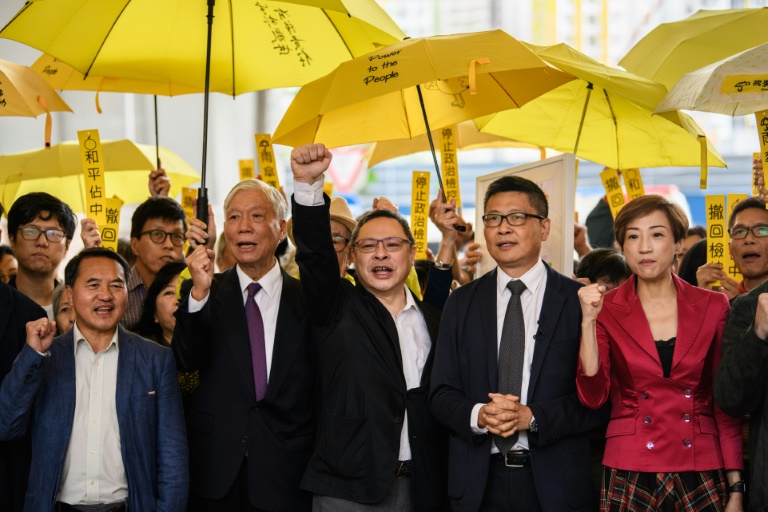 Three leading Hong Kong democracy campaigners pleaded not guilty on Monday to public nuisance charges over their involvement in massive rallies calling for political reform, as room for opposition in the semi-autonomous city shrinks under an assertive China.

The pioneering trio are among nine activists all facing public nuisance charges for their participation in the 2014 Umbrella Movement protests. The charges are based on colonial-era law and carry jail terms of up to seven years.

Sociology professor Chan Kin-man, 59, law professor Benny Tai, 54, and Baptist minister Chu Yiu-ming, 74, founded the “Occupy Central” movement in 2013 and joined with the student-led Umbrella Movement which brought parts of the city to a standstill for months, calling for free elections for the city’s leader.

The activists were welcomed outside court by hundreds of supporters shouting: “Peaceful resistance! I wanted real universal suffrage!”

Prosecutor Andrew Bruce argued that the mass protests had caused a “common injury done to the public”, who had been affected by the blockage of major roads.

He accused the trio of taking part in and supporting the demonstration “by way of unlawful obstruction of public places and roads”.

Occupy Central called for the occupation of Hong Kong’s business district if the public was not given a fair vote for the city’s leader, who is appointed by a pro-Beijing committee.

It was overtaken by the student movement that exploded in September 2014 when police fired tear gas on gathering crowds.

The Occupy trio urged people to join what became known as the Umbrella Movement as protesters used umbrellas to shield themselves from tear gas and pepper spray.

The movement failed to win reform and since then activists have been prosecuted, with some jailed.

The court was shown video clips by the prosecution Monday afternoon which included a press conference from 2013 in which the trio explained the Occupy Central movement.

In one clip Tai said the success of the movement “hinges on civic awakening” but added that civil disobedience must be “non-violent”.

In an op-ed for the New York Times Monday, Tai said there had been an “onslaught against free speech” in Hong Kong in recent years.

His comments came after Chan said the accused would become stronger through imprisonment at a farewell talk Wednesday night to a full house of more than 600 people at the Chinese University of Hong Kong, where he has been teaching for over two decades.

He told AFP that he had prepared for the physical and mental challenges of possible jail time by taking up marathon running.

Chu, who has been unwell but attended Chan’s talk, said the trio had “prepared to walk on this path”.

Hong Kong has been governed under a “one country, two systems” arrangement since it was handed back to China by Britain in 1997.

It allows far greater civil liberties than on the Chinese mainland, but there are growing fears those freedoms are being eroded.

Ahead of the trial, rights groups had urged authorities to drop what Amnesty International called the “chilling prosecution” of the nine activists, a group that includes lawmakers, student leaders and pro-democracy party campaigners.

Man-kei Tam, director of Amnesty International Hong Kong, warned there would be a “real danger” of more prosecutions for peaceful activism if the case was successful.

Human Rights Watch said the prosecutions raised further questions about how far authorities are trying to “politicize the courts”.

The trial at the West Kowloon Magistrates’ Court is expected to last 20 days.