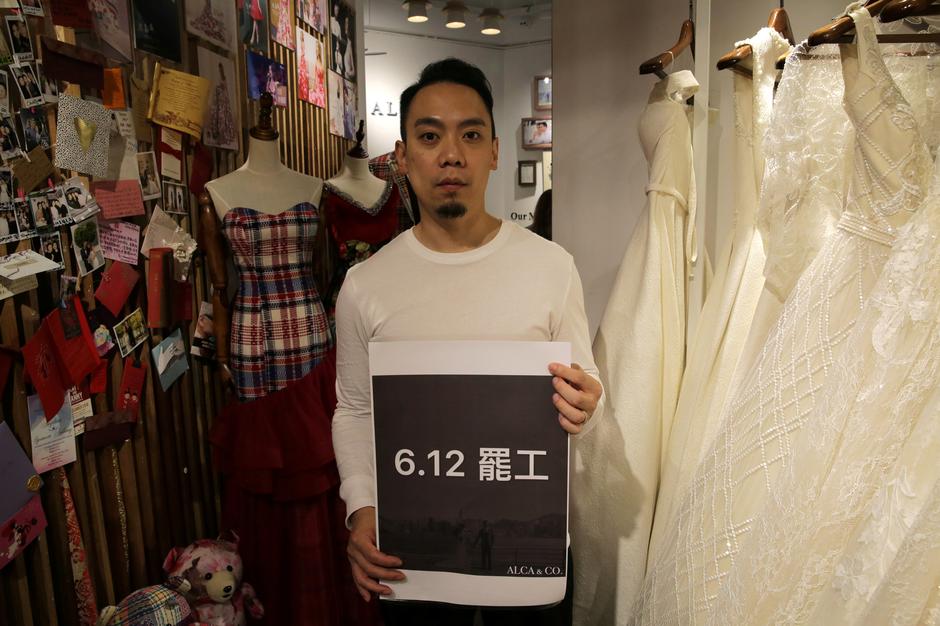 HONG KONG (Reuters) – Hong Kong retailer Alan Li shut up shop on Wednesday, joining about 100 businesses and numerous workers in a rare strike to protest against an extradition bill that many fear will undermine freedom and confidence in the commercial hub.

“Even though we can’t do business for a day, for me there is nothing more important than defending our freedom of speech and freedom of thought,” said Li, 38, before closing his Alca&Co shop in Tsim Sha Tsui, a shopping district across the harbor from Hong Kong’s high-rise finance center.

Tens of thousands of demonstrators, many of them young and clad in black, surrounded Hong Kong’s legislature on Wednesday, forcing it to postpone a second round of debate on the bill that would allow people to be sent to mainland China for trial.

Up to a million people took to the streets on Sunday, protest organizers estimated, to denounce the bill in the biggest protest the city has seen for years.

“Ah that pesky Hong Kong spirit is rearing its ugly head again. Refusing to back down in the face of adversity,” Bleak House Books said in a Facebook post announcing its strike.

The action by businesses and workers underlines the extent that the extradition bill has struck a chord in a city that has grown increasingly wary of what many see as undue meddling by Beijing.

Lawyers, students, workers and businessmen have raised concerns about human rights and the erosion of one of Hong Kong’s most important competitive advantages – the autonomy of its legal system.

Li has been selling wedding and formal dresses designed by his wife since 2015. With five staff, they keep the shop running seven days a week and normally only take a break for Chinese New Year.

He said he was uncomfortable involving his business in politics but had to make a stand.

“If the extradition law is passed, the fears we will need to face will be even more horrible,” Li said.

“The reason so many people invest in Hong Kong is because we are governed by the rule of law and have a good human rights record … if the extradition law passes, I believe investors will leave.”

China denies accusations it tramples on human rights and official media has blamed “foreign forces” for stirring up the protests.

Hong Kong Chief Executive Carrie Lam said her administration was amending the bill to include safeguards for human rights.

Stanley Ho, education secretary of the Hong Kong Confederation of Trade Union, which has about 190,000 members, said his union had encouraged its members to strike on Wednesday.

“The extradition bill is very dangerous for Hong Kong people, especially Hong Kong workers,” said Ho, adding it was unclear how many members had heeded the call.

Quentin Cheng Hin-kei, chairman of Hong Kong Social and Political Organisation Workers’ Union, told Reuters some of their members also went on strike and the union was discussing more action.

The Hong Kong Cabin Crew Federation also issued a strike call and ground staff at the city’s airport said some colleagues did not show up or called in sick. There were no signs of flight delays, border queues or other disruption.

The total number of workers who went on strike was unclear. The last strikes in Hong Kong were in 2014.

The demonstrators rallied just a stone’s throw from the financial center.

HSBC, Standard Chartered and Bank of East Asia closed some central branches. Some of the banks and the Big Four accounting firms had agreed to flexible work arrangements for staff, media reported.

Hong Kong Jockey Club, one of the city’s most famous brands, shut down three of its central betting branches, citing employee safety.

Image: Alan Li poses with a sign reading “June 12 Strike” inside his clothing store Alca&Co as he decided to close the business for a day in protest against the proposed extradition bill in Hong Kong, China June 12, 2019. REUTERS/Michelle Hennessy

Protesters gather in Hong Kong ahead of extradition bill debate