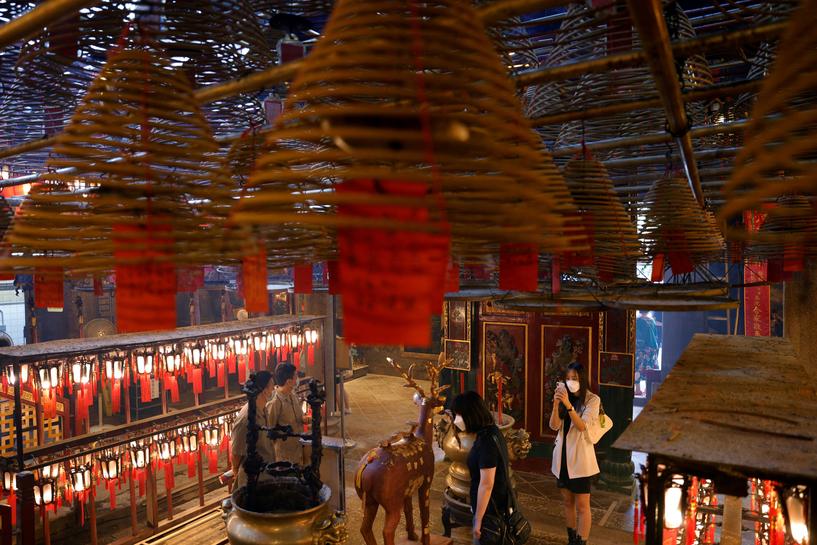 HONG KONG (Reuters) – Hundreds of parked tour buses are gathering dust at a northern Hong Kong container port, having been off the road for 10 months since authorities banned non-resident arrivals into the city due to the new coronavirus.

The area has turned into a “bus cemetery,” said Freddy Yip, president of Hong Kong’s Travel Agent Owners Association. He said the former British colony – which was the world’s leading tourist city destination last year – faces a similar fate at the end of November, when the government ends a wide-ranging wage subsidy program that has helped about two million employees in all types of industries.

The program was introduced in June and renewed in September, but the Hong Kong government has ruled out an extension beyond the end of November citing the high cost, leaving many tourism-dependent businesses on the brink of collapse, unable to find other revenue sources and unable to pay wages.

“If they cannot see any light ahead of them, they will just stop and cut their losses,” said 70-year-old Yip, who has worked in the trade for nearly 50 years.

A spokesperson for the Hong Kong government said it would “keep a close watch on the latest situation and respond in a timely manner,” but gave no further details.

About 56 million people visited Hong Kong last year. The city was ranked number one for arrivals globally in 2019 by research company Euromonitor International. Visitors, most of them from mainland China, are drawn to its vibrant mix of cultures, dramatic harbor views and world-class shopping.

The Chinese-ruled, semi-autonomous global finance hub makes about five percent of its gross domestic product, or about $18 billion, directly from tourism, not counting money spent in local shops and restaurants. Hong Kong’s tourism sector directly employs about 260,000 people, according to the government.

Mainland Chinese visitors typically spend more per day than the average resident on baby formula, cosmetics and luxury goods, driven by a perception that Hong Kong has better quality standards than at home. That source of spending was cut off in early February, when Hong Kong sealed its borders to mainland China, with exemptions only for a small number of business travelers.

Visitor arrivals have been down 96 percent to 99 percent year-on-year every month since February, according to government figures. A travel bubble with Singapore – allowing a limited number of people to move between the cities after being tested for the virus – is due to begin this week, but is not likely to halt that decline, industry executives said.

The arrangement lets travelers forgo quarantine, but is initially limited to one daily flight of only 200 passengers each way. That is a drop in the ocean for Hong Kong, which set its own record in January 2019 with 6.8 million visitors, including 5.5 million from mainland China.

Tour guide Mimi Cheung, 46, said she was pessimistic about the travel bubble, due to the limited number of people, strict regulations and high costs – around HK$2,000 ($260) for mandatory virus tests, plus around HK$6,000 ($774) to buy a tour in either city.

“The government should open the mainland border under safe conditions. It will bring some hope,” said Cheung, who has found temporary work as a night security guard to provide for her parents and two children.

Hong Kong leader Carrie Lam has said reopening the border with the mainland remains a priority, but Chinese officials have shown no indication they are willing to do so until virus cases fall to zero in Hong Kong.

The city’s government has been trying to spur local tourism by offering free tours for small groups, but operators say it has been little help.

Dozens of travel agencies have told staff to take unpaid leave from December, saying they can no longer afford to pay salaries or rent, according to employees interviewed by Reuters, travel associations and local media reports.

Violent anti-government street protests in the second half of last year discouraged some tourists, leaving many operators without cash buffers to weather this year’s crisis.

The sector, which employs around 80,000 people, has had to cancel most of this year’s events, he said.

“People are not optimistic we will be back to 2019 levels for at least 18 months to two years.”