“Grandpa Wong” holds a cane above his head as he pleads with riot police to stop firing tear gas — an 85-year-old shielding protesters on the front lines of Hong Kong’s fight for democracy.

Despite his age, Wong is a regular sight at Hong Kong’s street battles, hobbling towards police lines, placing himself in between riot officers and hardcore protesters, hoping to de-escalate what have now become near daily clashes.

“I’d rather they kill the elderly than hit the youngsters,” he told AFP during a recent series of skirmishes in the shopping district of Causeway Bay, a gas mask dangling from his chin.

“We’re old now, but the children are the future of Hong Kong.”

Research by academics has shown that half of those on the streets are between 20 and 30 years old, while 77 percent have degrees.

But the movement maintains widespread support across the public with lawyers, doctors, nurses, teachers and civil servants all holding recent solidarity rallies, even as the violence escalates.

But Wong and his friend “Grandpa Chan”, a comparatively spry 73-year-old, are among the most pro-active of this older generation.

The two are part of a group called “Protect the Children”, made up of mostly senior citizens and volunteers.

Almost every weekend, they come out to try to mediate between police and demonstrators, as well as buy protesters time when the cops start to charge.

As another volley of tear gas bounded down a boulevard in Causeway Bay — a street lined with luxury malls and fashion retailers — Chan gripped Wong’s hand tightly, stopping his old comrade from rushing back into the crossfire.

“If we die, we die together,” yelled Chan, who eschews helmets and instead always wears an eye-catching red hat daubed with slogans.

While “Protect the Children” turn up primarily to defend the youth, Wong said he tries to warn protesters not to provoke police.

“It’s wrong to throw stones, that’s why the police beat them up,” he lamented. “I hope that police won’t hit them and the children won’t throw stuff back.”

“Everyone should stay peaceful to protect the core values of Hong Kong.”

As Hong Kong’s summer of rage has worn on the violence on both sides has only escalated.

Each weekend has brought increasingly violent bouts, with a minority of black-clad protesters using molotovs, slingshots and bricks.

Police have also upped their violence, deploying water cannons and resorting to tear gas and rubber bullets with renewed ferocity.

More than 1,100 people have been arrested, ranging from children as young as 12 to a man in his mid-seventies. Many are facing charges of rioting which carry ten years in jail.

Fears have risen for the fate for one veteran protester Alexandra Wong — known as “Grandma Wong” — who attended dozens of protests waving a large British flag.

She lives in Shenzhen, a city across the border on the Chinese mainland but has not been seen at the protests since mid-August when she appeared in videos looking injured after clashes with police inside a subway station.

‘Let the elderly look after you’

Grandpa Wong says he understands why youngsters feel they have no choice but to protest.

He has watched over the decades as mainland China has grown more wealthy and powerful whilst remaining avowedly authoritarian.

“If the Chinese Communist Party comes to Hong Kong, Hong Kong will become Guangzhou,” Wong sighed, referring to a nearby mainland city.

“The authorities can lock you up whenever they want.”

Hong Kong’s protests were sparked by a controversial bill that would allow extraditions to China, raising concerns over unfair trials given the mainland’s record of rights abuses.

But it soon morphed into a wider movement calling for democratic reform and police accountability.

Roy Chan, who organizes the “Protect the Children” group, says he respects what the elderly citizens do but is disappointed they feel they need to come out.

“They should have a good life at home during the last years of their lives,” he says. “But they are in a war and protecting the youth.”

But the next day he was right back at it — this time at a protest near the city’s airport.

“Go home kiddos,” he hollered, brimming with renewed energy. “Let the elderly look after you.” 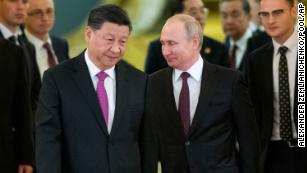 Analysis: Europe sees China through a Russian lens, and Beijing is not happy

North Korea denounces US ‘aggression’ as it marks war anniversary