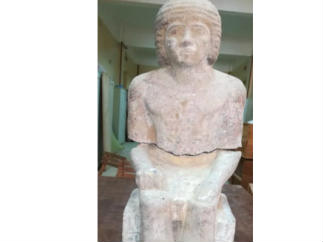 The Czech archaeological mission operating in Abusir, north of the Saqqara region in Giza and headed by archaeologist Miroslav Barta has uncovered a huge limestone and brick tomb for a man identified as Kaer S, dating back to the middle of the Fifth Dynasty in the eras of King Nyuserre Ini and King Neferirkare Kakai.

Secretary General of the Supreme Council of Antiquities Mostafa al-Waziry said that the owner of the tomb had several titles, including the “Supervisor of the King’s affairs”, and that his name was found engraved on the walls of the cemetery.

Adel Okasha, director of the Central Department of Antiquities of Cairo and Giza, said that during the excavation the mission found a rose granite statue in the main well of the tomb, broken into two parts.

The statue represents Kaer S sitting on a small backless chair, while wearing a short beret and a hair wig. His name as well as his titles were engraved on the seat.

His titles included the “Morning House Secret Keeper”, and “His Master’s Beloved”.

Barta said the archaeological mission will complete work to uncover the rest of the tomb.