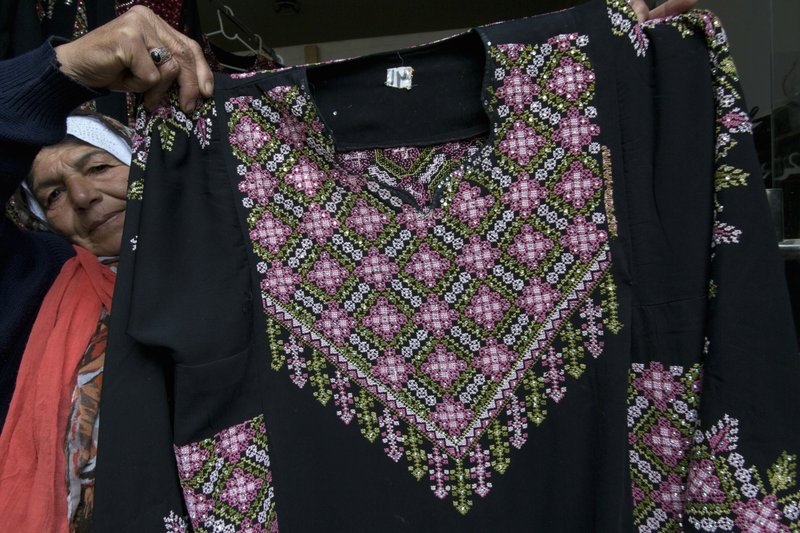 JERUSALEM (AP) — The traditional brightly embroidered dress of Palestinian women known as the “thobe” was not the type of garment one would expect to become a pop political symbol.

The robe, adorned with elaborate hand-stitched embroidery, requires months of grueling labor. Some thobes fetch thousands of dollars. The traditional textiles call to mind a bygone era of Palestinian peasant women sewing on a break from the fields.

Last month, Rashida Tlaib proudly wore her mother’s thobe to her historic swearing-in as the first female Palestinian American member of Congress, inspiring masses of women around the world, especially in the Palestinian territories, to tweet photos of themselves in their ancestral robes.

“The historic thobe conjures an ideal of pure and untouched Palestine, before the occupation,” said Rachel Dedman, curator of a recent exhibit at the Palestinian Museum focused on the evolution of Palestinian embroidery. “It’s more explicitly tied to history and heritage than politics. That’s what makes it a brilliant symbol.”

The Palestinian thobe traces its history to the early 19th century, when embroidery was confined to the villages.

While Arab women across the region have worn hand-made dresses for centuries, the thobe has taken on a distinctly Palestinian character, particularly since the establishment of Israel in 1948. Hundreds of thousands of Palestinians either fled or were expelled from their homes during the war surrounding Israel’s creation. Many took only their dresses with them into the diaspora, Saca added.

The war, which Palestinians call their “nakba,” or catastrophe, transformed the thobe.

“Suddenly, in the face of dispossession and cultural appropriation by Israelis, embroidery became an urgent task,” Dedman said. “The dress was taken up and politicized.”

Over decades of conflict that has claimed thousands of lives on both sides, Palestinian nationalism has taken on many forms.

In the early days of Israel’s establishment, it was associated with calls for Israel’s destruction and deadly attacks. Armed struggle later gave way to calls for the establishment of a Palestinian state in the West Bank, Gaza Strip and east Jerusalem — lands captured by Israel in 1967. Peace talks have been interrupted by spasms of violence, and for the past decade, a deep freeze in negotiations.

Today, the internationally recognized autonomy government of the Palestinian Authority, which administers parts of the West Bank, continues to seek a two-state solution with Israel. The Hamas militant group, which seized the Gaza Strip in 2007, still seeks Israel’s destruction, while many Palestinians, particularly the younger generation, now talk of a single binational state with Israel in which they would enjoy full equal rights.

Along the way, the thobe has grown in popularity and evolved, with dress designs reflecting history’s many dramas.

During the first Palestinian intifada, or uprising, in the 1980s, the thobe bloomed with guns, doves and flowers. When Israeli soldiers confiscated Palestinian flags at protests, women wove forbidden national maps and colors into their dresses, according to the Palestinian museum exhibit.

“It’s a way of defending our national identity,” Saca said.

The care, toil, and skill that go into making a thobe prevent the garment from becoming everyday streetwear — or protest-wear. But cheaper, mass-produced versions of the dress have sprouted up.

“A woman typically has one thobe to wear on occasions throughout her life — it’s very expensive and impractical,” said Maysoun Abed, director of a thobe exhibit in the West Bank city of Al-Bireh, near Ramallah. “But demand for the thobe still runs high as a way of expressing patriotism.”

Although the robe shares potent patriotic subtext and roots in peasant life with the black-and-white checkered kaffiyeh — made famous by Palestinian leader Yasser Arafat — the thobe is infused with nostalgic, almost mythical associations.

“Embroidery evokes the timeless connection of Palestinians to the land,” Dedman said. “It’s a soft image, referencing a deep past with which people have positive associations.”

Young Palestinian women, especially those in the diaspora, are adapting the ancestral dresses to modern tastes and trends. Girls are asking for shorter and less embroidered versions, said Rajaa Ghazawneh, a thobe designer in the West Bank town of al-Bireh.

Natalie Tahhan, a designer based in east Jerusalem, produces capes from digital prints that replicate traditional embroidery stitches, “connecting tradition with what is new and stylish.”

Tlaib’s now-viral Palestinian thobe, which the Michigan Democrat called “an unapologetic display of the fabric of the people in this country” and said it evoked memories of her mother’s West Bank village, rekindled enthusiasm worldwide about the dress.

“Rashida has become a model for Palestinian women everywhere — a strong woman proud of her national identity who can reach high,” said Saca.

Tahhan agreed, saying that “Tlaib’s thobe spread a beautiful picture of Palestine, when usually the media only show the wars.”

For Palestinian women born abroad, and refugees barred from visiting their ancestral homes in what is now Israel, thobes are a tangible connection to the land and a way of keeping their culture alive.

“These dresses are our link between the past and future,” Saca said.