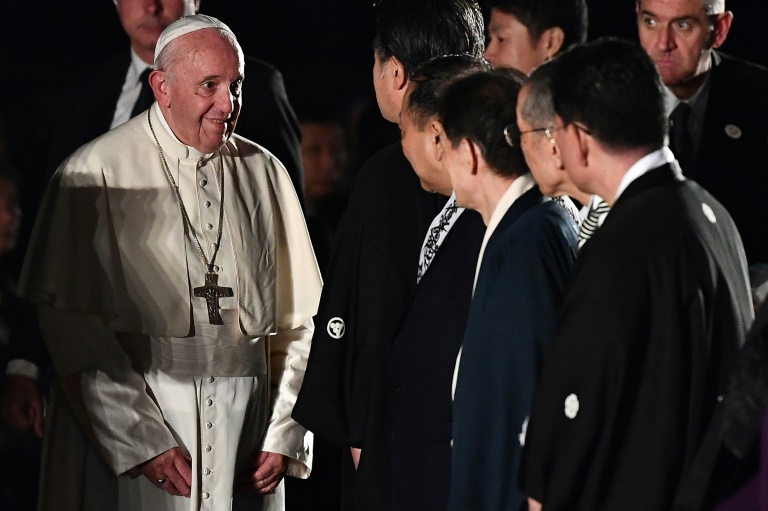 Pope Francis Sunday described the use of nuclear bombs as “a crime”, as he took his appeal for an end to atomic weapons to Hiroshima in an emotional meeting with survivors.

The visit came hours after a highly symbolic stop in the city of Nagasaki, where Francis railed against all nuclear weapons, including their use as a deterrent.

“In barely an instant, everything was devoured by a black hole of destruction and death. From that abyss of silence, we continue even today to hear the cries of those who are no longer,” Francis said at the Peace Memorial in Hiroshima.

“With deep conviction, I wish once more to declare that the use of atomic energy for purposes of war is today, more than ever, a crime not only against the dignity of human beings but against any possible future for our common home,” he added.

He first signed the book of remembrance, saying he would “grieve in solidarity” with the victims, receiving warm applause from the assembled worshippers.

He then clasped hands with several elderly survivors, some of them overcome with emotion on meeting the 82-year-old pontiff and sharing their harrowing testimony.

Francis has made the call for a world without nuclear weapons a central theme of his four-day trip to Japan, starting his visit in two cities synonymous with the horrors of the atomic bomb.

He said he felt a “duty to come here as a pilgrim of peace” and paid tribute to the “strength and dignity” of those who survived the attack and the physical and emotional toll of the aftermath.

Like in Nagasaki earlier on Sunday, he laid a wreath of white flowers as a tribute and bowed his head in prayer before a moment of reflection with deep bells tolling in the background to remember those killed in the catastrophe.

Survivors from Hiroshima described to the pope their personal experiences and backed his abolitionist message, including Yoshiko Kajimoto, who was 14 at the time of the attack.

She recalled “people walking side by side like ghosts,” telling Francis: “No one in this world can imagine such a scene of hell.”

The ageing survivors of the attacks have expressed fear that the memory of the bombings may disappear after their death, and some hope the pope will bring renewed attention to their stories.

“I believe that passing on the experience of Hiroshima to the next generation is the final mission assigned to us A-bomb survivors,” survivor Koji Hosokawa told Francis in testimony read out as he was unable to attend.

In Hiroshima, the Argentine pontiff repeated his insistence that there was no place in the world for nuclear weapons, even as a deterrent.

This marks a break with past pontiffs — in a 1982 UN speech, Pope John Paul II described nuclear deterrence as a necessary evil.

“How can we propose peace if we constantly invoke the threat of nuclear war as a legitimate recourse for the resolution of conflicts?” Francis said.

“A true peace can only be an unarmed peace.”

In Nagasaki earlier, he also took aim at the arms industry, describing money spent and made on weapons as an “affront crying out to Heaven”.

The Argentine pontiff is fulfilling a long-held ambition to preach in Japan — a country he wanted to visit as a young missionary.

“Ever since I was young I have felt a fondness and affection for these lands,” said Francis when he arrived in Japan.

As in Thailand, the first leg of his Asian tour, Catholicism is a minority religion in Japan.

Most people follow a mix of Shinto and Buddhism, with only an estimated 440,000 Catholics in the country.

Christians in Japan suffered centuries of repression, being tortured to recant their faith, and Francis paid tribute in Nagasaki to the martyrs who died for their religion, saying they had inspired him as a young Jesuit.

Francis returns to Tokyo on Sunday night where he will on Monday meet victims of Japan’s “triple disaster” — the 2011 earthquake, tsunami and nuclear meltdown.

He is also scheduled to deliver a mass at a Tokyo baseball stadium, meet Japan’s new Emperor Naruhito and hold talks with Japanese government officials and local Catholic leaders.

Image: AFP / Vincenzo PINTO Pope Francis met a series of religious leaders and survivors of the nuclear holocaust in Hiroshima

Pope lands in Thailand to kick off two-country Asian tour