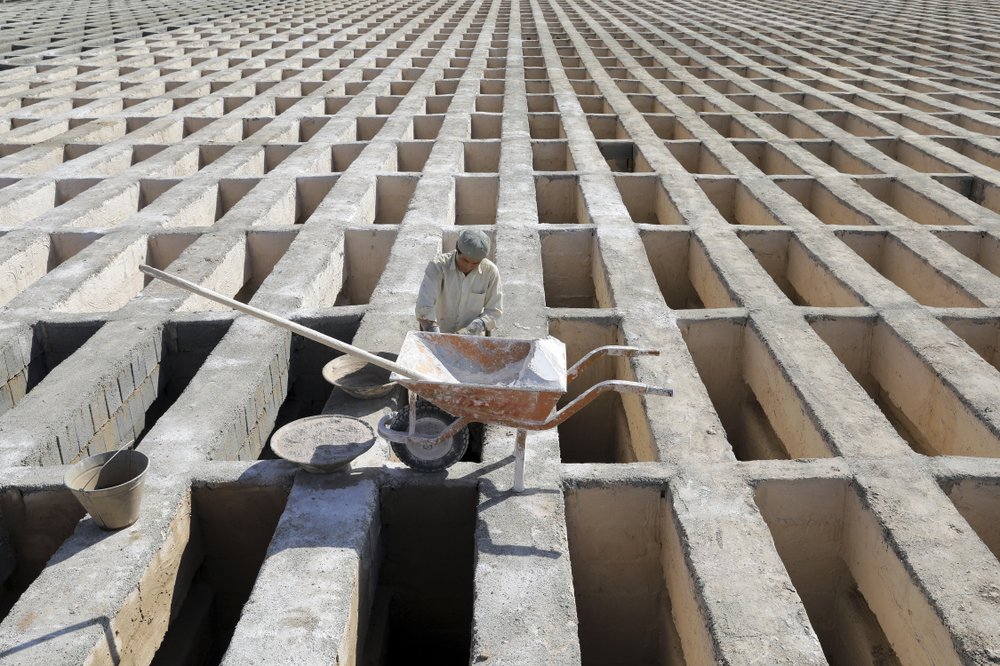 TEHRAN, Iran (AP) — For over half a century, a massive graveyard on the edge of Iran’s capital has provided a final resting place for this country’s war dead, its celebrities and artists, its thinkers and leaders and all those in between.

But Behesht-e-Zahra is now struggling to keep up with the coronavirus pandemic ravaging Iran, with double the usual number of bodies arriving each day and grave diggers excavating thousands of new plots.

“All of the crises that we have experienced at this cemetery over the past 50 years of its history have lasted for just a few days or a week at most,” said Saeed Khaal, the cemetery’s manager. Never before — not during earthquakes or even the country’s 1980s war with Iraq — has the pace of bodies flowing into Behesht-e-Zahra been so high for so long, he said.

“Now we have been in a crisis for 260 days, and it is not clear how many months more we are going to be facing this crisis,” he said.

With 1.6 million people buried on its grounds, which stretch across more than 5 square kilometers (1,320 acres), Behesht-e-Zahra is one of the world’s largest cemeteries and the primary one for Tehran’s 8.6 million people. The golden minarets of its Imam Khomeini Shrine, the burial site of the leader of Iran’s 1979 Islamic Revolution, are visible for kilometers (miles).

But it was not big enough for the coronavirus, which roared into Iran early this year, seeding the region’s worst outbreak.

Iran has reported over 700,000 infections and more than 39,000 deaths — and has set single-day death records 10 times over the past month. Almost half of the country’s reported virus fatalities have happened in Tehran, putting pressure on the cemetery.

Far past the graves of the dead from Iran’s war with Iraq and those of politicians, the cemetery has expanded to a new area. Tehran’s leaders announced in June that they were preparing 15,000 new graves there — about 5,000 more than in a typical year. Satellite pictures from September show the plots — deep enough to allow for as many as three bodies in each — newly dug, each separated by a layer of dirt and bricks.

While not all of the new graves are for coronavirus victims, most are.

For Khaal, sometimes referred to as the “mayor” of this vast necropolis, the pace is beyond anything he’s seen before.

“We used to accept between 150 to 170 dead bodies every day, but these days when we are experiencing the peak of deaths, we are accepting 350 bodies on average,” he told The Associated Press.

The tremendous workload is also putting a strain on the cemetery’s employees, Khaal said.

It’s unclear how other cemeteries in Iran are coping. In March, authorities arrested a man for posting a video online of bodies wrapped in white shrouds and zipped into black body bags at a cemetery in the Shiite holy city of Qom, alleging they all were “corona-infected.” Officials at that cemetery at the time said they were testing the bodies for the virus.

At Behesht-e-Zahra — or “Zahra’s Paradise” in Farsi, named after a daughter of the Prophet Muhammad — the bodies of known coronavirus victims arrive every day by ambulance. Mortuary attendants prepare each body for the ritual washing required for the Muslim dead. During the pandemic, that now includes the use of disinfectants.

Later, an imam recites prayers, while mourners stand on spaced-out squares that ensure they keep their distance from one another.

“These days I perform about 25 to 30 death prayers (for COVID-19 victims) on average, just myself,” cleric Meysam Rajavi said. “There are about 12 of us who pray for the same number of the dead on a daily basis. This is a big number.”

Mourners follow the body to the graveyard, where another masked staffer in gloves and disposable coveralls lowers the body to its final resting place.

The wails of loved ones echo across the expanse of freshly dug graves that await the next funeral.

A cemetery worker prepares new graves at the Behesht-e-Zahra cemetery on the outskirts of the Iranian capital, Tehran, Iran, Sunday, November 1, 2020. The cemetery is one of the world’s largest with 1.6 million people buried on its grounds, which stretch across more than 5 square kilometers, but it is struggling to keep up with the coronavirus pandemic ravaging the country. (AP Photo/Ebrahim Noroozi)

Iran to impose business curfew in capital as virus surges