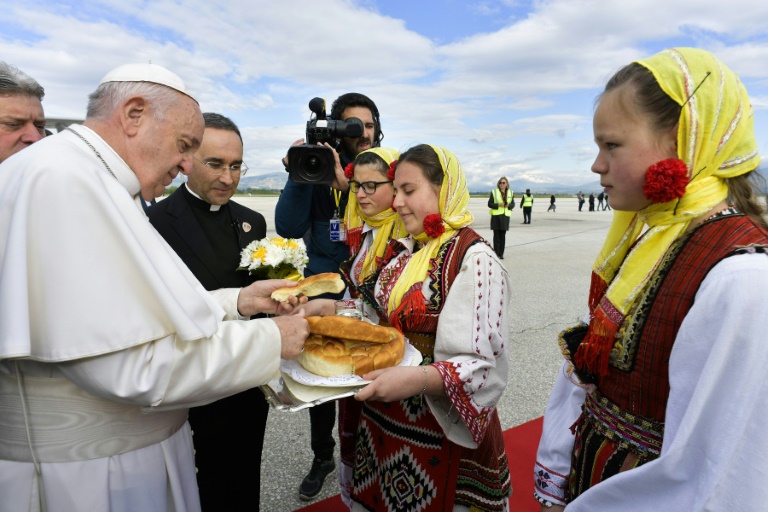 Pope Francis called on the Western Balkans to embrace its patchwork of faiths and ethnicities during a visit to North Macedonia on Tuesday, saying “respect for diversity” is key to the region’s efforts to integrate with Europe.

The pontiff was welcomed with yellow billboards and buses bearing his smiling face after he touched down in the tiny Balkan state, which is mainly Orthodox Christian but was delighted to welcome him.

Catholics make up only a small sliver — less than one percent — of the country of 2.1 million, which is also home to a large ethnic Albanian Muslim minority.

In an address before President Gjorge Ivanov and Prime Minister Zoran Zaev, Francis praised the “crucible of cultures and ethnic and religious identities” in “your land, a bridge between East and West”.

North Macedonia’s diversity, which reflects the broader Western Balkan region, forms a “mosaic in which every piece is essential for the uniqueness and beauty of the whole.”

A “peaceful and enduring coexistence” is essential for “increased integration with the nations of Europe,” he continued.

“It is my hope that this integration will develop in a way that is beneficial for the entire region of the Western Balkans, with unfailing respect for diversity and for fundamental rights.”

On Tuesday, people of all faiths were filling up Skopje’s main square for the pope’s late morning mass, which will form the final leg of his three-day Balkan tour that began in Bulgaria.

“For me this is a historic visit, not only for Catholics but also for us Orthodox, Muslims and all others living in North Macedonia,” said 18-year-old Filip Etmisovski.

Dragi Bojadziski, a 46-year-old Catholic from the south, also celebrated the once-in-a-lifetime opportunity.

“This is a historic moment that will not be repeated for a very long time, for another 100 or 200 years. It means a lot to us, the Catholic faithful here,” he told AFP as the square was filling up.

Before delivering his homily, Francis will meet with the poor and religious leaders at a memorial dedicated to Mother Teresa — Skopje’s most famous Catholic native.

The revered nun was born to an Albanian family in Skopje in 1910, when the city was part of the Ottoman empire.

In his address, Francis praised Mother Teresa, whom he canonized as a saint in 2016, for making “love of neighbor the supreme law of her life”.

“You are rightly proud of this great woman,” he said.

Though the nun spent most of her life devoted to the poorest of the poor in Calcutta, her legacy is visible in her birthplace in the form of statues, memorials and a highway in her name.

North Macedonia avoided the inter-ethnic conflicts that tore through most of former Yugoslavia as it collapsed in the 1990s and shattered along communal lines.

But the land-locked country was brought to the brink in 2001 when Albanian militants launched an insurgency in the northwest.

The conflict was eventually ended with a peace deal promising more rights and representation to the Albanian community.

The country has since kept the — sometimes uneasy — peace.

A center-left government is now focused on trying to move forward with dreams of joining the European Union.

The pope’s message of unity comes after the government recently changed the country’s name from Macedonia to North Macedonia to end a decades-old row with neighboring Greece.

The move helped clear Skopje’s path to join NATO and the EU.

But it upset critics who felt a piece of their national identity had been unjustly robbed.

Ahead of Francis’ arrival, pro-European Prime Minister Zaev, a devout Orthodox believer, said the pope was “coming to the hometown of Holy Mother Teresa… who carries a special symbol of reconciliation and solidarity”.