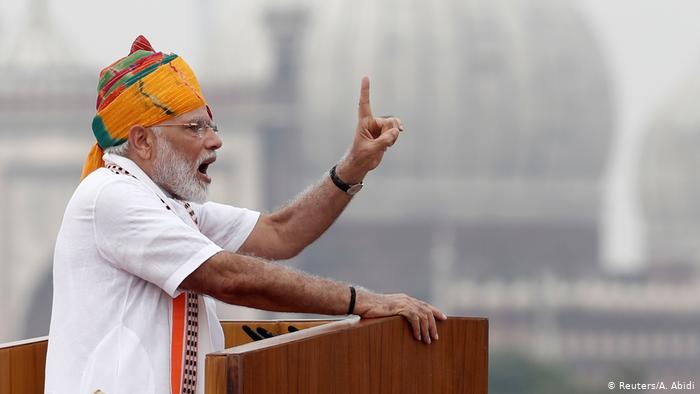 Earlier in August, Modi ordered the state of Jammu and Kashmir split into two, and his forces have held the region under lockdown and a communications blackout ever since.

Modi said his “fresh thinking” would help ensure harmony in South Asia, where India and Pakistan have fought over the control of Kashmir ever since their own partitioning in 1947. “We do not believe in creating problems or prolonging them,” Modi told the nation.

The changes to Kashmir would be key to India’s future development, Modi pledged. His aim is to make India a $5 trillion (€4.5 trillion) economy within five years.

“Let us never see wealth creators with suspicion,” Modi said. “Only when wealth is created, wealth will be distributed. Wealth creation is absolutely essential. Those who create wealth are India’s wealth and we respect them.”

Modi also said India would establish the post of chief of defense staff in order to coordinate the military’s air, ground and naval branches. The prime minister’s handpicked chief of defense staff would become the country’s fourth four-star general, joining the leaders of the army, navy and air force. “This is going to make the armed forces even more effective,” Modi said.

Khan had visited Muzaffarabad in Pakistan-administered Kashmir on Wednesday to mark his own nation’s independence. In a televised speech, he said the military was “fully prepared to respond” to any aggression. “We have decided that if India commits any type of violation, we will fight till the end,” Khan said.

Kashmir curfew to be eased for Friday prayers: police