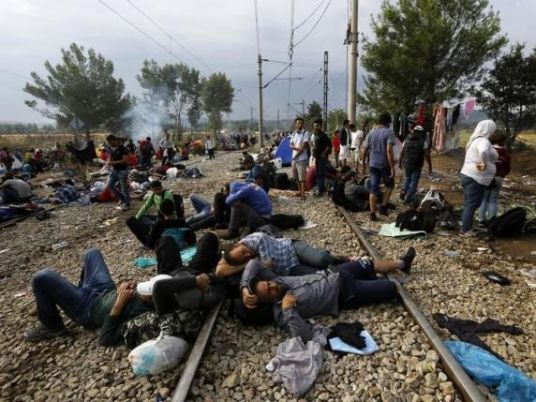 One million more people will be displaced within Syria by the end of the year if the war there continues unabated, potentially adding to the flow of refugees to Europe, a senior U.N. official said.

Yacoub El Hillo, U.N. resident and humanitarian coordinator in Syria, said the conflict had already displaced one million people within Syria so far in 2015, with intensified fighting in much of the country now in its fifth year of war.

He urged greater international support for severely underfunded aid efforts aimed at sustaining Syrians in their country wherever possible, and warned that a forecast harsh winter ahead would bring even more hardship.

"Unless something big is done to resolve this conflict through political means, the human train that has started moving out of Syria and the neighbourhood will continue to be running for many months to come," El Hillo told Reuters.

"Europe will be faced with a refugee situation similar to the one that led to the creation of UNHCR in 1950," he said, referring to the establishment of the U.N. refugee agency set up to help the displaced from the Second World War.

The conflict which has killed 250,000 people since 2011 has forced half of all Syrians from their homes, creating 4 million refugees and displacing some 7.6 million more within the country.

Its repercussions are being felt like never before in Europe, with tens of thousands of refugees trekking from Greece via the Balkans and Hungary towards western Europe.

"There are a million people displaced this year and the projection is another million will be displaced inside Syria between now and the end of the year if the violence continues to escalate," El Hillo said, speaking by phone from Damascus.

"So it is safe to assume that more people will be heading to Europe, and rightly so, because the countries that have so generously been hosting these refugees – Lebanon, Jordan, Iraq, Turkey, Egypt – are also reaching – in the case of some of them – a breaking point," he said.

The multi-sided war which began in 2011 with an uprising against President Bashar al-Assad has accelerated this year.

"I remain very concerned by Aleppo and its surroundings, and Deraa and its surroundings," El Hillo said. "These are two places in the north and in the south where I fear we will be witnessing more human movements as a result of the intensification of the fighting," he said.

Syria's neighbours have so far absorbed most of the refugees, with 1.9 million registered in Turkey, 1.1 million in Lebanon, and 630,000 in Jordan.

El Hillo urged more international support to help Syrians stay in the country – where possible. "As I speak to you today, WFP (World Food Programme) has zero dollars to provide food to 5 million people inside Syria come Nov. 1," he said.

A $2.9 billion appeal to meet needs in Syria this year has so far secured $908 million. For the rest of the year, the appeal is for $738 million, he said, describing that as the absolute minimum needed.

"We still have the opportunity to invest and help many Syrians stay in Syria. Otherwise this human train will continue running in all directions, including direction Europe," he said.

The bulk of Syrians still living in Syria are in the government-held areas of the west. Since last year, aid access to opposition-held areas has improved thanks to cross-border deliveries from Jordan and Turkey.

El Hillo said: "We have 4.8 million people in hard to reach areas in Syria. We are now able to reach more and more of them than before with cross border access, and to a lesser extent through cross line deliveries which have slowed down this year mainly due to government restrictions and increasing insecurities."

"There are 420,000 people in besieged areas in Syria, the biggest portion of them besieged by ISIL in Deir al-Zor," El Hillo said, referring to a government-held city in eastern Syria beseiged by Islamic State.

"We are ready to talk to anyone to reach civilians and deliver urgently needed humanitarian assistance, but the fact of the matter is we have been extremely unsuccessful in reaching people in areas controlled by ISIL." (editing by Janet McBride)