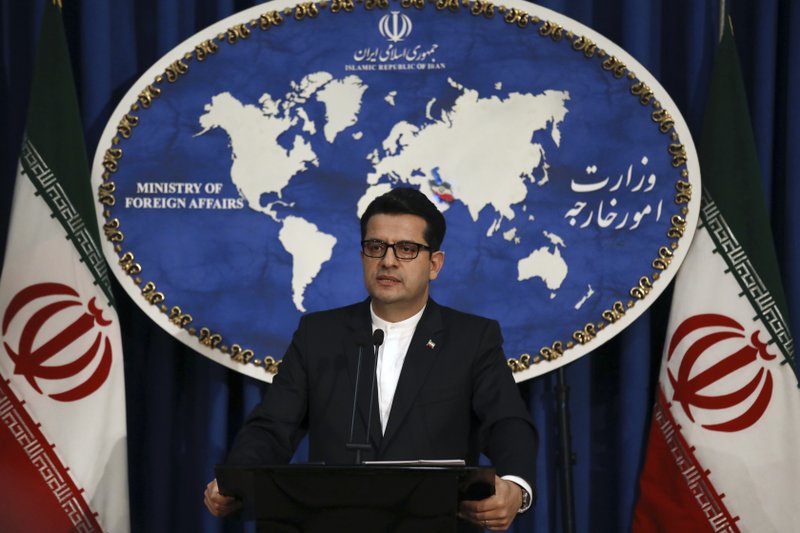 TEHRAN, Iran (AP) — Iran remains open to diplomacy to save its 2015 nuclear deal with world powers but has “no hope” in the international community, the country’s Foreign Ministry spokesman said Monday, as the Islamic Republic broke the limit the agreement put on its enrichment of uranium.

Abbas Mousavi said he had no information on how far Iran had taken its enrichment, though a top aide to Supreme Leader Ayatollah Ali Khamenei previously suggested Iran had a need for 5%-enriched uranium.

“There is a lot of speculation, so we don’t know,” Mousavi said in response to a question from The Associated Press at a weekly news conference. “We will see what we need.”

Meanwhile, he called the seizure of an Iranian supertanker off the coast of Gibraltar “piracy” but stopped short of suggesting Iran take actions against ships transiting through the Strait of Hormuz, the narrow mouth of the Persian Gulf through which 20% of all crude oil passes.

The future of the accord that President Donald Trump unilaterally pulled the U.S. from a year ago remains in question. While Iran’s recent measures to increase enrichment and break its low-enriched uranium stockpile limit could be easily reversed, Europe has struggled to respond, even after getting a 60-day warning that the increase was coming.

Meanwhile, experts fear a miscalculation in the crisis could explode into open conflict, as Trump already has nearly bombed Iran over Tehran shooting down a U.S. military surveillance drone.

Trump warned Tehran on Sunday that “Iran better be careful.” He didn’t elaborate on what actions the U.S. might consider, but Trump told reporters: “Iran’s doing a lot of bad things.”

Under the nuclear deal, the cap for enrichment was set at 3.67%, a percentage closely monitored by inspectors from the International Atomic Energy Agency, the U.N.’s nuclear watchdog. The IAEA said it was waiting for a report from its inspectors before commenting on Iran’s move.

Enriched uranium at the 3.67% level is enough for peaceful pursuits but is far below weapons-grade levels of 90%.

The decision to ramp up uranium enrichment came less than a week after Iran acknowledged breaking the deal’s 300-kilogram (661-pound) limit on its low-enriched uranium stockpile. Experts warn higher enrichment and a growing stockpile could begin to narrow the one-year window Iran would need to have enough material for an atomic bomb, something Iran denies it wants but the deal prevented.

Mousavi on Monday said Iran appreciated the efforts of some nations to save the deal, but offered a jaded tone on whether Tehran trusted anyone in the negotiations.

“We have no hope nor trust in anyone nor any country but the door of diplomacy is open,” Mousavi said.

He also gave a sharp, yet unelaborated warning to Europe about another 60-day deadline Iran set Sunday. That deadline will come Sept. 5, though Iran’s senior Vice President Eshaq Jahangiri on Monday described the deadline as being Sept. 7. The two dates could not be immediately reconciled.

“If the remaining countries in the deal, especially the Europeans, do not fulfill their commitments seriously, and not do anything more than talk, Iran’s third step will be harder, more steadfast and somehow stunning,” he said.

Behrouz Kamalvandi, a spokesman for Iran’s nuclear agency, separately hinted in a state television interview aired Monday that the country might consider going to 20% enrichment or higher as its third step, if the material is needed. That would worry nuclear nonproliferation experts, as 20% is a short technical step away from reaching weapons-grade levels of 90%. Kamalvandi also suggested using new or more centrifuges, which are limited by the deal.

Meanwhile, Mousavi said he didn’t know where an Iranian supertanker was heading when it was seized off the coast of Gibraltar. Authorities there say they seized the Grace 1, believed to be carrying over 2 million barrels of oil, over European Union sanctions on Syria — though Spain said the seizure came at the request of the U.S.

Hard-liners in Iran have demanded a British oil tanker be seized in response. State TV said Britain’s ambassador to Tehran had been summoned for a third time on Monday.

A lawmaker also has suggested Iran charge ships moving through the Strait of Hormuz, something Mousavi dismissed while insisting Iran’s right to patrol the waters off their coast.

“We are responsible for maritime protection of the Persian Gulf and the Strait of Hormuz. This is our region. This is our gulf,” he said, reiterating Iran’s longtime stance. “This is our innate duty to secure this region and sustain its security. Countries that claim from thousands of miles from here that they should guarantee the maritime security here are speaking exaggeratedly.”

In this May 28, 2019 photo, Iran’s Foreign Ministry spokesman Abbas Mousavi speaks at a media conference in Tehran, Iran. Iran remains open to diplomacy to save its 2015 nuclear deal with world powers but has “no hope” in the international community, the country’s Foreign Ministry spokesman said Monday, July 8, 2019, as the Islamic Republic broke the limit the agreement put on its enrichment of uranium. (AP Photo/Vahid Salemi)

America did not allow Iranians to benefit from nuclear deal: Jahangiri