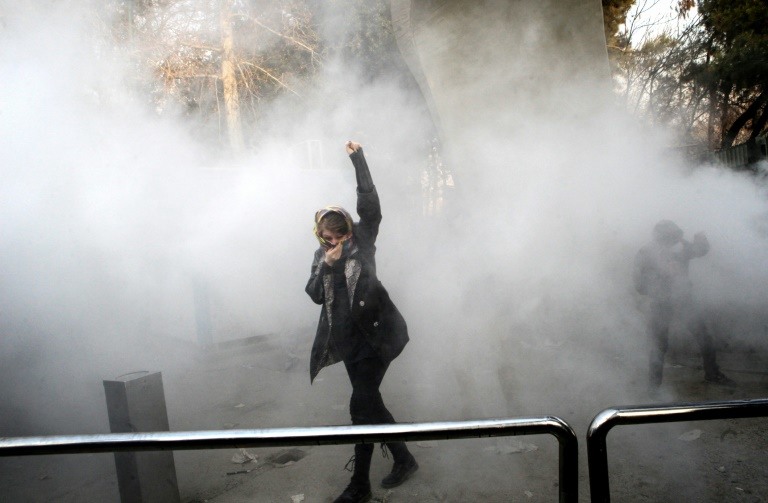 Iranian protesters attacked police stations late into the night on Monday, news agency and social media reports said, as security forces struggled to contain the boldest challenge to the clerical leadership since unrest in 2009.

Videos on social media showed an intense clash in the central town of Qahderijan between security forces and protesters who were trying to occupy a police station, which was partially set ablaze. There were unconfirmed reports of several casualties among demonstrators.

In the western city of Kermanshah, protesters set fire to a traffic police post, but no one was hurt in the incident, Mehr news agency said.

Demonstrations continued for a fifth day. Some 13 people were reported killed on Sunday in the worst wave of unrest since crowds took to the streets in 2009 to condemn the re-election of then-president Mahmoud Ahmadinejad.

The protests have put pressure on the clerical leaders in power since the 1979 Islamic Revolution. President Hassan Rouhani made a televised call for calm on Sunday, saying Iranians had the right to criticize but must not cause unrest.

In the central city of Najafabad, a demonstrator opened fire on police with a hunting rifle, killing one and wounding three others, state television said.

Earlier, state TV said armed demonstrators on Sunday had tried to seize police and military bases but were stopped by “strong resistance from security forces.” It gave no further details and there was no independent confirmation.

State TV had reported that 10 people were killed in protests on Sunday. On Monday, that death toll rose when the deputy governor of the western Hamadan Province, Saeed Shahrokhi, told ISNA news agency that another three protesters were killed on Sunday in the city of Tuyserkan.

Hundreds have been arrested, according to officials and social media. Online video showed police in the capital Tehran firing water cannon to disperse demonstrators, in footage said to have been filmed on Sunday.

Protests against economic hardships and alleged corruption erupted in Iran’s second city of Mashhad on Thursday and escalated across the country into calls for the religious establishment to step down.

Some of the anger was directed at Ayatollah Ali Khamenei, breaking a taboo surrounding the man who has been supreme leader of Iran since 1989.

Video posted on social media showed crowds of people walking through the streets, some chanting “Death to the dictator!” Reuters was not immediately able to verify the footage. The Fars news agency reported “scattered groups” of protesters in Tehran on Monday and said a ringleader had been arrested.

“The government will show no tolerance for those who damage public property, violate public order and create unrest in society,” Rouhani said in his address on Sunday.

Unsigned statements on social media urged Iranians to continue to demonstrate in 50 towns and cities.

The government said it was temporarily restricting access to the Telegram messaging app and Instagram. There were reports that internet mobile access was blocked in some areas.

Iran is a major OPEC oil producer and regional power deeply involved in Syria and Iraq as part of a battle for influence with rival Saudi Arabia. Many Iranians resent those foreign interventions, and want their leaders to create jobs at home, where youth unemployment reached 28.8 percent last year.

Among reported fatalities, two people were shot dead in the southwestern town of Izeh on Sunday and several others were injured, ILNA news agency quoted a member of parliament as saying.

“I do not know whether yesterday’s shooting was done by rally participants or the police and this issue is being investigated,” Hedayatollah Khademi was quoted as saying.

Regional governor Mostafa Samali told Fars that only one person was killed in an incident unrelated to the protests, and the suspected shooter had been arrested.

Almost nine years since the “Green movement” reformist protests were crushed by the state, Iran’s adversaries voiced their support for the resurgence of anti-government sentiment.

US President Donald Trump tweeted: “The great Iranian people have been repressed for many years. They are hungry for food & for freedom. Along with human rights, the wealth of Iran is being looted. TIME FOR CHANGE!”

“I wish the Iranian people success in their noble quest for freedom,” he said in a video posted on his Facebook page.