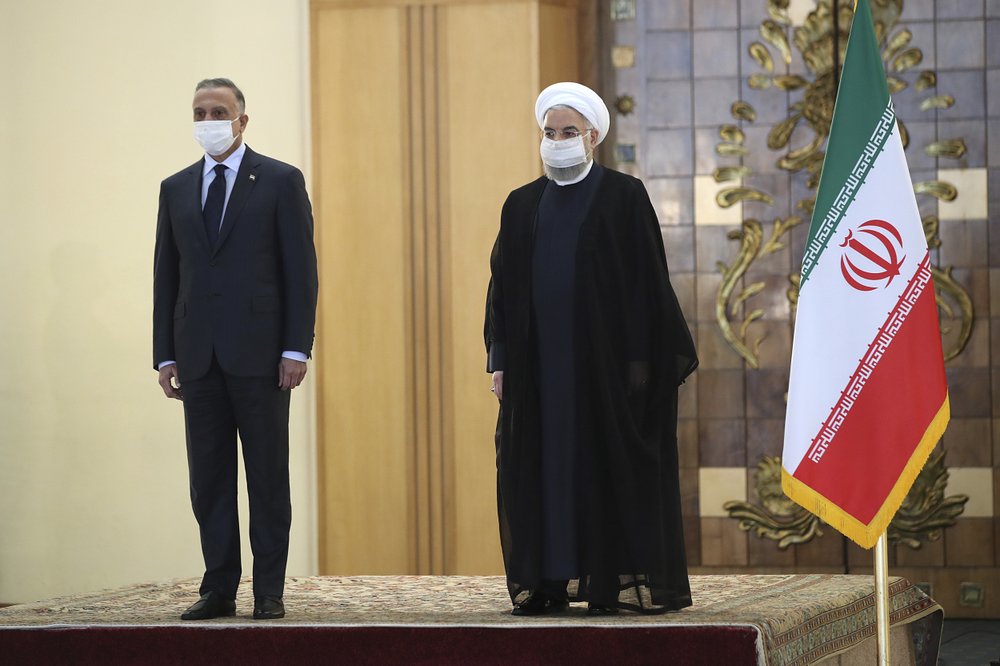 TEHRAN, Iran (AP) — Iran’s President Hassan Rouhani called a visit Tuesday by the new prime minister of Iraq, where the US military has a presence, “a turning point” in the countries’ relations and vowed to continue supporting the neighboring Arab nation.

The official website of the office of the Iranian presidency later released a photo of Rouhani and al-Kadhimi at a welcome ceremony in Tehran, showing both wearing protective face masks to help prevent spread of the coronavirus.

“We are certain that the visit will be a turning point in relations between the two countries,” Rouhani said after meeting with the Iraqi premier. “We still remain ready to stand by the Iraqi nation and apply efforts for stability and security in Iraq and the region.”

Al-Kadhimi replied: “Iraq will not allow the posing of any threat from its soil against Iran.”

Iran sees the US military presence in Iraq as a threat to Tehran.

The visit came after Iranian Foreign Minister Mohammad Javad Zarif traveled to Baghdad over the weekend. It was Zarif’s first visit to Iraq since a US airstrike in January killed a top Iranian general, Qassim Soleimani, outside Baghdad’s international airport. The strike catapulted Iraq to the brink of a US-Iran proxy war that could have destabilized the Middle East.

In Baghdad, Zarif paid a visit to the site where Soleimani was killed, saying “Iran-Iraq relations will not be shaken” despite the general’s death. Soleimani led Iran’s expeditionary Quds Force and was the architect of its regional military activities.

In Tehran, al-Kadhimi said Iraq’s foreign policy is based on “balance and avoiding any alignment.” The Iraqi premier said his country seeks to improve relations with Iran “based on non-intervention in domestic affairs of the two countries.”

Later, Khamenei received al-Kadhimi and told him Iran was determined to retaliate against the US for killing Soleimani, the supreme leader’s website said. “They killed your guests at your home and confessed to the crime openly,” he said.

However, Khamenei — who has final say on all state matters in Iran — said Iran would not intervene in Iraq’s internal affairs.

Khamenei urged Iraq to implement a January bill in parliament calling for American forces to be expelled from Iraq, saying their “presence causes insecurity.”

He said the US does not want a powerful government in Iraq, where the government is “supported by the vote of the majority.“

“In the true sense of the word, the US is an enemy and does not support an independent, powerful Iraq,” Khamenei said.

A former intelligence chief backed by Washington, al-Kadhimi took office in May after playing a significant role for years in the war against the Islamic State group, which was declared defeated in Iraq in 2017.

The Iraqi prime minister had planned a visit to Saudi Arabia on Monday, before his trip to Tehran, but postponed it following news that Saudi King Salman was admitted to a hospital in the capital, Riyadh.

Iran sees Iraq as a possible route to bypass US sanctions that President Donald Trump re-imposed on Tehran in 2018, after pulling America out of the 2015 nuclear deal with world powers.

Last year, Iran’s exports to Iraq amounted to nearly US$9 billion, the official IRNA news agency reported Tuesday. It said the two nations will discuss increasing that amount to $20 billion.

Since the outbreak of the coronavirus, religious tourism between Iraq and Iran has stopped. Before the pandemic, some five million tourists — bringing in nearly $5 billion a year — visited Shia holy sites in the two countries.

Under former dictator Saddam Hussein, Iraq waged an eight-year war in the 1980s against Iran, a conflict that left nearly one million killed on both sides.

Image: In this photo released by the official website of the office of the Iranian Presidency, President Hassan Rouhani, right, welcomes Iraqi Prime Minister Mustafa al-Kadhimi as they wear protective face masks to help prevent spread of the coronavirus, during an official arrival ceremony, in Tehran, Iran, Tuesday, July 21, 2020. (Iranian Presidency Office via AP)