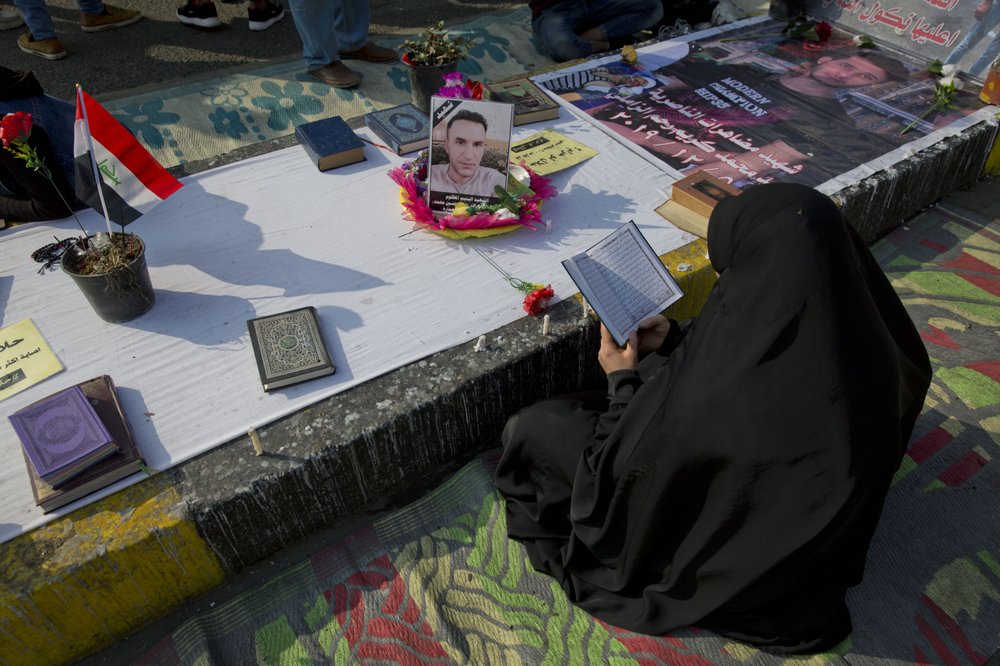 “Last seen: Friday, 9:18pm.” About an hour after gunmen began attacking a protest encampment in Iraq’s capital at the weekend, Mustafa — who had slept there for weeks — went offline.

In the days since, the 20-year-old demonstrator has not reappeared on messaging application WhatsApp, or in real life.

Late Friday, unidentified gunmen stormed and torched the multi-storey building known as al-Sinek Garage, where anti-government protesters had camped out for weeks.

At least 20 protesters and four police officers were killed in the melee, medical sources told AFP, while about 80 demonstrators were abducted.

“They filled up two charter buses with people from Al-Sinek,” said Yousef al-Harbi, an activist who was in the building when it was attacked.

Amer, a 26-year-old demonstrator, said he was nearby when gunshots began echoing from the building, so he called friends he knew were inside.

“Mustafa picked up and said, ‘things are really bad, they’re shooting at us.’ He hung up and his phone turned off,” said Amer, using a pseudonym as he has faced threats.

“We’ve called everyone — from the government to the militias,” Amer said.

Security forces say none of the demonstrators were taken into custody, while pro-Iran armed groups blamed by protesters for Friday’s killings swore they had no role in the violence.

Nineteen-year-old Sajad was among those abducted by bus on Friday night.

His family heard nothing from him until he reappeared outside his home on Tuesday morning, after being held by masked men for three days.

“They drove for about three quarters of an hour and then their captors handed them over to another group,” his father Rahim told AFP.

“They were asked for their names, their parents’ names and their addresses,” Rahim said, declining to use his full name for fear of reprisals.

The description of where they were held — on a tributary of the Tigris on Baghdad’s northeast outskirts — corresponds to where other Iraqis say they were detained.

“It’s a place overlooking the Diyala” tributary, Iraqi blogger Chojaa al-Khafaji said after he was taken to the same place on the back of being abducted from his home in October.

There masked men in black uniforms took his phones after a brief interrogation. After 24 hours, they left Khafaji in a poor district of Baghdad with $20 to return home by taxi.

Sajad had to wait 72 hours until he was released with about 30 other protesters in the middle of the night on a road outside Baghdad.

Sajad was not beaten, his father said. But others abducted from the protest encampment were less fortunate.

According to security sources, at least 35 young men taken from Al-Sinek were later found by Iraqi security forces along the bank of the Tigris, blindfolded and with their hands tied.

Footage confirmed as authentic by security forces shows about two dozen young men, many of them wrapped in bloody bandages after being taken into government custody.

“They beat us so much,” one could be heard crying.

‘Everyone is too afraid’

Since October 1, demonstrators in Baghdad and southern cities have disappeared almost daily.

In most cases, they are taken from near their homes as they return from protests.

Their relatives fear the worst.

Last week, the bruised body of a 19-year-old protester was dumped outside her home in Baghdad, while on Sunday a prominent Karbala activist was shot dead by a gunman riding on the back of a motorbike.

Abductions have continued and at dawn on Saturday, more protesters were taken from the Tigris riverfront as they drove home from Tahrir.

In view of nearby policemen, two pick-ups carrying masked men shot in the air and chased down the six protesters as they tried to flee their vehicle, a witness told AFP.

In Iraq, where militias and sectarian violence killed tens of thousands in the 2000s, kidnappings have long been common.

But “you used to be able to find out who took them,” and for a ransom obtain their release, said Haydar, whose 23-year-old cousin was recently kidnapped for several days in Baghdad.

“Now you don’t know at all. Everyone is too afraid.”