Iraqi army helicopters strafed and fired rockets at Islamic State positions in Mosul's Old City on Sunday as troops on the ground closed in on the strategic and symbolic prize of the al-Nuri Mosque.

Federal Police troops had advanced past the train station in western Mosul closer to the mosque. A police commander said they were very close to taking control of it.

Residents fled from the area, carrying bags of belongings and picking their way through the wrecked buildings as shells and gunfire echoed behind them. Most of them were women and children.

"Federal Police and Rapid Response forces resumed their advance after halting operations due to bad weather. The troops have a target of retaking the rest of the Old City," a police spokesman said.

The battle to recapture Islamic State's last stronghold in Iraq has now entered its sixth month. Iraqi government forces, backed by US advisers, artillery and air support, have cleared the east and half of western Mosul and are now focused on controlling the Old City.

Recent fighting has targeted the centuries-old al-Nuri Mosque, with its famous leaning minaret. Its capture would be a blow for Islamic State as it was from there that IS leader Abu Bakr al-Baghdadi declared a caliphate in July 2014 after the hardline militants had seized swathes of Iraq and Syria.

US officials estimate about 2,000 IS fighters remain inside Iraq's second largest city, resisting with mortar fire, snipers and suicide car bombs that plow into army positions.

The black Islamic State flag still flew from the mosque's minaret on Sunday.

Federal Police moved in on foot from near the train station towards the Old City, trotting through rubble-filled streets.

Police commander General Khalid al-Obedi told reporters on the frontline: "We are advancing toward the Old City. Their resistance is weakening. They are mostly using car bombs and that shows they are losing on the ground."

He barked orders into his radio as mortar rounds landed beyond his position.

As fighting has entered into the narrow alleyways and densely populated parts of west Mosul, more residents are fleeing liberated areas where food and water are scarce and homes are often caught in shelling.

Families with elderly relatives and children marched through western Mosul's muddy streets, past buildings pock-marked by bullet and bombs on Saturday. Some said they had hardly eaten in weeks, scrambling for supplies handed out by a local aid agency.

"It is terrible, Islamic State have destroyed us. There is no food, no bread. There is absolutely nothing," said one resident. 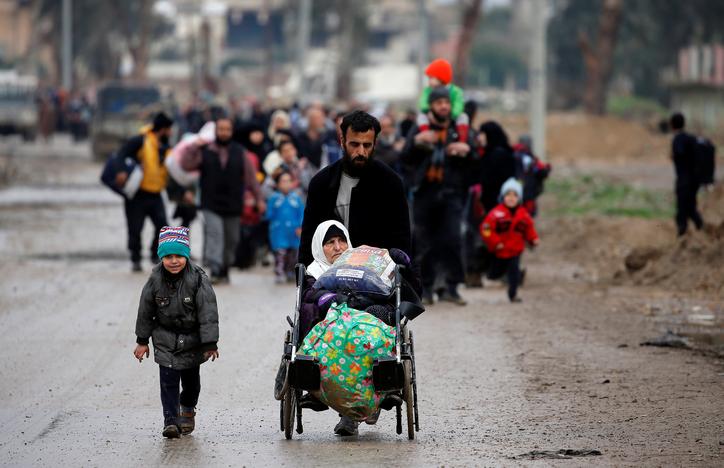 As many as 600,000 civilians may be caught inside the city with the militants. About 255,000 people have been displaced from Mosul and surrounding areas since October, including more than 100,000 since the military campaign in western Mosul began on Feb. 19, according to United Nations figures.

The last week has seen the highest level of displacement yet, with 32,000 displaced between March 12 and 15. 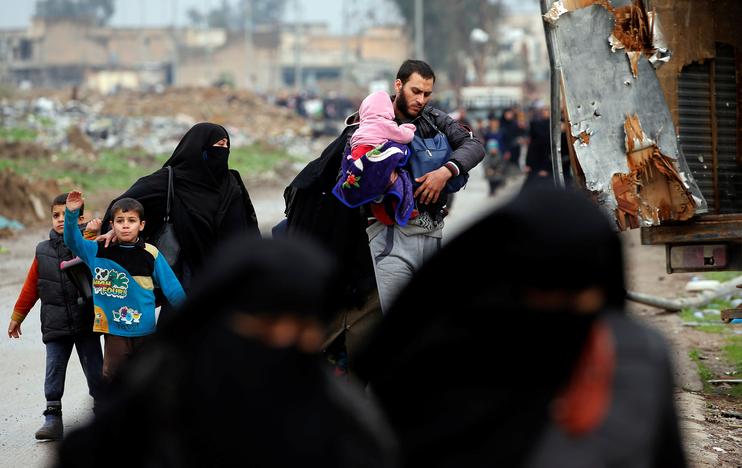 (Click here for a graphic on 'Battle for Mosul' here)

(Reporting by Patrick Markey and John Davison in Mosul; Additional reporting by Ahmed Rasheed in Baghdad, Writing by Angus MacSwan in Erbil; Editing by Keith Weir)

Iraqis celebrate their comeback with soccer tournament after decades of isolation

Sisi back home after attending Baghdad Conference for Cooperation and Partnership