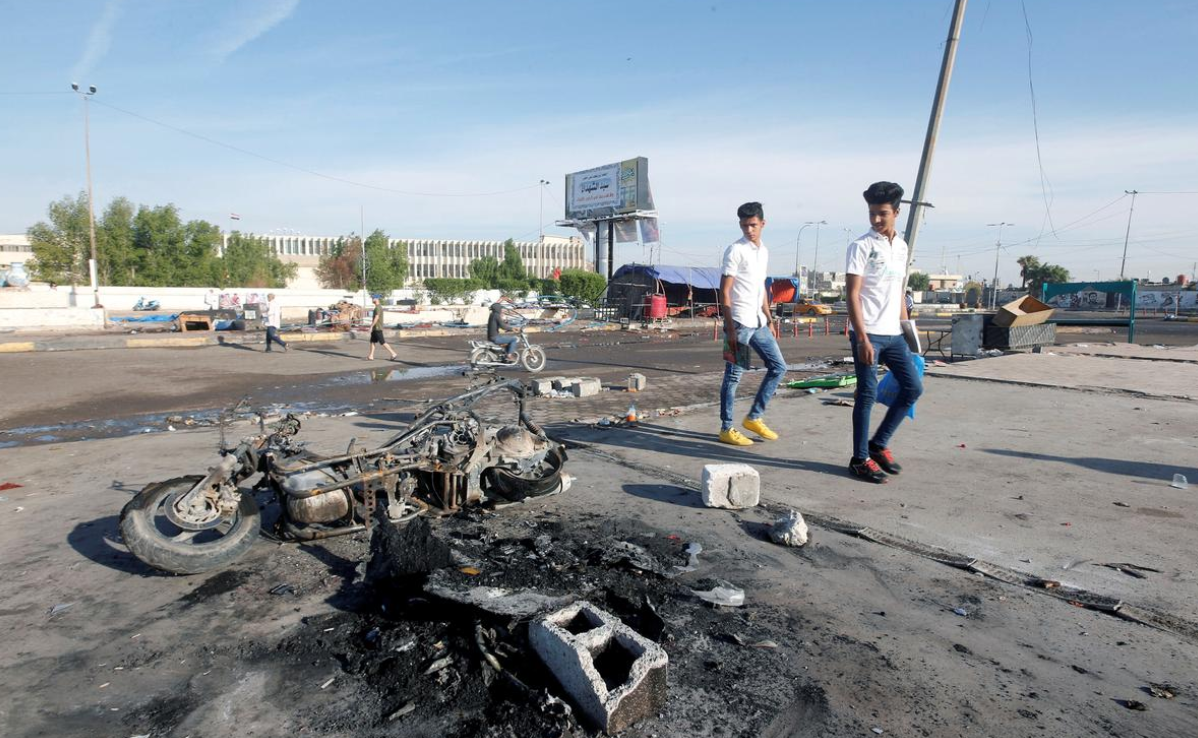 BAGHDAD (Reuters) – Iraqi security forces shot dead at least 13 protesters in the past 24 hours, dispensing with weeks of relative restraint in favor of trying to stamp out demonstrations against political parties that control the government.

After eight people were killed during the day on Monday, security forces shot dead at least five others overnight or early on Tuesday, including one killed with live fire toward a funeral procession held for another who died hours earlier, security and medical sources told Reuters.

More than 260 Iraqis have been killed in demonstrations since the start of October against a government they see as corrupt and beholden to foreign interests, above all Iran.

Most of those deaths occurred during the first week of the demonstrations, when snipers shot into crowds from Baghdad rooftops. But after the government appeared to have curbed the use of some deadly tactics, the protests swelled rapidly over the past 12 days.

The new violence flared a day after Prime Minister Adel Abdul Mahdi appealed to protesters to suspend their movement, which he said had achieved its goals and was hurting the economy.

In a televised address on Tuesday, Abdul Mahdi said the protests were having an economic impact the country could not afford, and asked demonstrators to refrain from further damaging public and private property.

“There are many ways to express opinions without disrupting public life,” he said.

Abdul Mahdi has said he is willing to resign if politicians agree on a replacement and has vowed a number of reforms. But protesters say that is not enough and the entire political class needs to go.

“After the first wave of protests, we gave the government until Oct. 25 to enact reforms,” a 30-year-old protester, who declined to give his name out of safety concerns, said in Baghdad. “It has failed to do so, (and) all of its proposed reforms were just routine, the same old stuff.”

He said the use of deadly force against protesters had radicalized protesters who initially only wanted “constitutional and legal reforms.” Now they wanted wholesale change.

The protester spoke on Baghdad’s Shuhada – or Martyrs – Bridge, where dozens were building a barricade as part of plans to occupy a third bridge on Tuesday afternoon. Teenage boys with wooden sticks made up the remainder of the vanguard.

Security forces in riot gear stood opposite them, behind a barricade made from metal railings, dustbins and barbed wire.

Protesters said they were blocking the bridge to bring the country to a standstill, civil disobedience now being their only recourse. They called on fellow Iraqis to go on strike and chastised those still going to work.

“I ask employees, why are you going to work? … Go on strike! Stay on it for 10 days, we are all suffering together,” said teacher Karrar Mohamed, 25.

Since defeating Islamic State in 2017, Iraq has enjoyed two years of comparative stability. But despite its oil wealth, many people live in poverty with limited access to clean water, electricity, healthcare or education.

A government report said nearly 150 people were killed in the first week of the unrest in early October, 70 percent from bullets to the head. Since then, security forces have mainly used tear gas, rubber bullets and stun grenades to repel demonstrators.

Though these tactics also caused fatalities, the protests grew far larger as word got out that they were safer.

By the end of last week tens of thousands of people were turning out daily for by far the biggest anti-government demonstrations since the fall of Saddam Hussein in 2003.

But Monday’s violence suggested a return to the earlier tactics, including firing live rounds into crowds.

At least six protesters were killed on Monday in Baghdad as security forces used live rounds. One protester was also killed in Shatra, a town in the south, on Monday.

Separately, at least two protesters were killed and dozens wounded when security forces opened fire on protesters camped out at the entrance to the main Gulf port of Umm Qasr.