They said the insurgents were also using civilians as human shields as government units edged toward the al-Nuri Mosque, the focus of recent fighting in the five-month-long campaign to crush Islamic State in the city that was once the de facto capital of their self-proclaimed Islamic caliphate.

As many as 600,000 civilians remain in the western sector of Mosul, complicating a battle being fought with artillery and air strikes as well as ground combat. Thousands have escaped in recent days.

"Our forces control around 60 percent of the west now," Defence Ministry spokesman Brigadier General Yahya Rasool told a news conference in eastern Mosul. "It's the Old City now with small streets and it's a hard fight with civilians inside. We are trying to evacuate them.

"We are a few hundred meters from the mosque now, we are advancing on al-Nuri. We know it means a lot to Daesh," he said, using an Arab acronym for Islamic State.

The capture of the mosque would be a huge symbolic prize as well as strategic gain for the government as it was there where Islamic State leader Abu Bakr al-Baghdadi declared the caliphate in July 2014 after the militants had captured large areas of Iraq and Syria.

Government forces backed by a US-led international coalition retook several cities last year, liberated eastern Mosul in December, and are now closing in on the west, but the militants are putting up fierce resistance from the close-packed houses and narrow streets.

Baghdadi and other leaders have fled the city for the hinterlands, where Islamic State remnants may regroup and wage a new phase of insurgency. At the same time, IS forces in the Syrian city of Raqqa are under attack in a parallel conflict. 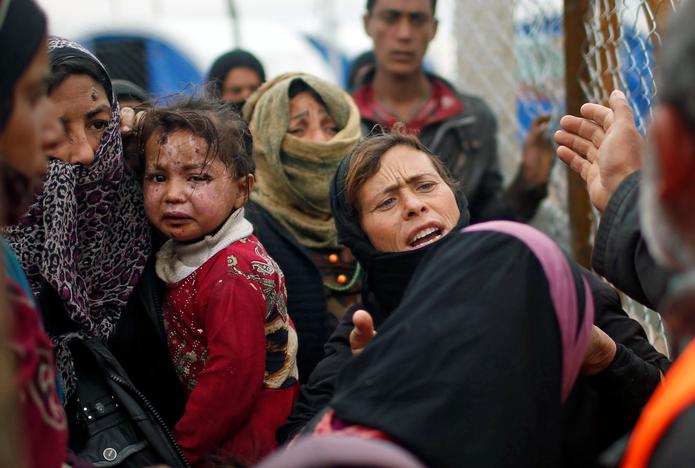 "There are lots of snipers on top of the buildings in the Old City around the al-Nuri Mosque. We need to evacuate the families from inside as they using them as a shield when we are advancing on the mosque," he told the news conference.

No precise toll of civilian casualties has been given but a prominent Iraqi politician said last week that the number could be as high as 3,500 dead since the attack on western Mosul started in mid-February.

An emergency field hospital set up by the US medical charity Samaritan's Purse says it has treated more than 1,000 patients, many of them women and children, since January. They suffered wounds from gunfire, land mines, mortar rounds, car bombings and booby-traps.

Reporters at the frontline on Tuesday said clashes took place around the railway station in some areas troops had held a few days earlier. Troops fired rocket-propelled grenades and heavy machine-guns at militants around the station as families ran across streets to avoid snipers

"We sitting inside our house and bullets were coming through our door" said one woman fleeing to government lines.

US SUPPORT TO INCREASE

Saad Maan also said the bodies of a colonel and two other officers who had gone missing during the battle had been found. The colonel had been shot. But he said the men had not been captured by the insurgents.

An Interior Ministry official told Reuters on Monday that the insurgents had captured a police colonel and eight other officers after they ran out of ammunition during a skirmish. But a Rapid Response units spokesman denied this when asked for comment on Monday night.

The issue is sensitive as Islamic State have a record of torturing, mutilating and killing military and civilian captives, and such an incident could be a blow to troops' morale.

In Washington, Iraqi Prime Minister Haider al-Abadi said he had won assurances of greater US support in the war in talks on Monday with US President Donald Trump. But Abadi cautioned that military might alone would not be sufficient.

He told a forum in Washington after his meeting with Trump that he had been told US "support will not only continue but will accelerate."

"But of course we have to be careful here," he said. "We are not talking about military confrontation as such. Committing troops is one thing, while fighting terrorism is another thing."

Abadi, who leads the Shia majority government in Baghdad, said it would be crucial to win over the local population in Sunni-dominated Mosul to achieve lasting peace.

He is in Washington this week ahead of a gathering of world leaders of the coalition fighting Islamic State, who as well as waging war in Iraq and Syria have inspired attacks on civilian targets in Europe, Africa and elsewhere that have killed hundreds of people.