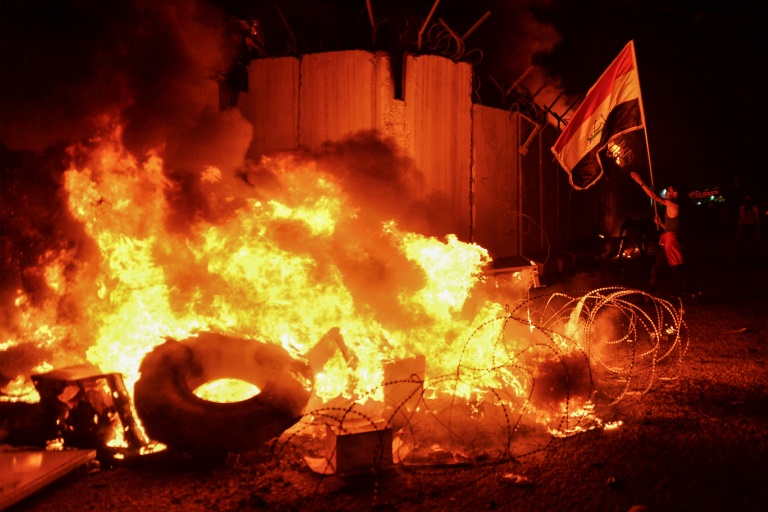 Iraqi protesters torched the Iranian consulate in the holy city of Najaf on Wednesday in a dramatic escalation of anti-government demonstrations that have left more than 350 people dead.

Tall flames and thick clouds of smoke rose from the entrance of the consulate in the southern city, AFP’s correspondent there said.

“Victory to Iraq!” and “Iran out!” protesters chanted, outraged at the country they blame for propping up a government they’ve been demonstrating against for nearly two months.

Iraq’s capital and its Shia-majority south have been gripped by the largest grassroots protests since the US-led invasion that toppled Saddam Hussein in 2003.

The change of regime 16 years ago opened the door for Baghdad’s eastern neighbor to develop tremendous economic, political and military sway, now slammed by protesters as overreach.

In Najaf on Wednesday, units fired tear gas that wounded several dozen but ultimately retreated as hundreds of people encircled the consulate and lit tires, blankets, cardboard and other items, AFP’s correspondent said.

The protesters broke into the building itself, which had been apparently evacuated of its Iranian staff.

The fires capped a deadly day in Iraq, where two protesters were shot dead in the capital, according to medical and security sources.

An AFP correspondent reported volleys of gunfire from behind concrete barricades where the security forces were deployed.

The Islamic State group, meanwhile, claimed that it was behind three deadly explosions that rocked Baghdad late on Tuesday, killing six people.

The near-simultaneous blasts were caused by explosives-laden motorcycles and a roadside bomb in Shia neighborhoods, medical and security sources said.

They were the first such attacks in Baghdad in several months to be claimed by IS, which Iraq said had been defeated two years ago.

Iraq had enjoyed a period of relative calm since then, but turmoil has struck once more with the bloody protests.

The street violence in Iraq has left more than 350 people dead and some 15,000 wounded over the past two months.

Another 100 protesters suffered injuries in two days of rallies in Hillah, just south of Baghdad, when security forces used tear gas against them.

The unrest has paralyzed daily life in many towns and cities, with schools intermittently closed, streets blockaded and government offices empty.

On Wednesday, religious authorities in Karbala shuttered private schools there and in nearby Babylon and Najaf for two days.

They feared a repeat of Tuesday’s chaos, when clashes between riot police and protesters left one dead.

Karbala, visited by millions of Shia pilgrims from around the world each year, had seen deadly skirmishes overnight and during the day.

Demonstrators on Wednesday torched tyres in and around the city, sending thick plumes of black smoke barreling skywards.

In Nasiriyah, further south, authorities ordered all public offices closed for two days, although these had been largely shut already by ongoing sit-ins and marches.

In Diwaniyah and the oil-rich port city of Basra, no security forces could be seen as demonstrators hit the squares and streets.

Picketers also sealed off the entrance to the Nasiriyah oilfield, a contributor to Iraq’s exports of some 3.6 million barrels per day.

The country is OPEC’s second-largest crude producer and the oil exported through Basra’s offshore terminals funds more than 90 percent of the government’s budget.

The industry has so far remained relatively insulated from the unrest, but Basra residents are seething over notoriously poor public services.

“It’s been 16 years that we’ve been living in chaos and corruption,” one protester told AFP on Wednesday.

“Basra should have been a wealthy city, but instead it’s a trash dump.”

Corruption is rampant in Iraq, ranked the world’s 12th most graft-ridden country by Transparency International.

A government probe found that $450 billion in public funds had been lost to graft, fake contracts and so-called ghost employees since 2003.

Most Iraqis have been unimpressed by the government’s reform plans, which include hiring drives, increased social welfare and electoral reform.

“The government has lost all its legitimacy. We don’t want them,” said one protester in Basra.

Image: The Iraqi flag is brandished by demonstrators after they set fire to Iran’s consulate in Najaf. Photo by AFP / Haidar Hamdani