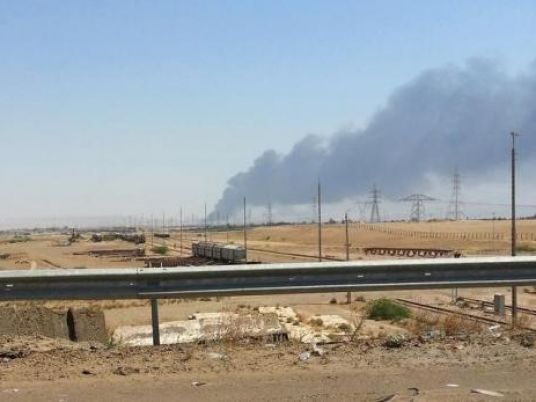 Islamic State militants struck at Kurdish forces southwest of the Iraqi city of Kirkuk on Friday, while bombs in Kirkuk, Baghdad, Samarra and Ramadi killed at least 27 people.

The Sunni Islamists have often battled Iraqi security forces and Shi'ite militias further south and west, but attacks in and around Kurdish-controlled Kirkuk have been less frequent.

Oil rose above $49 a barrel on Friday because of the violence in the oil-rich region.

Militants later detonated a car bomb at a hotel in Kirkuk city centre and clashed with peshmerga forces.

A peshmerga officer told Reuters his forces had recaptured the district of Mariam Bek but said clashes were ongoing in Tal al-Ward, Maktab Khalid and Mullah Abdullah.

Kurdish military sources said the peshmerga had repelled dawn attacks by Islamic State at different points along a more than 1,000 km frontline, including Khazer, west of Arbil, and Makhmur, further south.

"Maybe they are afraid the fight for Mosul has started so they are trying to show they can operate close to Arbil or Kirkuk," Roj Nuri Shaways, Iraq's deputy prime minister and a peshmerga commander, told Reuters.

At least seven other Kurdish fighters were killed by a suicide bomb at a checkpoint near the eastern town of Jalawla, 160 km (100 miles) southeast of Kirkuk, peshmerga and medical sources said.

More than 800 peshmerga have been killed in combat since Islamic State overran their defences in northern Iraq last summer, prompting U.S.-led air strikes.

The Kurds have now regained most of the ground they lost, but commanders complain they remain ill-equipped compared with Islamic State militants, who plundered Iraqi arms depots when they overran Mosul in June.

Kurdish Prime Minister Nechirvan Barzani told Reuters in an interview on Thursday that the U.S.-led coalition against Islamic State was inadequate and said U.S. policy would at best contain the resilient and carefully structured group.

Police sources said Sheikh Lawrence Metab al-Hathal, a former member of parliament and head of the Anizza tribe, and at least five others were killed when an oil tanker was rammed into his reception hall in al-Nukhaib, 400 km southwest of Ramadi.

Islamic State has sought to assassinate politicians like Hathal who fought al Qaeda in 2006-07 during Iraq's civil war and then ran for office.

Three civilians were later killed and at least 10 wounded in northwestern Baghdad when mortars landed in residential neighbourhoods, police and medics said.

Further north in the holy city of Samarra, suicide bombers targeted a security checkpoint in the city centre, police said, killing three members of the police and Shi'ite militias.

Police and militias later clashed on Samarra's western outskirts following another explosion there.

Samarra is symbolic for Iraqis. In February 2006 Sunni militants blew up a shrine, triggering revenge attacks by Shi'ites which tipped Iraq into years of sectarian violence.