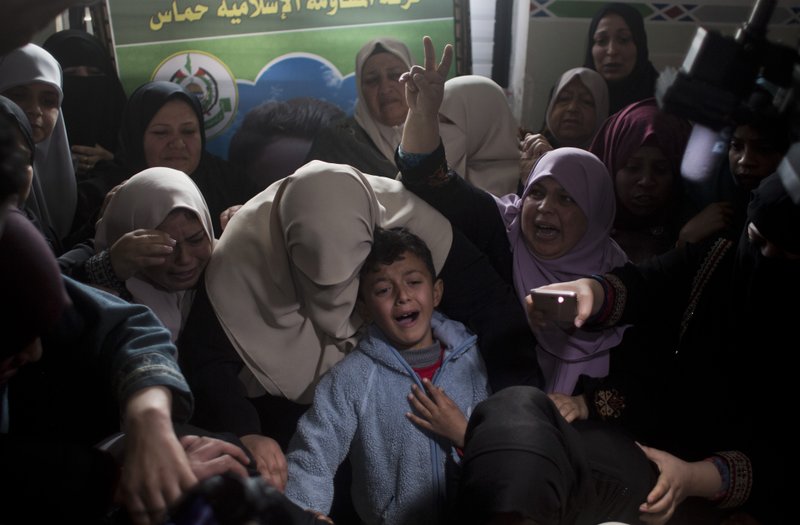 JERUSALEM (AP) — Israeli police said Saturday they arrested a Palestinian suspect in the killing of an Israeli teenager, as thousands of people in Gaza buried two Palestinian teenagers killed a day earlier in protests along the perimeter fence.

The police said the suspect was arrested in Ramallah, the seat of the Palestinian Authority, but originally comes from the southern West Bank city of Hebron. The police did not say when the arrest took place.

The body of Ori Ansbaher, 19, was found in the woods near Jerusalem on Thursday with stabbing wounds. She was buried Friday in the Israeli settlement of Tekoa amid calls by hard-line Jews for revenge.

Over 400,000 settlers live in the Israeli-occupied West Bank, which the Palestinians want — along with east Jerusalem — as part of their future state.

In the Hamas-ruled Gaza Strip, meanwhile, thousands of Palestinians attended the funerals of the teenagers.

The mother of 14-year-old Hassan Shalabi wailed as mourners brought his body on a stretcher for a final farewell at their home in the Nusseirat refugee camp.

“He was everything beautiful at home; his voice, his happiness fills the house. There is laughter and play when he is home,” said the mother, Fatma, soon after the body was carried away, wrapped in a Palestinian flag.

The two teenagers were standing 50-60 meters (160-200 feet) from the fence at separate protests when they were shot, according to rights group al-Mezan.

In Gaza City, mourners buried Hamza Ishtiwi. The Health Ministry put his age at 18, but Mezan said he was 17. Footage of Hamza lying on his back the moment after a bullet struck him in the neck spread on social media.

Gaza’s Hamas rulers have organized mass demonstrations along the frontier every Friday since March, in part to protest against the Israeli and Egyptian blockade on the territory, which was imposed when the Islamic militant group seized power in 2007. Dozens of Palestinians have been killed and thousands have been wounded.

The protesters frequently hurl rocks and firebombs, and Israeli soldiers respond with tear gas and live fire. Israel, which has been accused of using excessive force, says it does what it must to protect its borders.

The UN children’s agency condemned the killing of the two Palestinians, warning of the “significant violence” Palestinian children endure.

“Children are children. They must be protected at all times. Children should never be a target. Nor should they be exposed to any form of violence, by any party,” said the UNICEF Middle East director Geert Cappelaere in a statement.