Israeli Prime Minister Benjamin Netanyahu’s corruption trial resumed on Monday, with the 71-year-old set to formally respond to the charges against him.

The Israeli leader will officially enter his plea to charges of fraud, breach of trust and accepting bribes in three corruption cases.

Netanyahu made no immediate statement to reporters on Monday in the Jerusalem court building as he waited with lawyers for the session to begin.

On Sunday he told supporters he knew they wanted to support him, but said: “I urge you, for the sake of your health, for the sake of the health of all of us, don’t come,” in reference to the coronavirus pandemic.

The trial comes just weeks before national elections in which Netanyahu hopes to extend his 12-year rule.

What is the latest?

“I confirm the written answer submitted in my name,” Netanyahu said, standing before a three-judge panel in the Jerusalem District Court.

Netanyahu was referring to a document his lawyers gave the court in January in which they argued he was not guilty of the corruption charges.

Protesters gathered outside the courthouse could be heard inside the room where the hearing was taking place.

In recent months, Israelis have held weekly protests calling on Netanyau to step down over the charges and criticizing his government’s response to pandemic.

What are the cases against him?

Netanyahu, the country’s longest-serving leader and the first premier to be indicted in office, was charged last year over allegations that he accepted improper gifts such as cigars and champagne as well as trading favors with powerful media moguls.

One of the cases against him alleges that Netanyahu granted regulatory worth hundreds of millions of dollars to the owner of the Bezeq telecom company in exchange for positive coverage on its Walla! news site.

Netanyahu has slammed the charges against him as “fabricated and ludicrous” and has claimed to be the victim of an orchestrated “witch-hunt.”

Netanyahu’s ruling coalition collapsed in December, and he now faces a tough reelection in the March 23 parliamentary elections.

Monday is the second time that the leader is to appear in court. He last came to court in May at the start of a trial subsequently delayed by coronavirus lockdowns. The indictment was read out to him during the May trial.

The court is unlikely to reach a verdict anytime soon. The trial could take years.

If Netanyahu wins in the upcoming elections, he could try to secure parliamentary immunity, or pass laws to exempt a serving prime minister from standing trial.

Israeli law requires Cabinet ministers to resign when charged with criminal offenses but does not stipulate the case of a prime minister under indictment.

IMAGE: Protesters demonstrate against Israeli Prime Minister Benjamin Netanyahu as he attends a hearing in his corruption trial in Jerusalem. REUTERS/Ammar Awad 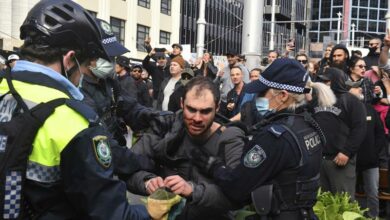