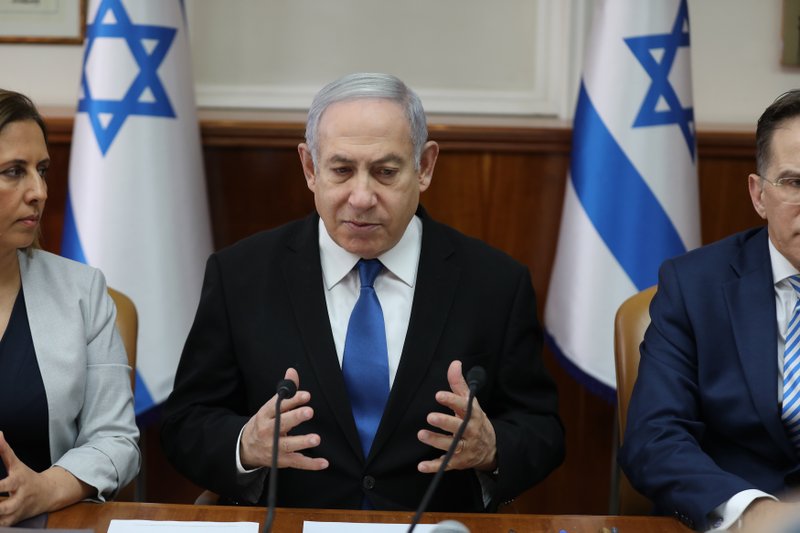 TEL AVIV, Israel (AP) — Looking to escape his legal and political woes at home, Israeli Prime Minister Benjamin Netanyahu was headed Wednesday toward a warmer embrace in Portugal for a meeting with like-minded ally U.S. Secretary of State Mike Pompeo.

It will be their first encounter since Pompeo announced a new American doctrine that does not consider Israeli settlements a violation of international law, the latest in a string of diplomatic gifts to Netanyahu by the Trump administration. The meeting with Pompeo offers Netanyahu another boost as he fights for political survival in the wake of two inconclusive elections and a damning corruption indictment.

With his back against the wall in Israel, Netanyahu will be seeking to project a stately image of business as usual and secure further American commitments for whatever time he has left in office.

Netanyahu has repeatedly said that Israel must take advantage of its relationship with the friendly White House before the U.S. gets bogged down in election season.

In particular, he hopes to win U.S. approval for his proposal to annex large chunks of the West Bank. Such a move would draw widespread condemnations from the Palestinians and much of the world and almost certainly extinguish any remaining Palestinian hopes of gaining independence. The Palestinians seek all of the West Bank, captured by Israel in 1967, as the heartland of their hoped-for state.

Before departing, Netanyahu said that his talks with Pompeo will “center foremost on Iran and two other subjects: the American defense treaty that I want to advance, and the future American recognition of Israeli annexation of the Jordan Valley.”

With Israel barreling toward its third election in under 12 months, such grand diplomatic plans appear to be on hold.

Neither Netanyahu nor his main rival, former military chief Benny Gantz, has been able to secure a parliamentary majority. If they cannot find a way out of the crisis by Dec. 11, new elections would be triggered.

Most observers believe a unity government between their parties, which together control a majority of seats in parliament, is the best way out of the crisis. But Gantz and his partners have ruled out a power-sharing rotation with a prime minister indicted of serious crimes.

Netanyahu and Gantz met Tuesday in a last-gasp effort, but the meeting ended without an agreement.

In Lisbon, Netanyahu is expected to raise his proposal to annex the West Bank’s Jordan Valley. Netanyahu has argued that Pompeo’s announcement last month on settlements has created a “once-in-a-lifetime opportunity” to annex the strategic area, seen as the breadbasket of any Palestinian state. Netanyahu said the policy shift “rights a historical wrong” concerning settlements, which are still considered illegal by most of the world.

Netanyahu is also expected to discuss with Pompeo the latest round of sanctions leveled against Iran. Netanyahu has been among the fiercest critics of the Islamic regime and the nuclear deal it signed with Western powers in 2015.

Israel considers Iran to be its greatest threat, pointing to Iran’s military presence in neighboring Syria and its support for hostile anti-Israel proxies across the region.

Netanyahu has welcomed the crippling U.S. sanctions against Iran, and following Iran’s deadly crackdown on protesters angry over rising fuel prices, the Israeli leader has urged the international community to impose sanctions as well.

Speaking to reporters on the tarmac at Ben Gurion Airport, Netanyahu said it was important to counter Iran’s armament with “more pressure.”

Netanyahu and Pompeo may also talk about an Israeli initiative to formalize already warming ties with Gulf states, who consider Iran a common enemy, by signing non-belligerency agreements.

Last week Israeli Foreign Minister Yisrael Katz said that he was “promoting, together with the Prime Minister, and in full support of the United States,” such pacts, but there is no indication that the Gulf states would be on board, or if it has even been proposed to them.

The high-profile meeting on European soil offers Netanyahu a respite from his troubles at home.

It is the first time in Israeli history that a sitting prime minister has been charged with a crime. Unlike mayors or regular ministers, the prime minister is not required by Israeli law to resign if indicted and Netanyahu is steadfastly vowing to remain in office where he is best positioned to fight the charges.

But without a parliamentary majority and the first signs of a rebellion brewing within his own ruling Likud party, he is amid the most uncertain chapter of his lengthy career.

Thousands of Israelis call on indicted PM to resign