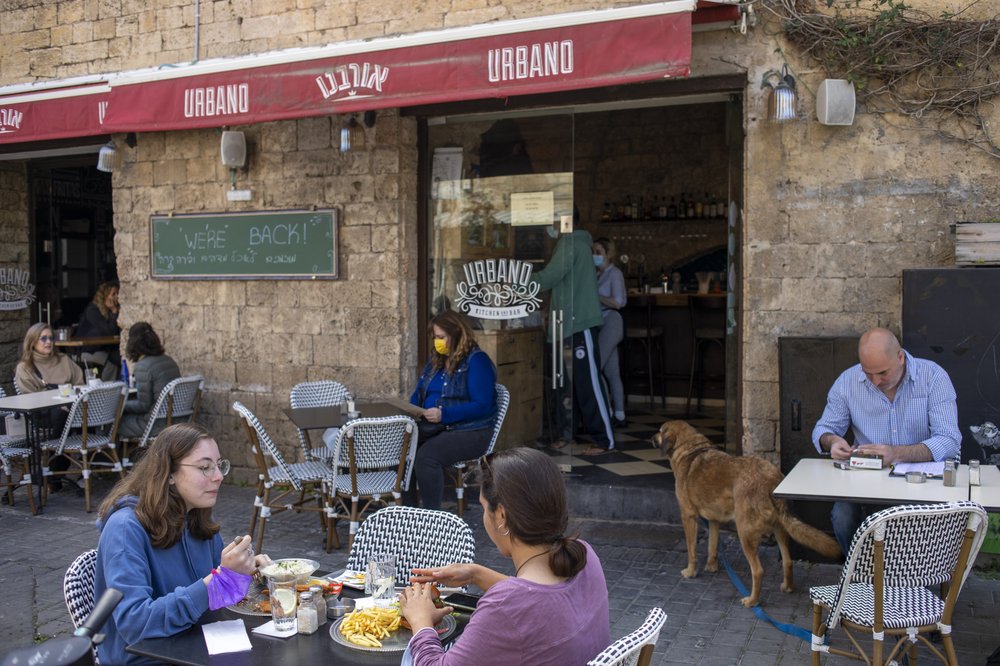 JERUSALEM (AP) — After spending much of the past year in lockdown, Tel Aviv makeup artist Artyom Kavnatsky was ready to get back to work. But when he showed up for a recent photo shoot, his employer turned him away. The reason? He had not been vaccinated against the coronavirus.

“He didn’t take me because I didn’t get vaccinated,” Kavnatsky said. “It’s discrimination, and it’s not all right.”

The breakneck pace of Israel’s vaccination drive has made it one of the few countries able to return to much of its pre-pandemic routine. Bars and businesses, hotels and health clubs have all sprung back to life in Israel, where some 80 percent of the adult population is fully vaccinated and new infections and COVID-19 deaths have plummeted.

While Israel provides a glimpse of what may be possible with high immunization rates, it also offers insight into the problems that lie ahead: Workplaces and schools are now grappling with what to do with those who refuse to get vaccinated as the next phase in the pandemic again pits public health concerns against individual rights and possibly new questions of equity. One case has already ended up in court, and others are expected to.

Airlines are already considering if vaccination, or a recent negative test, might be required for travel, as is the European Union. Some officials in Britain and the United States are exploring if proof of immunization could help large-scale gatherings to return, though there remains significant resistance to such measures in the US Whether a shot is necessary to go back to work or class is an even thornier question.

In many countries, the decisions may raise the prospect of further dividing populations along the lines of wealth and vaccine access. While the vast majority of the 100,000 Palestinians who live in the West Bank and have Israeli work permits have been vaccinated, immunization drives in the West Bank and Gaza have lagged far behind. Many parts of the world have received few, if any, vaccines.

So far, Israel has relied primarily on a series of incentives meant to encourage people to get a vaccine. It has established a “green pass” for the fully vaccinated whose holders can attend concerts, dine out, go to the gym or travel to popular vacation spots in places like Egypt, Cyprus and Greece. Those who do not have the pass are out of luck.

The system has worked well in areas of leisure and entertainment. But now, it is moving into other realms. Health officials have recommended barring unvaccinated workers who have not recently tested negative for COVID-19 from schools, elder care facilities and other high-risk workplaces.

Israel’s health care system has also mandated that all employees — doctors, nurses, administrators, and support staff alike — receive the coronavirus vaccine. If they refuse, they will be transferred to jobs that do not involve contact with high-risk patients.

Rights groups have expressed concern that such regulations could jeopardize workers’ income.

As the university resumes in-person classes, Eyal Zisser, its deputy rector, said that only students who are vaccinated can be physically present. Those who are not can continue to learn remotely.

“In the initial stages, we are bringing back some of the students according to the green pass and making lessons accessible to the rest of the students,” said Zisser.

Even with Israel’s success, hundreds of thousands of people remain unvaccinated — some who are opposed to vaccines in general but many who are hesitant to take a shot that was developed so quickly. UN, US and European health experts have said the vaccines authorized by Israel are safe and effective.

Kavnatsky, the makeup artist, objects to vaccines and modern medicine more broadly, saying he doesn’t want to put “any needles in my body.” He is not alone. He is one of over 15,000 members of a Hebrew-language anti-vaccine Facebook group who are critical of what they see as forced immunization by the state.

Rappeh, a political party headed by outspoken anti-vaccine advocate Aryeh Avni, garnered over 17,000 votes in last week’s recent parliamentary elections. That was not enough to get into parliament but illustrates the challenge for policymakers.

The Association for Civil Rights in Israel, a nongovernmental organization that deals with labor issues, said that the long-term application of the green pass raises a potential civil rights issue, and has called on the government to pass legislation on the matter.

“If there is going to be a policy that infringes on the right to employment and on the right for a person to choose what to do with his or her body in order to be employed, then it needs to go through the legislative process,” said spokeswoman Maya Fried. “There needs to be a public discussion.”

In the meantime, the debate is already playing out in the courts.

In the first major decision on the topic, a Tel Aviv labor court in March allowed a day care center to bar a teaching assistant who who refused to get vaccinated or undergo coronavirus testing. The decision is expected to be appealed.

Dr. Nadav Davidovitch, the head of Israel’s association of public health physicians, said he believes people have an obligation to get vaccinated, particularly given the evidence that the vaccine not only prevents the worst outcomes from COVID-19 but also may reduce the spread of the virus. Israel, with 9.3 million people, has recorded at least 6,188 deaths since the pandemic began.

“We see vaccination as a solidarity act, not just an individual choice,” he said.

Still, he said he opposes forced vaccinations or firing people for refusing. Instead, he favors alternative approaches, from education to persuasion. Those who continue to refuse can perhaps be given different jobs, work remotely or undergo frequent testing.

Davidovitch, a former military epidemiologist, has experience with the issue. He said that well over 90% of Israeli recruits who did not want to be vaccinated when they enlisted ended up agreeing once they were educated by medical experts.

“I think it’s a bad idea to move quickly to compulsion,” he said. “Most people are hesitant. They are not against vaccination in general.”

World leaders call for pandemic treaty, but short on details